It is snowing again. I was sorely tempted to be all whiney and pitiful with the “I haaate snow! I haaaate driving in the snow. Why does it have to snooow?" but, then I remembered that my younger sister has been without power in her home since last week’s freak ice storm and I was shamed into silence.

Seriously, days on end without power, can you imagine? We once went four days without cable and I thought I was going to have to resort to eating my children just for the entertainment value. A week without power, this close to the holidays? Mercy.

On the positive side, my mother is winging her way to my sister’s side even as I type this and no one can handle a crisis like my mother so; my sister will have a memorable Christmas even if they have to do it Little House on the Prairie style.

In other news, The Girl is sick. She has a sinus cold that is totally kicking her in the tail. Last night, I drugged her into a state of oblivion and Hugh had to carry her up the stairs to her bedroom. Since, at the age of ten she is all gangly arms and legs, the result was that Hugh resembled a two-headed monster with six arms, a limp and asthma as he labored up the stairs with her in his arms. Much comedy ensued.

Speaking of comedy, yesterday, in a fit of Christmas Spirit, I purchased a holiday sweater. I call it my old lady sweater since it is pretty much what all the ladies in the blue-haired set are wearing this season and I calls 'em like I sees 'em. But, in the sweater's defense, it does just scream HAPPY HOLIDAYS! so I am wearing it with pride. 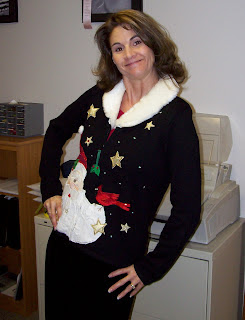 And, look! It has magical powers that make me look exceptionally thin! Maybe those old ladies are on to something.

Although......on second thought, it also appears to make me look a lot like the postman on Santa Claus is Coming to Town so...

UPDATE: DIA is closed due to the blizzard in Denver. My parents are stranded at the airport so, the only thing my mother is winging her way to now is a nervous break-down. Good thoughts would be appreciated.
Posted by Chelle at 10:22 AM