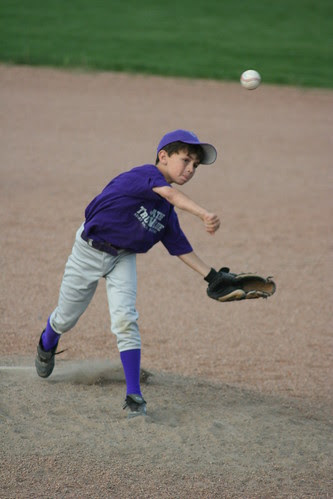 One of our regular pitchers has been benched for the season following an incident at school wherein he non-maliciously plagiarized an author’s work. I say it was done non-maliciously because the kid doesn’t have a dishonest bone in his body and because I know it will never happen again; he has now learned to credit his sources... the hard way.

In his absence, the Man-Cub has been called up to the pitcher position and he did a great job at last night’s game; the practice he and his grandpa did over the weekend really helped and he managed to pitch a no-hitter in the first inning he pitched, without beaning a single batter.

In keeping with today’s “three strikes” theme, the Teenager has been “dis-invited” to attend the last field trip of the school year as her behavior at school the past week has not been up to the standards set by the faculty.

Hugh and I met with the principal at the school yesterday and, after a long and involved (read: tearful) conversation with him and with the Teenager, we all arrived at the conclusion that, although a large part of her really wanted to attend the trip with her classmates, an even larger part of her was afraid to go. Because the trip is to a large reservoir, nearby. A reservoir with running water which, apparently, has become my daughter’s Kryptonite.

The anniversary of Brandon’s drowning is looming, the Teenager has been having nightmares about drowning with him and, Hugh and I, perfect parents that we are, missed every sign that she was struggling; she asked us both several times if one of us could accompany the class on the trip, she “misplaced” the permission slip for the trip, at a recent birthday sleep-over which featured swimming in an outdoor pond-she called and asked me to bring her a couple of inflatable rafts and yet still opted to sit in the sun rather than swimming, she made Hugh promise-on several occasions-that he will never drive the boat fast when she is on the tube behind it, she has been generally disinterested in the boat-which she was thoroughly excited about last fall-and she has been moodier than usual (even for a teen).

Yep, missed it all. My daughter subconsciously sabotaged her chances of attending a fun activity because she was scared and I never saw it happening.

I feel like the biggest parental failure in the world and I have no idea how to comfort her; this is a child who started swimming before she could walk. She has always loved the water;-we still can’t get her out of a swimming pool for love or money- and yet, she is apparently terrified of running water and larger bodies of water and I didn’t even know it.

I didn’t know she was having nightmares, either although, she assures me that the dreams just started the past couple of weeks and I am somewhat inclined to believe that the vividness of the dreams may have something to do with the Claritin that she and her father have been taking recently for their allergies as Hugh claims more vivid dreams lately, as well.

Still, epic failure on my part.

Strike one, not seeing the signs.

Strike two, not knowing to look for the signs and assuming that, two years later, she would have moved past the worst of the grief.

The worst part is, I don’t get a second chance to bat at this; there is no eighth inning in parenting, you just take your loss and you hope for a better game against the next opponent and you hope like hell that your child sees the balances between wins and losses on your record and that they forgive you for the times that you come in last.

But nobody tells you that when you sign on to play the game in the first place.
Posted by Chelle at 8:23 AM

Poor girl! You know now, and will do everything to make her feel better and deal with her fears, I know that about you!

Oh Chell, you can't always know everything, even when the signs are all right there. You guys are GREAT parents and like everything else, you will find a way to help your daughter with this. Keeping you guys in my prayers.

You know, what do you do? It's hard enough for an adult to cope with grief, but to be her age and have to try to get through it and make sense of it - well, I just can't even imagine. Just know I am thinking about you and her and praying for both of you. And all of this just makes me want to go hug my baby girl.