Our trip to the lake for the Man-Cub’s birthday party went very well. The kids got more than their fill of playing in the woods, rock climbing, fishing and cavorting about like lunatics escaped from the asylum.

Jana and I should have been playing the part of warden to the lunatics, I suppose, but; we were too busy taking pictures of the changing aspen leaves and drinking Irish coffees to bother with our duties. Chris and Hugh were likewise engaged in manly endeavors such chopping wood, stringing new line on fishing poles and doing a lengthy quality check on the Cub’s new compound bow (must make sure the weaponry is in good working order, AKA: play with the new toy before the child does) and were, therefore, too busy to supervise the lunatics.

The kids were fine, of course; they are all of an age that they can play without being shadowed by their parents, even in the wilds of the forest and, that? Is awesome.

The cabin that Jana’s mom and step-dad live in is located on a river just below a dam that houses a reservoir stocked with fish so; we had a chance to fish both by trolling from the pontoon boat and from the riverbank. The Cub would like you to know that he caught one of the two fish that we managed to snag and that it was this big which, for the record, it so was not but, it was his birthday party so; you didn’t hear that from me.

The Cub would also like you to know that he loves his new bow and that he is a really good shot, already; in fact, he is so good that he can promise that he will not shoot anyone’s eye out nor will he accidentally shoot any neighborhood animals, children, old folks or random strangers as they walk through the neighborhood for crying out loud, motherrr! 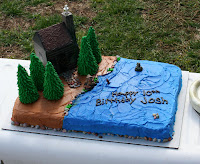 At least, that’s what I heard. Considering the massive amount of sugar that I consumed by eating a slice of birthday cake with an Irish coffee chaser; I may have been mistaken.

And, I continue to say that it’s all fun and games until someone takes an arrow in the heinie so I will fret nervously every time the Cub practices with the bow.

I don’t care how many birthdays go by; that will always be my job.