There Was a Farmer Who Had a Dog and Bingo Was His Name...

I am not a farmer but I do have a dog. His name is not Bingo, but I went to Bingo last night. I feel like that could be a whole other song.

Speaking of my dog; Boomer ended up in the vet equivalent of the emergency room on Friday. He was playing fetch with the Man-Cub when he hurt his paw. The Cub wasn't sure what happened, but we suspect that he caught his nail on the concrete pad under Hugh's man gazebo as he chased the ball. The nail was ripped pretty far down and he was bleeding profusely and limping.

The Cub did a great job of getting him cleaned up and wrapping the paw, but I decided to come home from work and take him to the vet, in case he needed antibiotics and pain meds, which, he did.

The vet was booked for the day, but they have a drop-off program that allows you to take your pet over to hang out and the vet will squeeze in a quick look in between appointments. So, while Boomer was waiting, I was able to go back to work for a few hours.

As an aside, when I dropped him off, he literally threw himself on the ground and refused to walk for the vet tech. She was actually dragging him back to the holding area, which, was no mean feat since he weighs close to 100 pounds and she looked like she would snap like a twig in a high wind. She finally told me to leave because "sometimes that helps". Like dropping a toddler off at daycare, I'm guessing; my own children never threw themselves on the ground in a tantrum to get me to stay.

My dog is definitely a momma's boy.

Anyhoodle, when I picked him up $220 dollars later; he was suuuuuuper dopey since they had to sedate him to work on his paw. I had to run Lola through the carwash and, unlike his normal reaction to the Monster Who Dwells in the Water Cave (he haaaaates the carwash); he was completely mellow and just gazed at the lights, brushes, and rivulets of soapy water running down the windows like, Duuuuude, do you see the rainbow? He was trippin', is my point.

When we got to my office, he passed out on my rug, where he slept with his eyes open until it was time to go home. He's doing great, but will be on the meds for a few more days. He will also have to wear a boot once the bandages come off. I'm fully prepared for that to spur his next toddler tantrum. 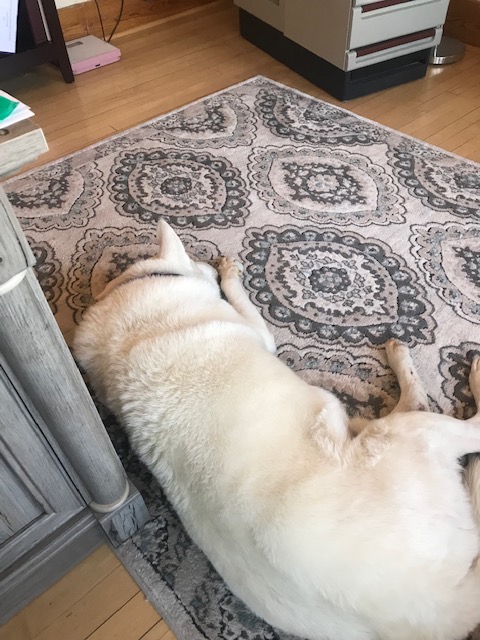 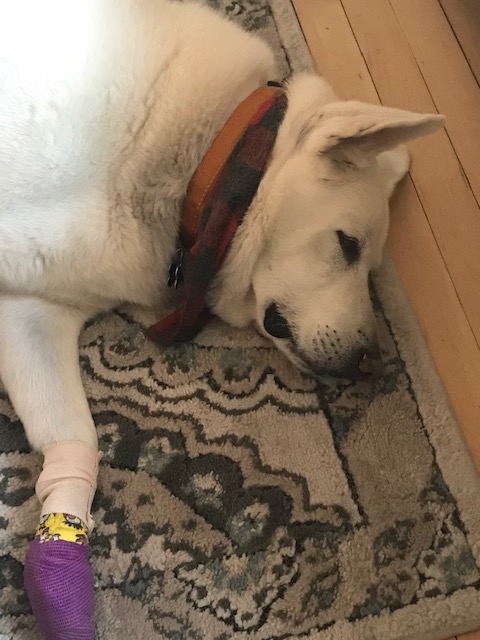 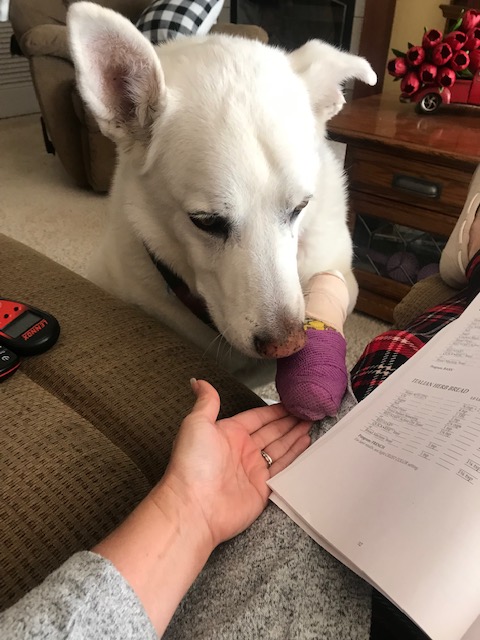 And, speaking of Bingo, which is the other topic of this post, lest you have forgotten (which I almost did); last night, Hugh, the Newlyweds, and I went to the Petticoat Junction chapter of the American Legion to play a rousing few games of Bingo.

How did this come about, you ask?

Kristi drives by the Legion Hall every night on her way home and she had noticed that there were always a ton of cars parked outside on Friday, Saturday, and Sunday nights. So, she slow-rolled past one night and saw the sign on the door, advertising BINGO! and, she was intrigued. Petticoat Junction doesn't have a lot going on, as you can imagine, so... 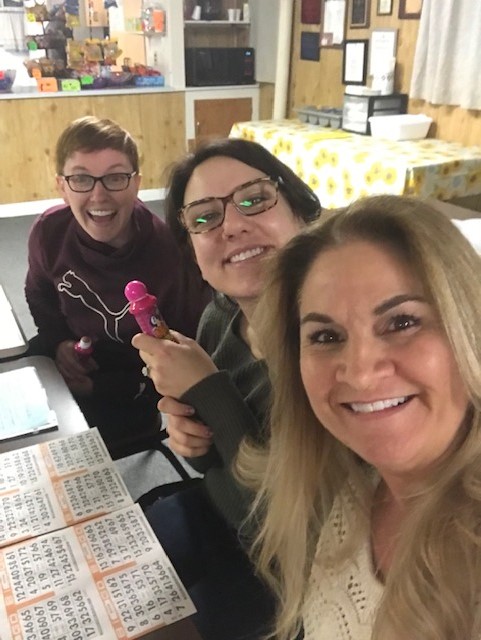 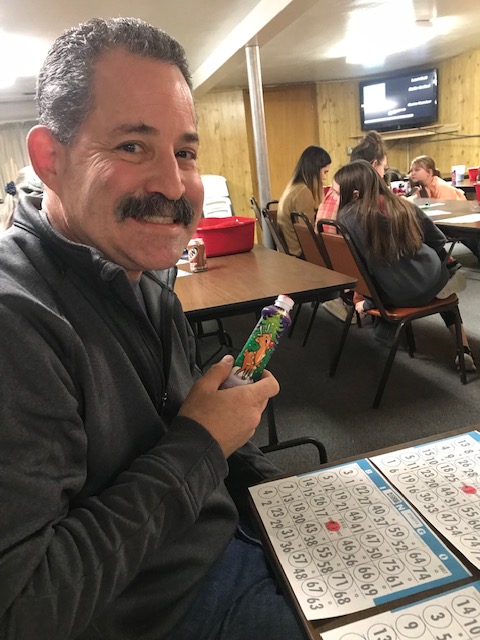 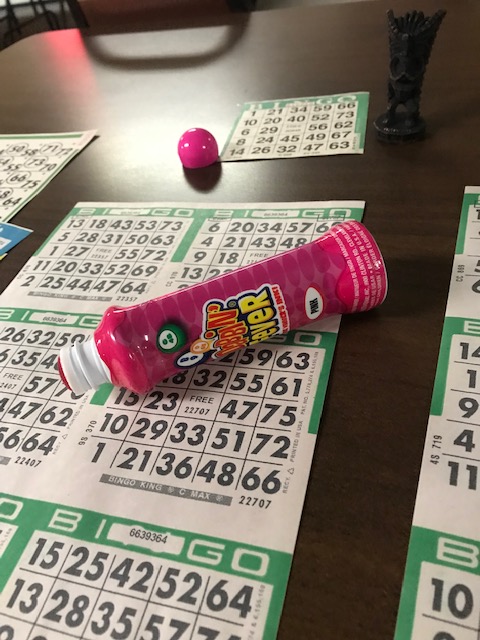 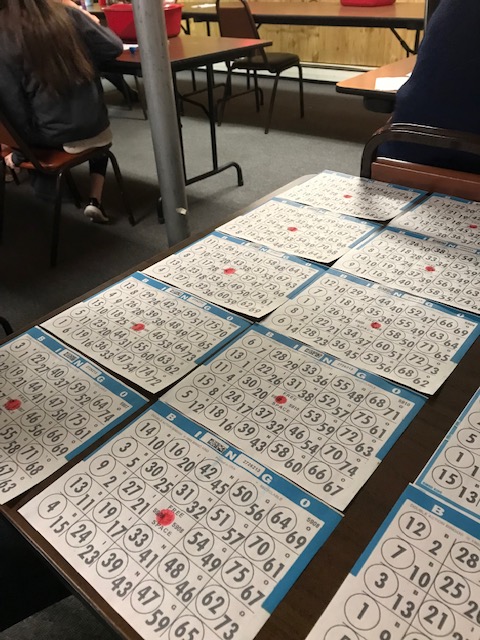 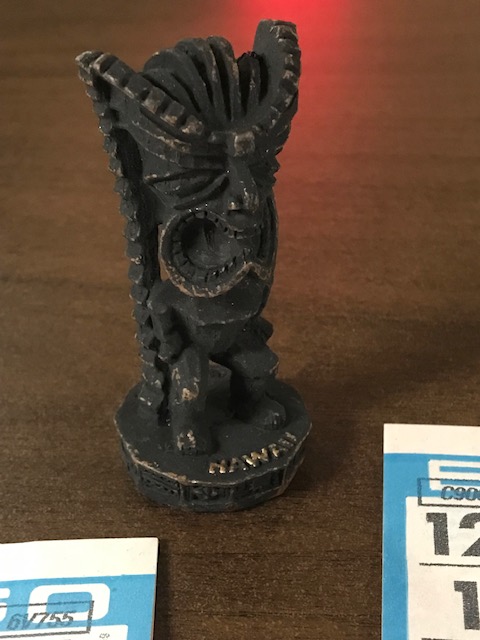 I even took my the Money Tiki that we got in Hawaii. I thought it would bring me luck...not so much

To say that we were like fish out of water would be a vast understatement of our situation. The second we entered the building we were regarded with suspicion generally saved for masked bandits in a bank. Kristi being Kristi, was oblivious to the stares and marched right up to the counter, where we spent the next five minutes negotiating the price on a packet of cards, dabbers, and special games (on which we took a pass, thank God, because it was hard enough just to catch on to the regular games).

American Legion Bingo is not the bingo of my youth, y'all.

Did you know that there are like, a million ways to play Bingo? It's not just horizontal or vertical lines! There's Blackout and Progressive Blackout and Broken Frame and Double Action Blackout and I can't even remember because it all started to blur together right around hour two.

Thankfully, the regulars took total pity on us, once they determined that we were, in fact, completely stupid and not hustlers out to steal their jackpot. And, while we didn't win any money, I did win a door prize when we played Standing Bingo, which is a game where everyone gets a small Bingo card, stands up, listens as the balls are called, and sit down if any number on your card is called. Last man standing gets the prize, and, last night, that was me.

It should be noted that Kristi was super jazzed to play Last Man Standing and she was out, literally, on the first number called. It didn't keep her from being enthusiastically happy for me when I won my new fuzzy blanket. She's such a good sport.

After Bingo, we came back to the house for charcuterie board and wine and to spoil my dog with "accidentally" dropped cheese and sausage. We briefly toyed with the idea of changing his name to Bingo and all agreed...no. Just, no.

When I asked the Newlyweds if we were going to make ourselves regulars at the Legion Hall, Erin was up for it. Kristi, not so much. She kept referring to our adventure as an "excellent cultural experience", though not one that she feels the need to repeat, and, since she "accidentally" left her brand new dabber at my house, I'm guessing our Bingo days are over.

In hindsight, she may just be jealous of my fuzzy blanket. 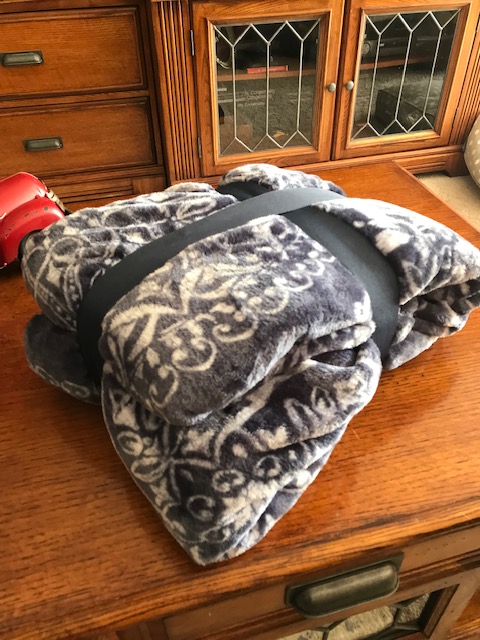