The boys host the first basketball tournament of the season, today. It's a scrimmage tourney, so it won't count toward the team's record, but, it's great practice for the boys.

It's also a lot of work for the coach and the Boosters, since we use the opportunity to host the games as a fundraiser. This morning, I am browning ten pounds of hamburger for the taco bar that we are having, then, in between games, I will be manning the concession booth to sell those tacos. We are also going to set up a Pirate Wear table, to see if we can push any of our old merchandise before the new stuff gets here.

The Man-Cub has two games today, one at 1:00 and one at 4:00, so I will have plenty of time to work both booths in between games. Mom is scheduled to arrive at some point, today, to watch the games and, she will be staying for the week leading up to the Thanksgiving holiday, which is nice.

Hugh is in Nebraska for a college wrestling tournament and The Teenager and Katie made a surprise visit to the Front Range, yesterday, to visit with their old roommates from UNC, so, in addition to working the tournament, I will be worrying about them all driving home tomorrow (there was a huge mountain snowstorm yesterday and it took them nine hours to drive to Denver; I can't imagine the roads will be much improved by tomorrow).

I also need to stop in at the hardware store, to do yesterday's receipts and payroll, plus, I should probably start thinking about the food prep for Thanksgiving...

...or, I could just take it one minute at a time and enjoy watching the boys play some basketball.

Facebook seems to think that's an excellent idea; it shared this old memory to my timeline this morning: 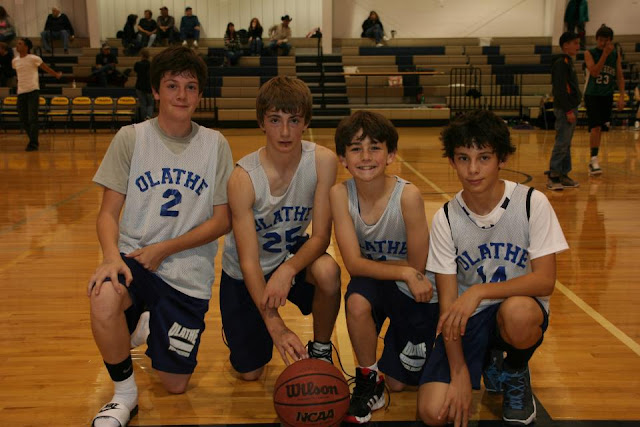 That was taken four years ago, and, while only two out of four of The Fearsome Foursome are playing basketball this year (Mikey and Tones opted out), it still made my heart go pitter-pat.