The Fourth of July holiday looked a little different for everyone this year; for some, that may have been a good thing, for others, maybe not so much. For us, it looked similar to years past, if on a slightly different scale. 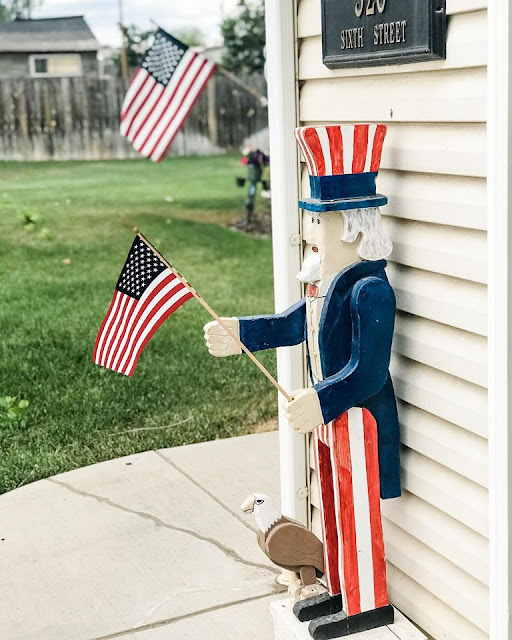 We didn't take the boat out. We didn't meet up with Jana and Co. We didn't host a big BBQ or entertain friends on the porch, although, I did do that Friday night, when The Lesbians came over for Limoncellos and a charcutterie board, followed by their introduction to our Colorado fireflies, whose existence they heartily disbelieved in, until they saw them. 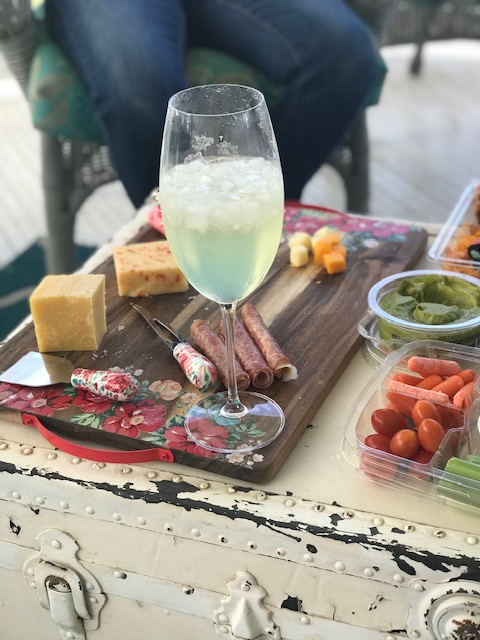 We did relax a bit. We slept in. We made a picnic. And, we took the new paddle boards to the lake in Pixler for their maiden voyage. 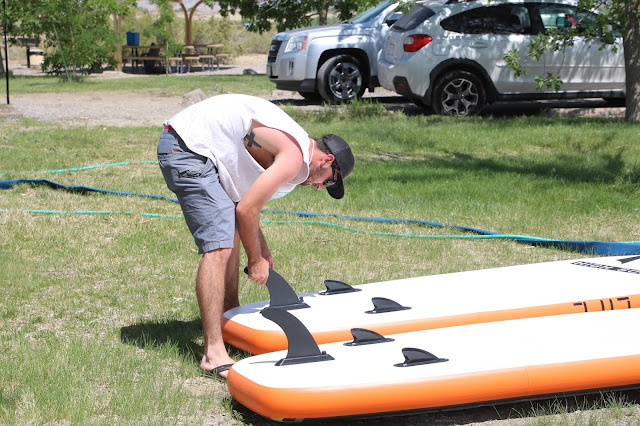 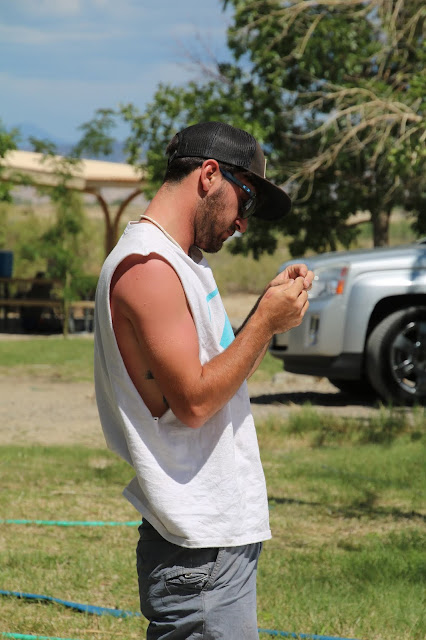 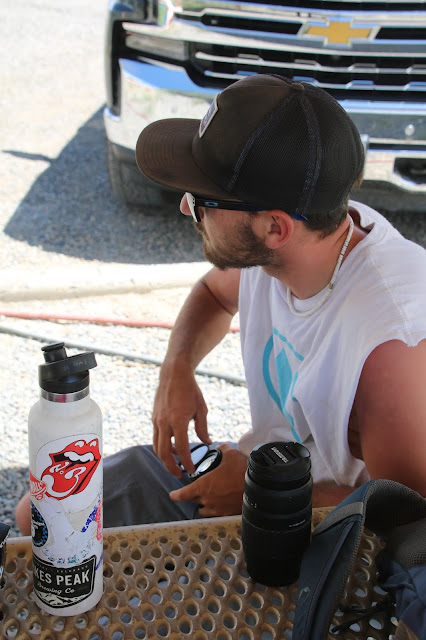 Queen B, who was in a wedding in Mayberry on Friday night, was unable to go with us, but, the Man-Cub, Hugh, and I tore it up. Tore it up being a statement relative mostly to the Cub, who has his sea legs, thanks to all the time he spends on floating devices in Hawaii. Hugh and I? Not so much. But! We did it! And, I take a small wicked pleasure in bragging about not being the first to lose their balance and go ass over tea kettle into the lake (although, in the interest of full disclosure, I wasn't far behind Hugh). 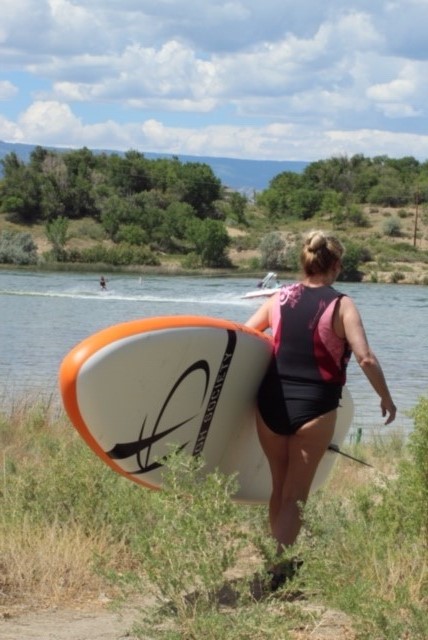 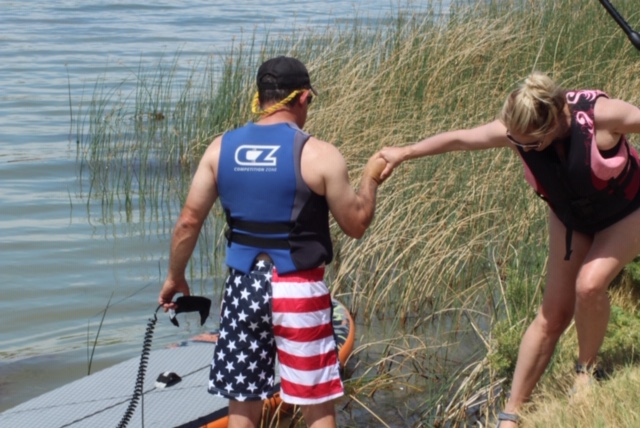 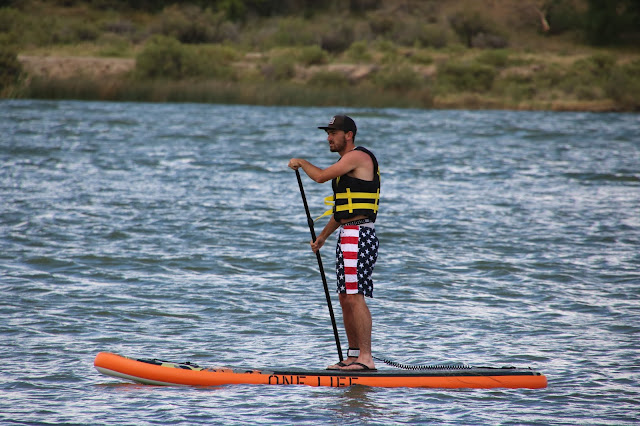 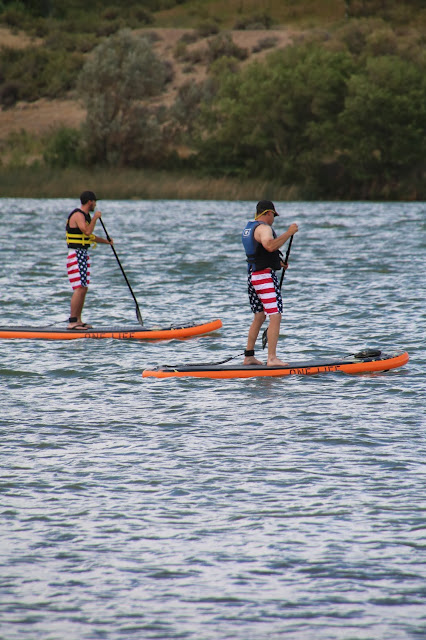 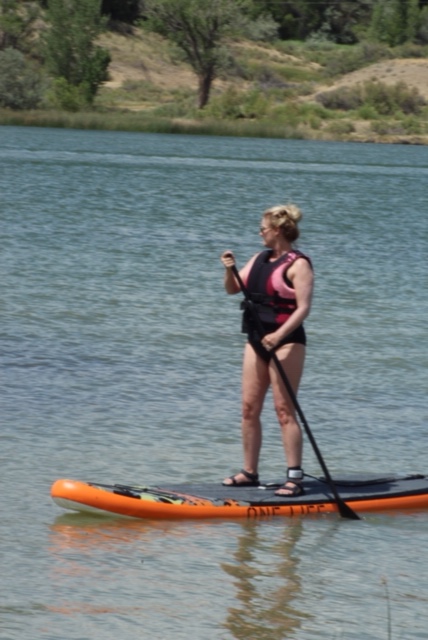 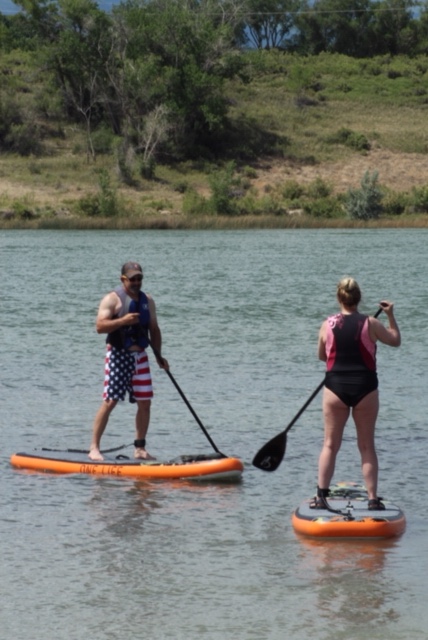 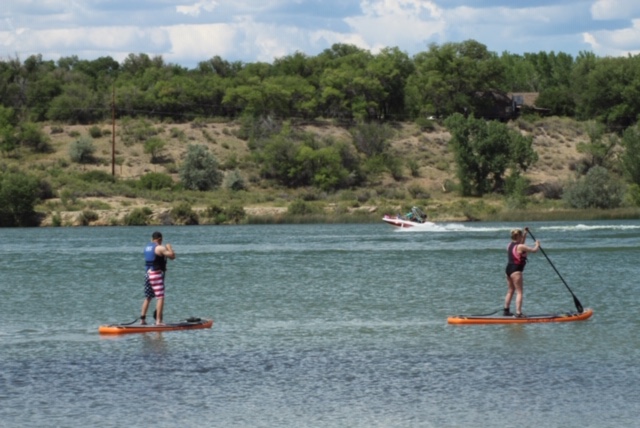 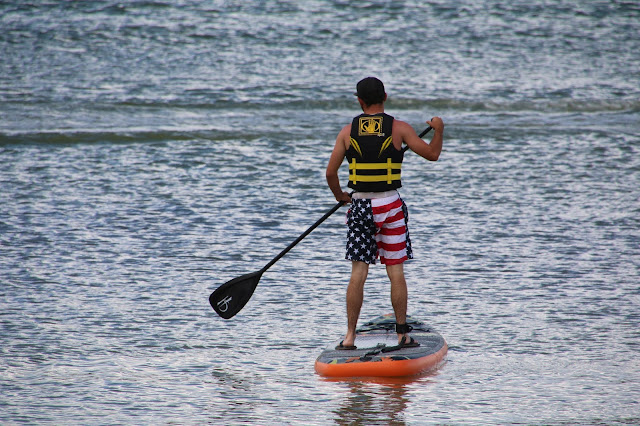 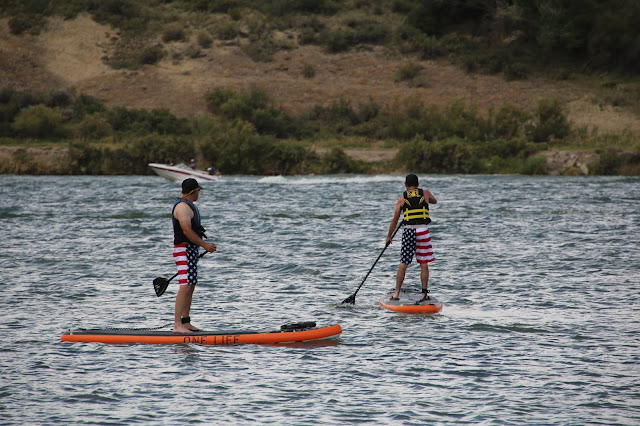 That would be this girl.

And, it shows. These pictures are clear evidence that it is past time for me to get back into the gym. The fact that last week's hours-long ATV ride left me writhing in pain all week (including back spasms this weekend) should have been my first clue, but, yeah; these pictures confirm it.

Anyhoodle, my impersonation of a sea cow aside, it was a nice way to spend the afternoon. We packed up when the wind picked up and the skies threatened rain, went home for showers and dinner, and then drove back to Pixler to take in the only fireworks show in the valley. It was a decent show, my only complaint would be this reminder of the Covid-19 virus... 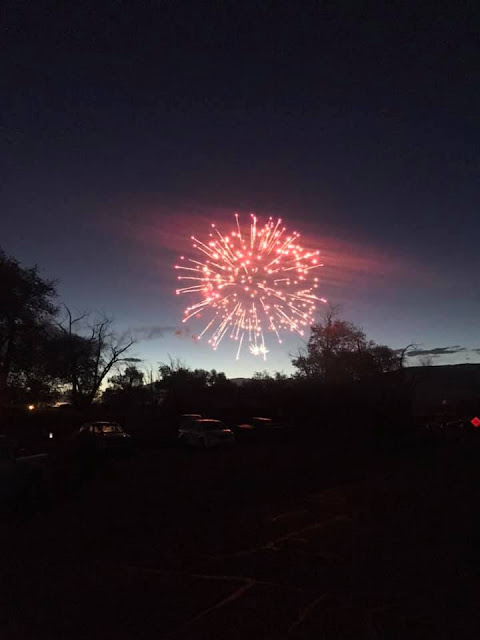 ...I mean, that really looks a lot like it amiright? 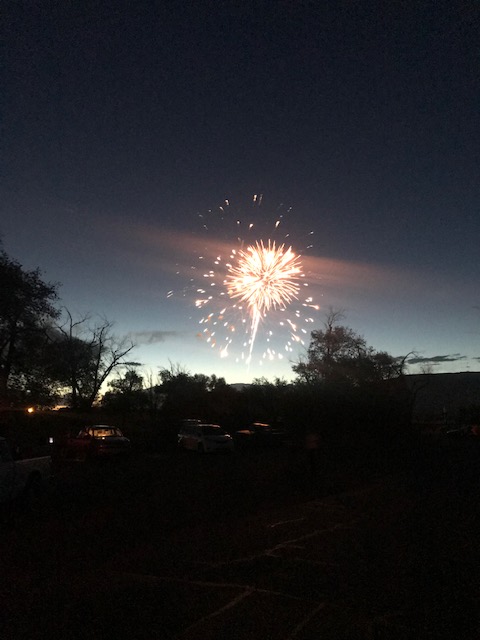 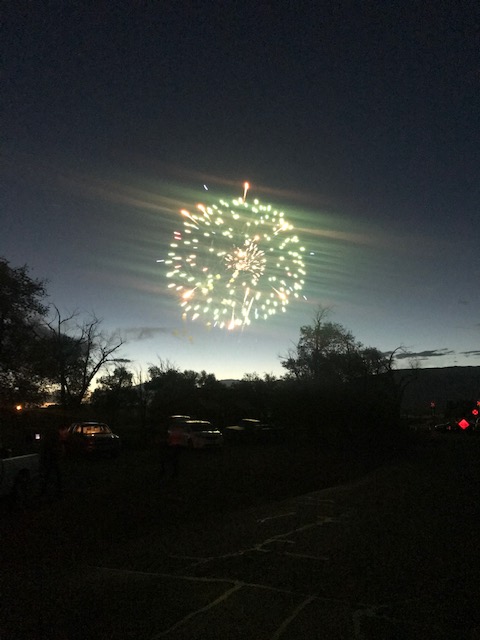 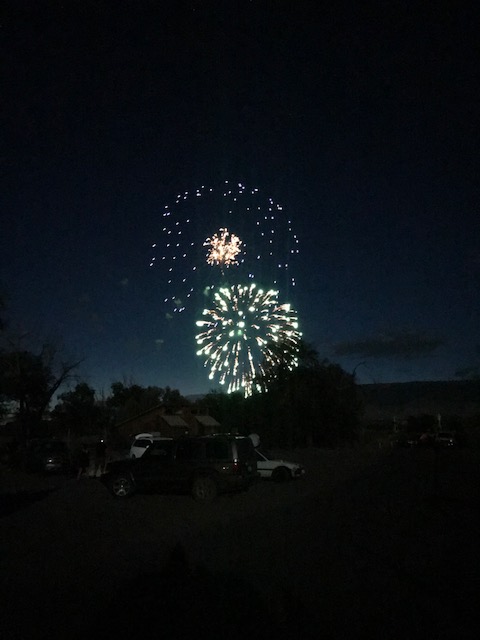 Otherwise, great show, second only to the amazing effort put forth by the neighborhood in which we parked to watch; those folks had clearly invested some major cash in illegal fireworks and they weren't afraid to use them, despite police presence on pretty much every street corner. 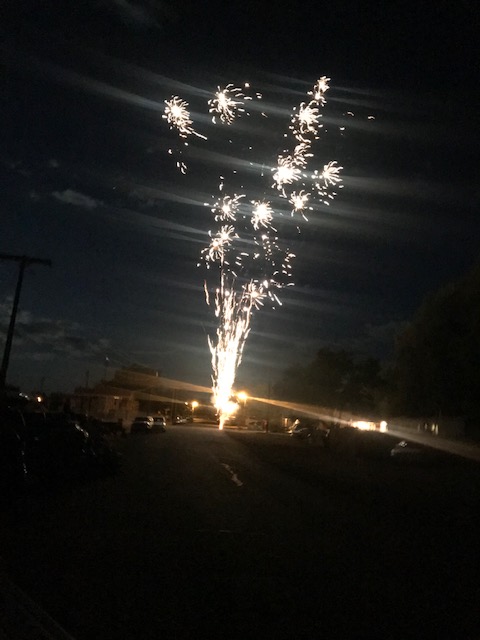 Today, I am planning to relax a bit more before heading back to New Job tomorrow; the week ahead is going to Suck, with a capital S and I'd like to put off thinking about it for as long as humanly possible. I think I will accomplish that with a good book and a bowl of homemade ice cream on the porch.

Or, I could get my lazy ass in the gym (scrolls up to the pictures on this post)...yeah...probably the gym.