It Takes a Village to Raise a Child; I Need a Child to Raise My Village

I spent most of this past weekend assembling my Dept. 56 Dickens village pieces into something resembling my vision of London as described in A Christmas Carol.

The effort required twelve hours, five extension cords, and approximately ten billion trips up and down a six-foot ladder; the end result was definitely worth the labor, but, I have to wonder how much faster it would have gone had I had a helper.

Hugh did his part; he helped me get the numerous storage boxes containing the village out of the attic and downstairs to the living room. He then left on a two-day hunting trip, and, I can't blame him; I have a pretty singular focus when I am in village construction mode, so I would have been very poor company, indeed.

I do miss the days when the Man-Cub was home to help, however. He never minded the village chaos, but could manage to simultaneously hand me buildings, accessories, cords, and trees while watching television, texting his friends, and snacking. He's quite talented.

Anyhoodle, I finished the village and still had time (and energy; shocker!) to put up the rest of the indoor Christmas decorations, minus the tree (I'll get to that this coming weekend). It feels a bit strange to have this done so early, but, I am really looking forward to relaxing with family during Thanksgiving and Christmas, so, the more I get checked off my holiday To-Do List, the better (more on that To-Do List in an upcoming post. Probably. Maybe. Who the hell knows these days?)

Up next: Decorating the porch and yard. 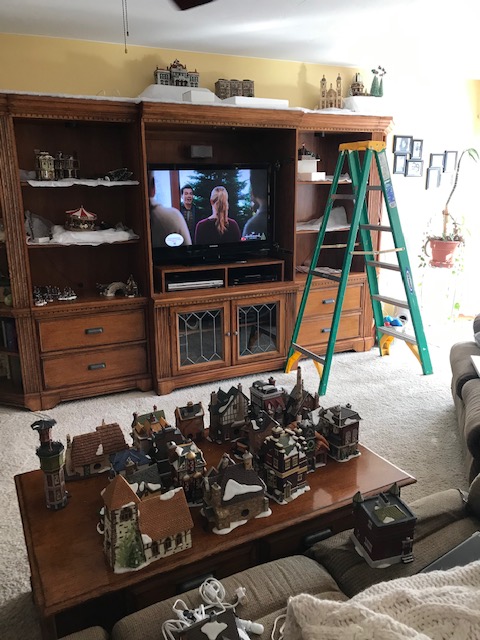