I suffer from a little-known condition known as Turkey Dysfunction. It presents as a total lack of recall about the steps involved in cooking a turkey, and, there is only one known cure: call Mom, STAT.

I know, I know, I'm a mom, but, that doesn't stop me from calling upon the wealth of knowledge that is my Mom. Case in point: yesterday, I had to text her on two separate occasions, once to ask if the turkey starts at 400 degrees for fifteen minutes, or thirty, and, once again to ask if the oven then gets turned down to 350 or 375.

Thank goodness she was available to reply.

In the event that I find myself unable to recall the specifics of turkey cooking next year, I thought I should go ahead and write myself a little reminder. Hence, this post. So, here is Turkey Cooking 101, according to Mom.

Step one: Make sure turkey is sufficiently thawed. This year, my turkey only weighed thirteen pounds, so, I transferred it from the freezer to the fridge five days before Thanksgiving. That was plenty of time, and, while there was still some crystallization in the cavity of the bird, the giblet packet and neck slid out with just a minor tug. 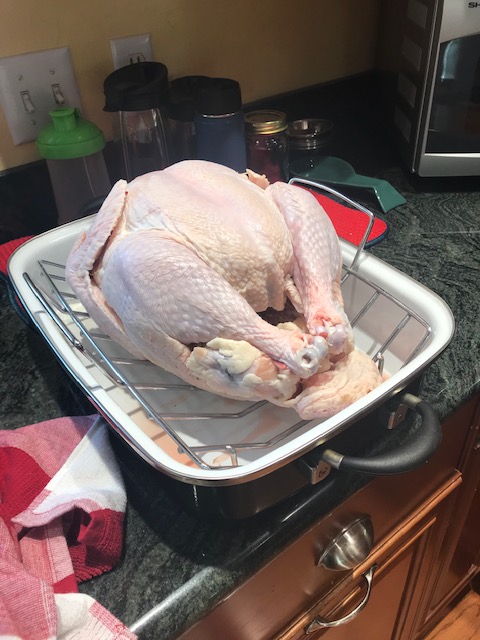 Step two: Place turkey in roasting pan. At this point, I gently wiggle my hand underneath the skin on the breast, separating the skin just enough to make room for me to follow with a good half stick of butter,  massaged into the breast meat and then another half stick, massaged onto the outside of the skin.*

*Not pictured, because my hands were coated in butter, which make handling a camera rather difficult. It also made my hands soft as a baby's butt. Bonus!

Step three: If you are on Team Stuffing Inside the Bird, now is your chance. Loosely pack prepared stuffing into the cavity. Place remaining stuffing into a casserole dish for baking separately, so that the whiners on Team Stuffing Outside the Bird are also happy (bet you can't guess which team I'm on). Insert meat thermometer into the thickest part of the bird's thigh, tent the roasting dish with aluminum foil, and place in 400 degree oven for fifteen minutes (thank you, Mom). 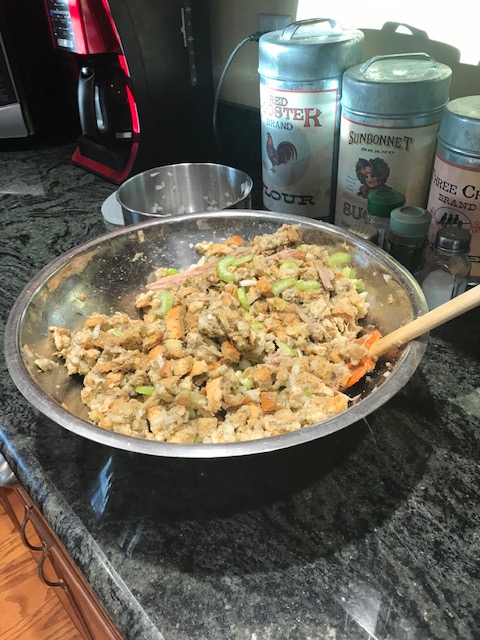 Step four: After fifteen minutes, turn the oven down to 350 and bake turkey for about 20 minutes per pound of bird, assuming it is stuffed (15 minutes per pound if unstuffed). After the first two hours of cooking, baste turkey with pan juices. 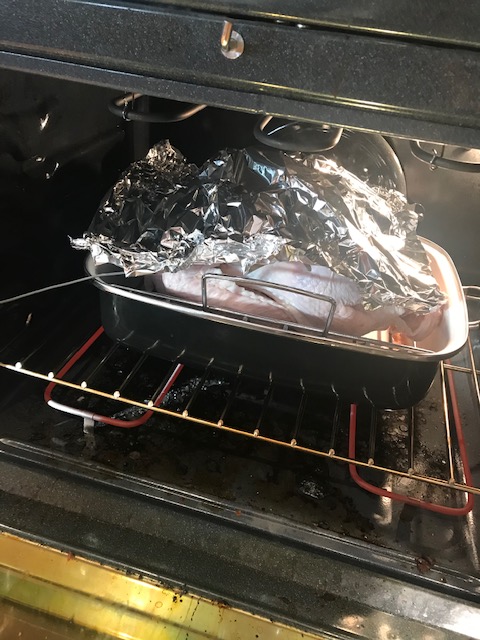 Step five: Uncover the turkey for the final hour of cooking time, basting occasionally, until golden brown. Once thermometer reaches 165 degrees, remove pan from oven, tent with aluminum foil, and allow to set until slightly cooled. 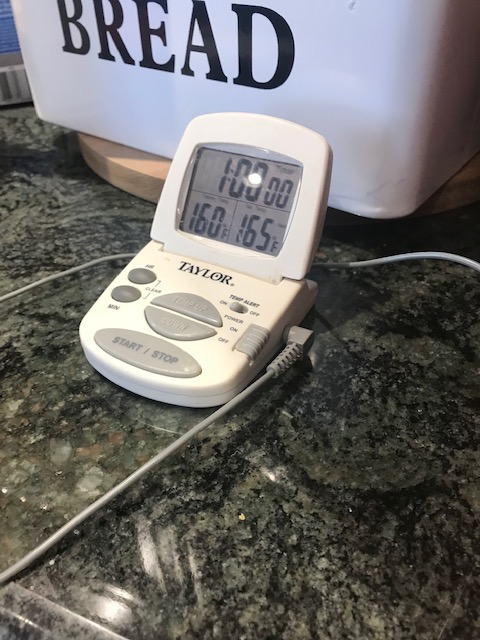 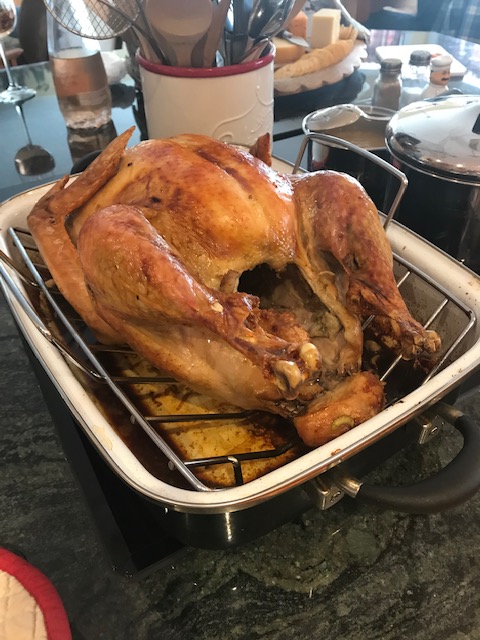 Step six: Remove stuffing and carve the bird; start by removing the legs, followed by the wings. Next, cut the breast, down the center, removing east side in one piece, which, you will cut into slices, the thickness of which is dependent on personal preference. Remove remaining meat from the carcass, arranging neatly on a platter for serving. 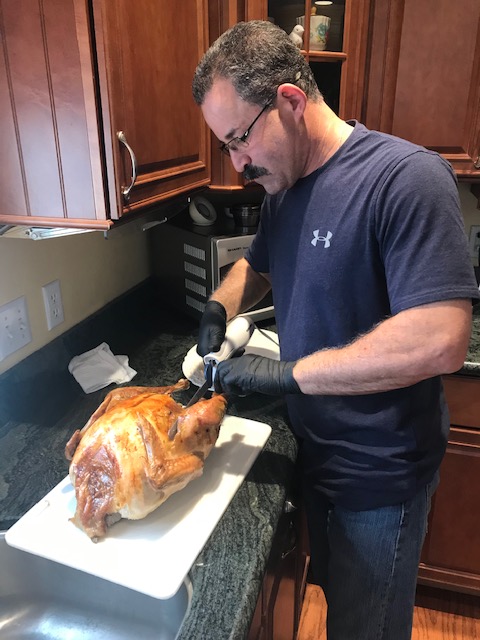 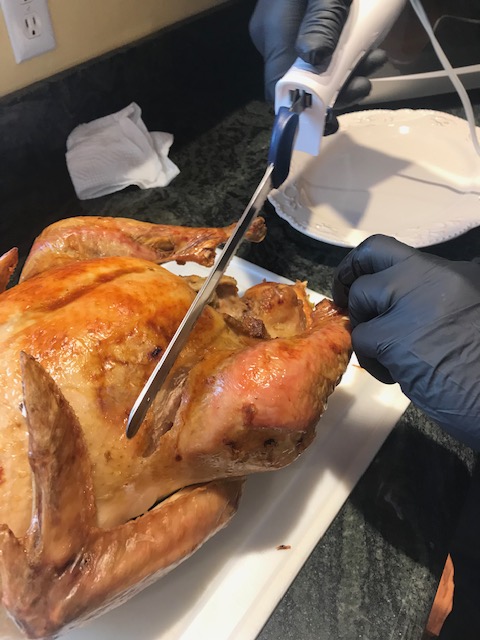 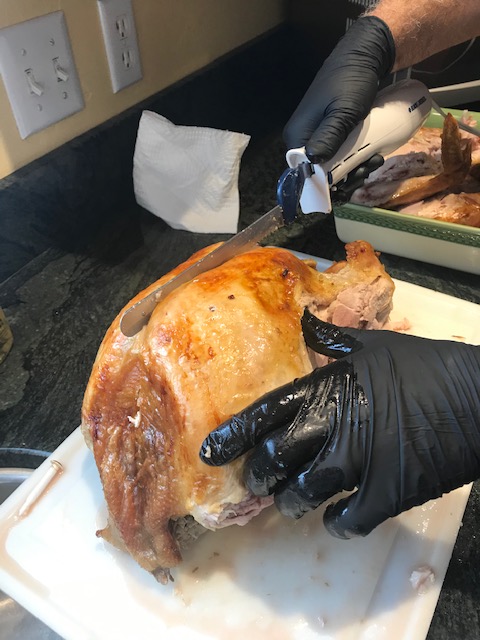 Et voila! Perfectly cooked turkey for your holiday meal! And, you won't even have to call your mom! 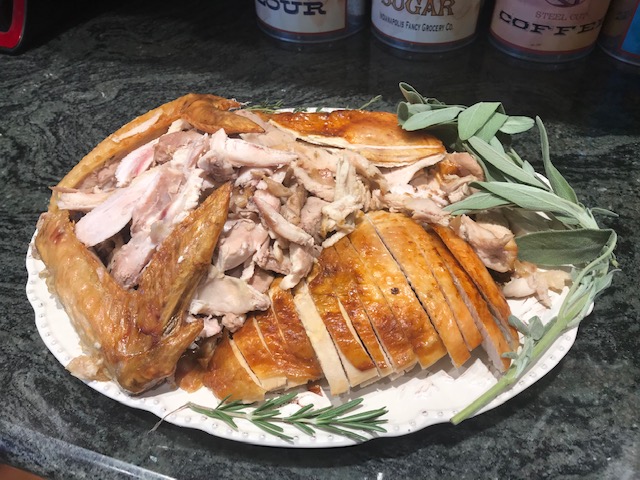 But, seriously, call your mom, anyway.