How Do You Downsize Fifty Years of Life?

One precious memory at a time, that's how. Speaking of precious...this lady right here... 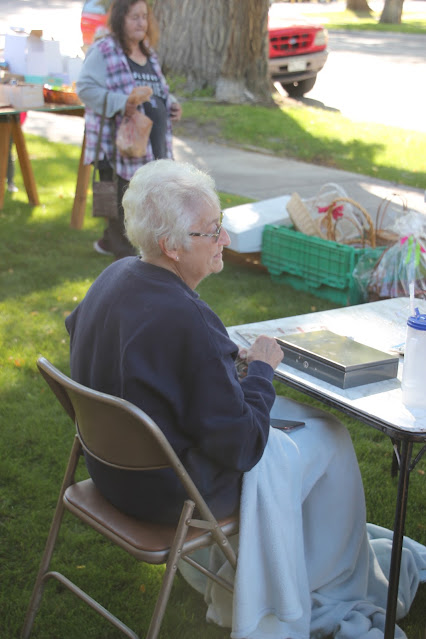 ...spent the better part of two days parting with her prized possessions and, to her credit, she shed not one single tear while doing it.
It was hard; she was asked to make decision after decision on the fly, with little to no time for mental debate. Items leftover from her childhood, gifts from family and friends who have since passed, things that she has used for decades; everything was up for grabs and she handled it with grace. I may have been slightly less than graceful in my own actions at the sale, so I was shamed by her graciousness.
It's not surprising, given her personality, that in addition to keeping an eagle eye on the cash box, she also held court with the many, many admirers who came to say good bye and to wish her well: old friends of hers, Stampede committee members who served with Dad, Dad's best friend of sixty-some years, Mom's besties aka: The Ladies Who Lunch, neighbors from decades ago, fellow Catholics who attended the same parish as her for all these years, even old classmates of mine and my sisters; the list goes on and on. 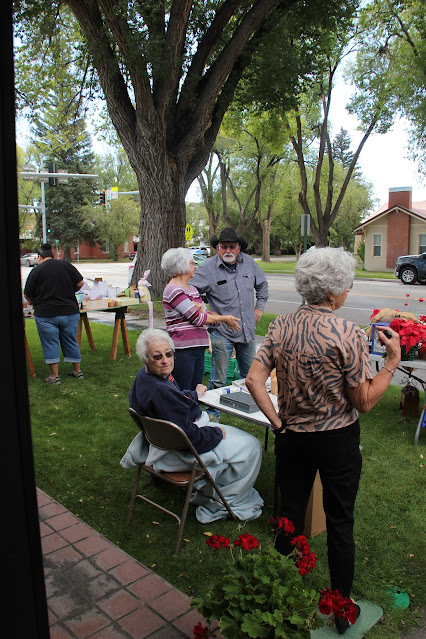 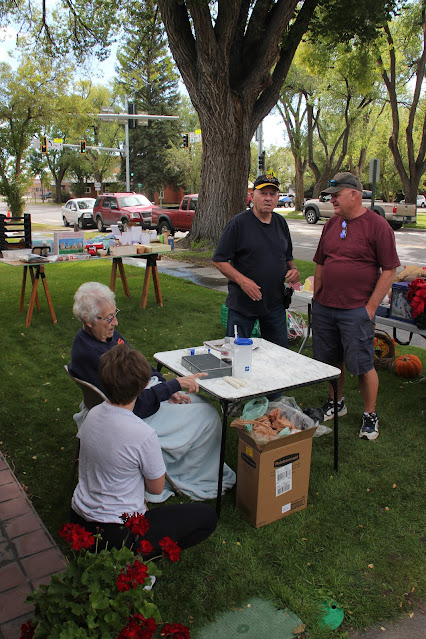 Of course, my sisters were also on hand for what we I now think of as The Purge. We all took turns manning the cash box, organizing the tables, rummaging through closets in search of more items to add to the sale, and reminiscing over certain items. 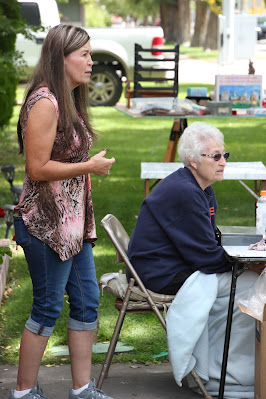 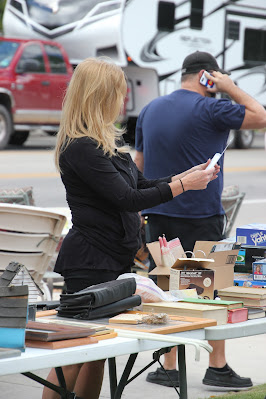 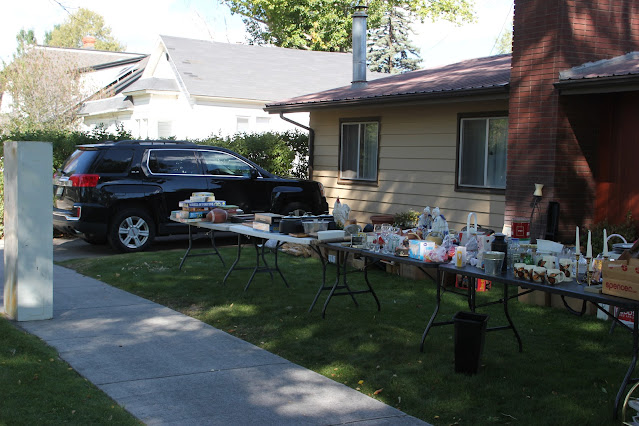 One such item was what we lovingly refer to as "The Mouse House". 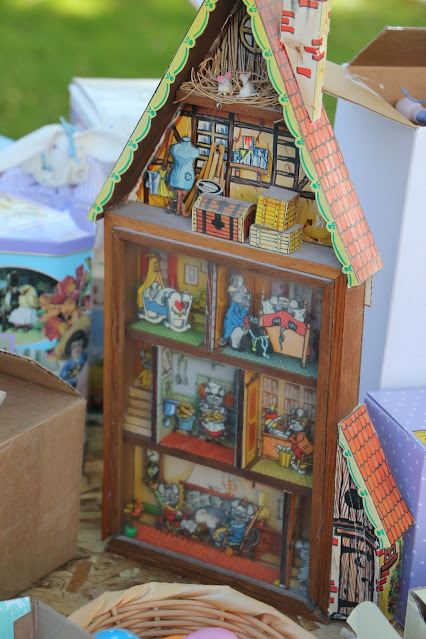 This shadowbox was made by my Aunt Debbie back in the 70's. It has hung on the wall in the laundry room forever, and, has provided the inspiration for hundreds of stories in my head. 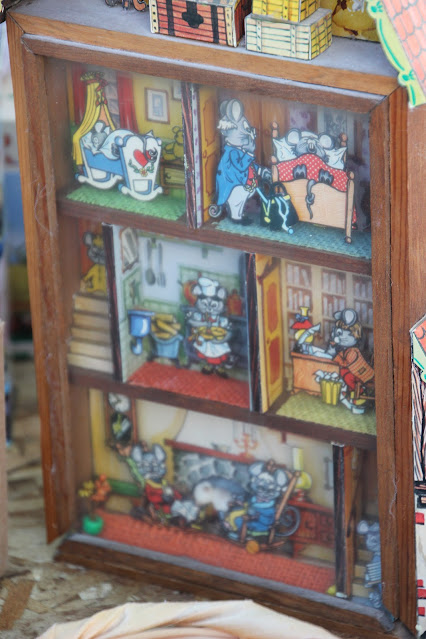 Each room of the house held characters that I naturally assigned to family members: Grandma and Grandpa rocked peacefully in chairs next to the fireplace... 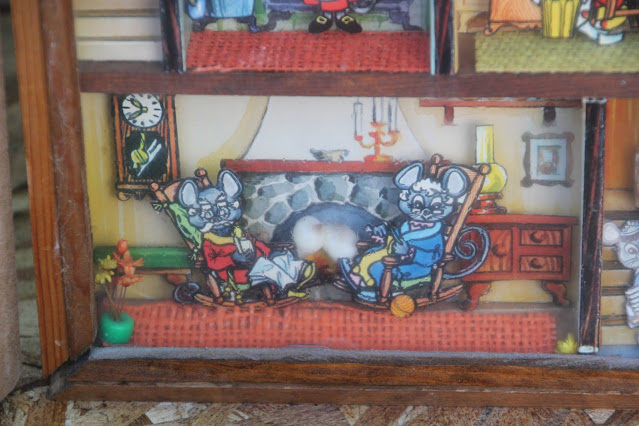 ...Dad toiled away in his office, Mom stirred a bowl of something delicious in the kitchen as I dragged a beloved teddy bear down the stairs... 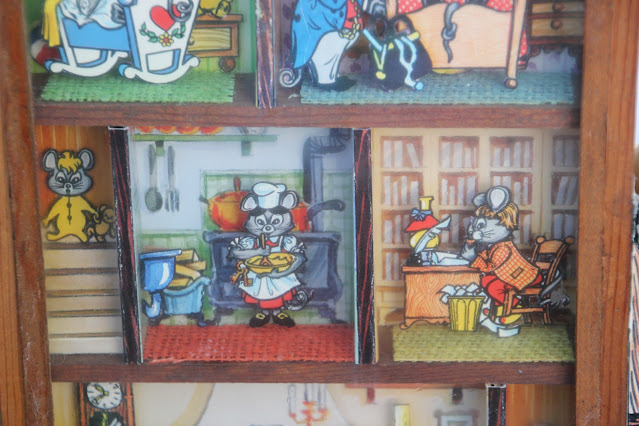 ...meanwhile, on the third floor, my older sister was faking an illness so she could play hooky from school and my younger sister was napping in her crib. 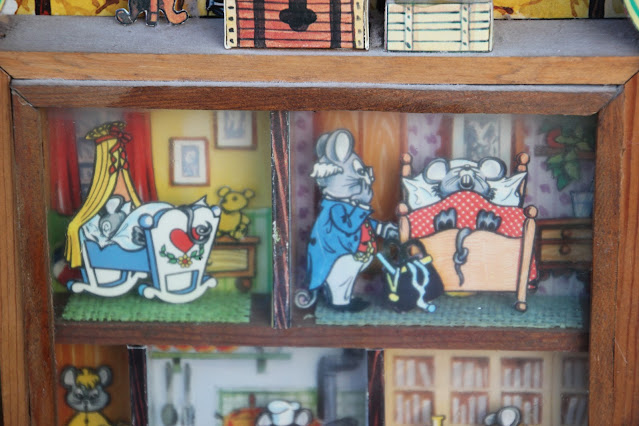 \
The attic was a mystery to me; we didn't have one, so, in my story, it was haunted. Naturally, my mental picture of the ghost was similar to that of the "ghost" that the Brady girls rigged up to scare the boys out of the attic as payback in that one episode... 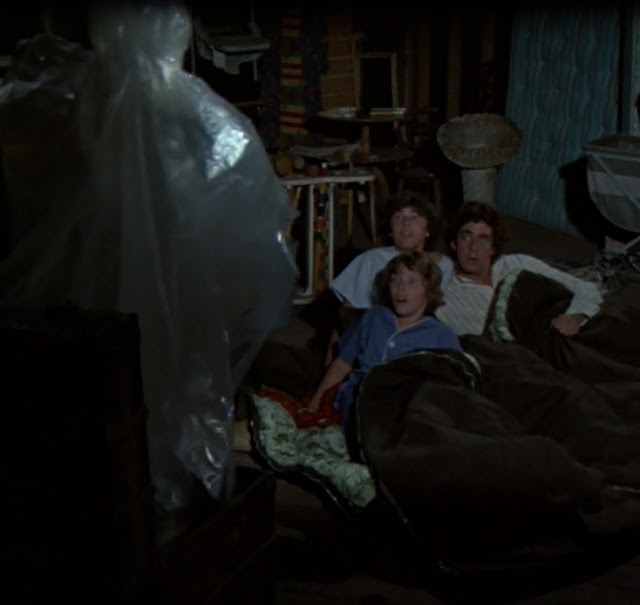 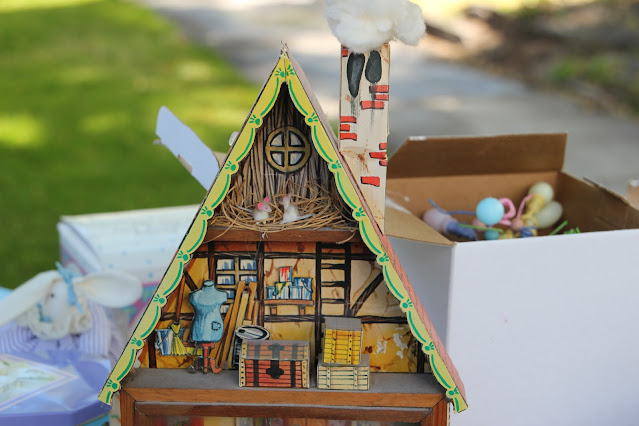 Anyhoodle, parting with the Mouse House was a tough call, but we did it. 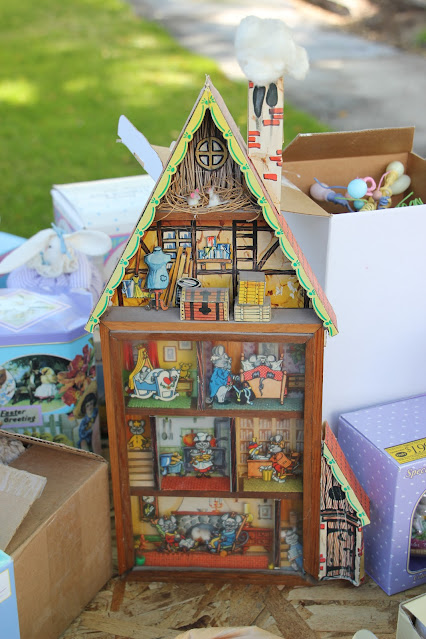 Mom had a similarly difficult time parting with this old elephant cookie jar. It originally belonged to my grandmother and dated back to, I'm guessing, the 1930's. 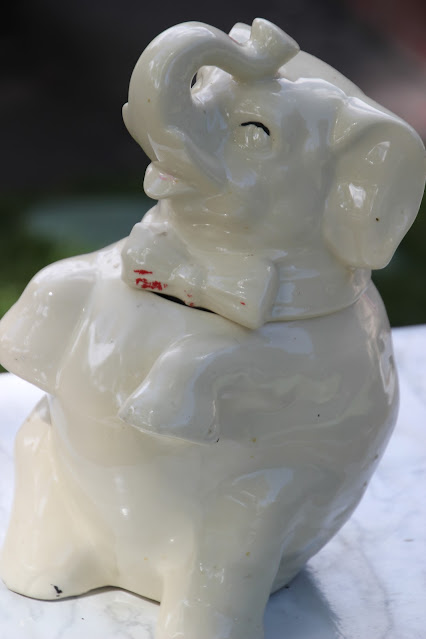 While being less difficult to part with, this hat from our old swim team did bring back some fond memories. 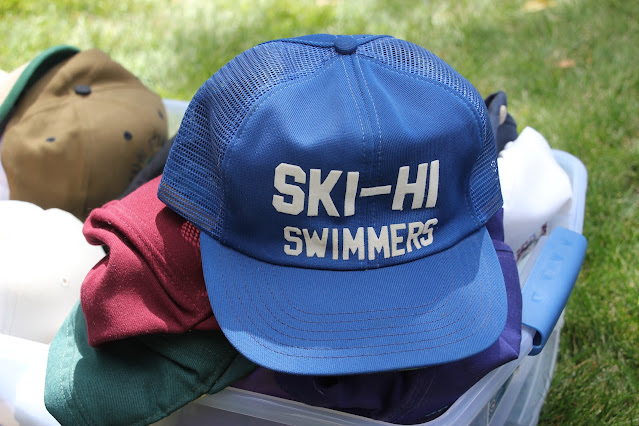 And this sombrero brought to mind one of the many politically incorrect Halloween costumes that my Mom dressed me in... 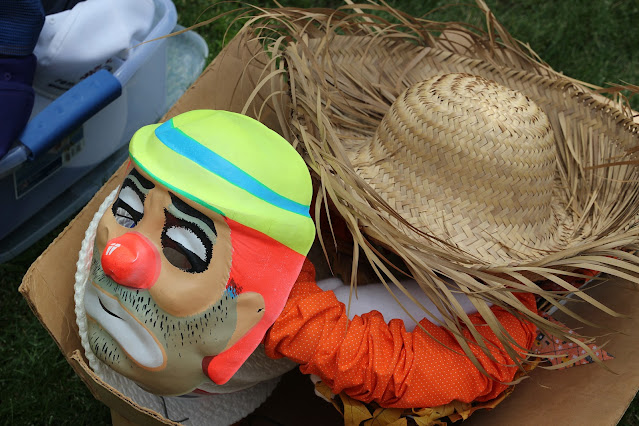 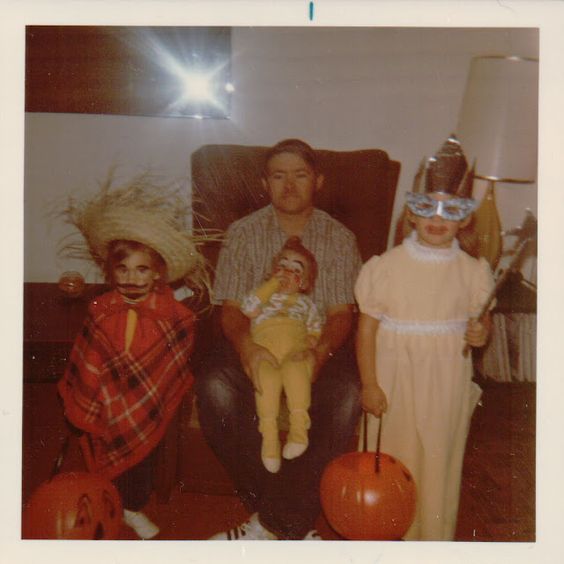 Cultural appropriation, anyone?
When we plugged my Dad's old 8 Track player in, we were heartbroken to discover that it  didn't work anymore; it went to the junkyard along with an ancient 8mm film projector that likewise failed to function. 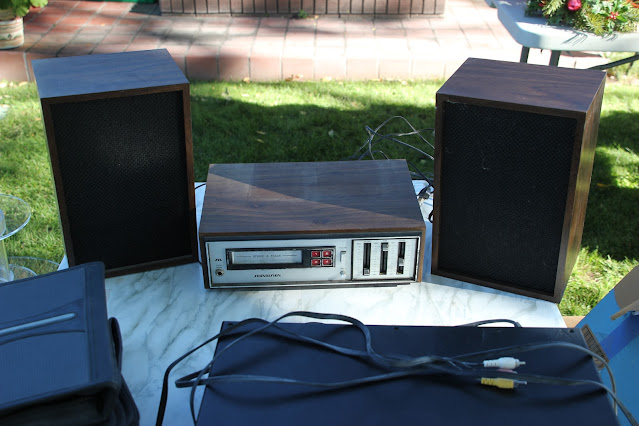 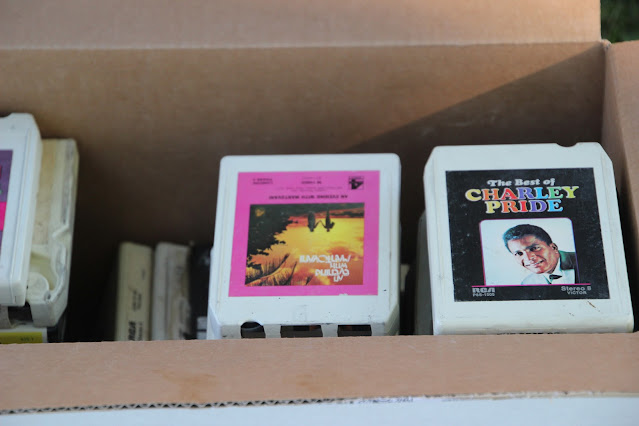 It should be noted that Hugh, the Man-Cub, and Shanti spent countless hours cleaning out the garage, where the Cub scored on rusty old tools and Shanti just considered it a win that no one ended end up with Tetanus. Yet. 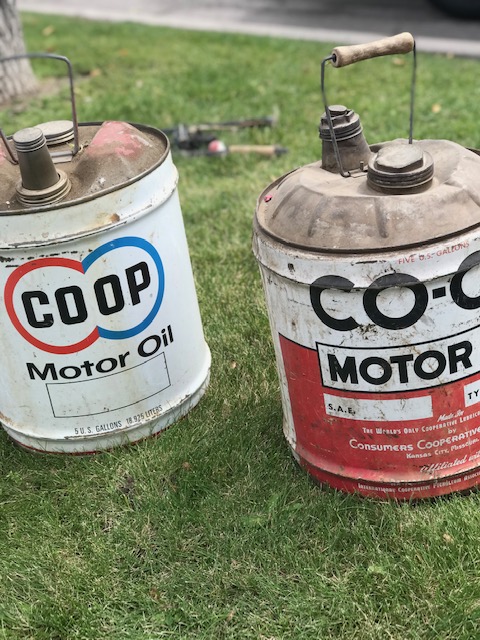 By the end of the weekend, we had managed to clear out the majority of the items that Mom had set aside for the sale, which, was quite the accomplishment when you consider how much stuff she and Dad had managed to squirrel away in the fifty-two years that they have owned the house. I have to imagine that Dad was really proud of Mom for being as strong as she was throughout the whole ordeal. Change is so hard. 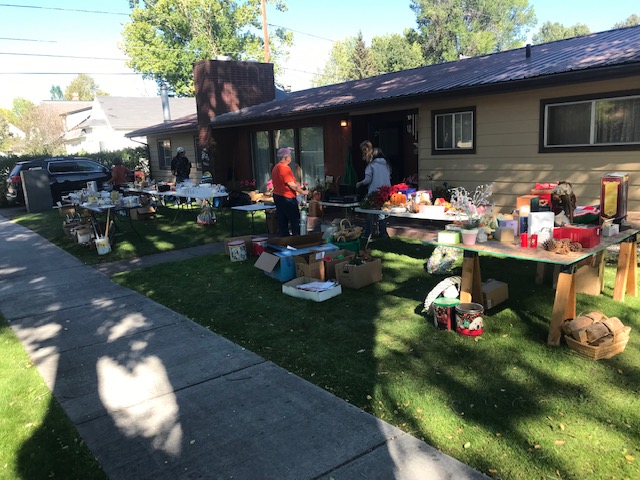 When all was said and done, we had a small pile of unsold items that we hauled to the curb and marked as "free". The pile was mostly gone by Sunday morning.
We packed up the majority of the items remaining in the house, with the exception of the dishes, appliances, etc., that Mom will be using. Next week, Hugh and I will drive back over to Mayberry to help Mom pack up those items and to supervise the moving company as they load the truck. Hugh has a meeting in Denver that he will leave for on Friday once the loading is done, then, I will drive Mom's car back to Petticoat Junction, where she will stay the night with me. Bright and early Saturday morning, we will meet the movers at the new house in Hooterville and the unpacking will commence.
It's all coming together.
Although I'm dreading the final sight of the house in my rearview mirror, I am excited for what the future will hold for Mom and I'm looking forward to having her closer to us.