The kids start school exactly one week from today. When they were younger and I worked at my old job, I kind of looked forward to the start of school, to the regularity of the schedule and to the predictability of the day but, now; not so much. We have just had such a nice summer and, with The Teenager being a Sophomore and the Man-Cub going into seventh grade, I kind of feel like life has been set to fast-forward and I don't like it.

In an effort to preserve as much of their childhood as possible, we spent the weekend engaged in a few time-honored activities guaranteed to bring out the kid in anyone; late night star-gazing from the atop a car parked in a field and a long day of fun on the lake.

Friday night, we poured a thermos of hot chocolate, bundled up in sweatshirts and ventured out to Jana's where the girls climbed atop the above-mentioned car and stretched out on a mattress that Jana had thoughtfully provided for them. The boys, being, well, boys, climbed to the top of a nearby out-building and watched the show from there while Jana and I (the menfolk were otherwise occupied and, to be honest, not exactly interested in staying up to all hours of the night watching shooting stars. Their loss) pulled out a couple of patio chairs, put our feet up, leaned back and enjoyed some lively discussion while watching the meteors, courtesy of the Perseid Meteor shower, streak across the night sky.

I found the night quite magical. The meteors were entertaining, the weather was surprisingly warm, making the layers of sweatshirts unnecessary, and; having the chance to listen to my children and their friends giggle together in the warm night air while spending time with my own dear friend was something that I won't forget anytime soon.

Of course, the late night did make getting up early to hit the lake the next day a bit of a challenge. But, you know, we are troopers. 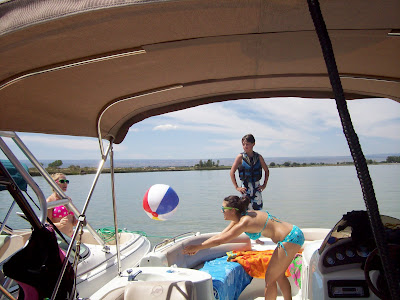 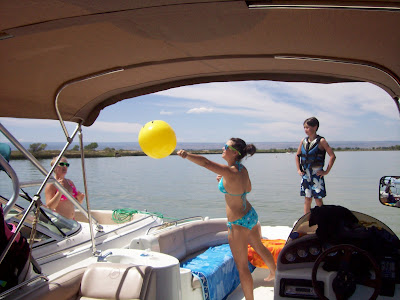 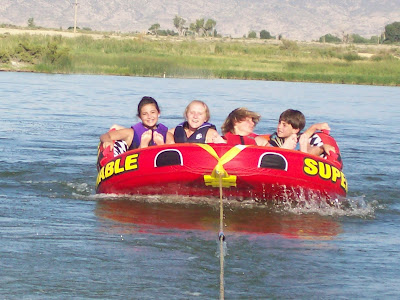 The rest of this week will be filled with other activities aimed at taking my mind off the fact that mah babies are going back to school next week. Tomorrow night, we are hosting a very special Porch Night, featuring movies on the porch and, I am really looking forward to finally using the video projector that Hugh bought me for Christmas.

And, speaking of movies, if all goes well, we will hit the drive-in this weekend for the last double-feature of the summer. Then, first thing Monday morning, I will be back in the kitchen, making the Man-Cub's box lunch, the first of several hundred that I will be required to make over the course of the school year.

I really prefer sandwiches eaten on the boat. Le sigh.
Posted by Chelle at 7:40 AM