Our shopping excursion to Neighboring City went better than I expected. Hugh and I managed to get most of the things that were on our list with an unexpected bonus.

While Hugh was perusing the merchandise in a jewelry store that he frequents, one of the cashiers asked him if he was interested in purchasing a teddy bear, proceeds of which go to support St. Jude's hospital. Because the search for a cure for childhood cancer holds a special place in our family's heart, Hugh told her that he would buy a case of teddy bears and that he would donate them to our local police department to give to children who are victims of domestic abuse. The cashier was then kind enough to throw in an additional case of bears for free; we came home with twenty-four plush teddy bears for needy children and a little more money will go toward ending childhood cancer. Win-win.

Oh, and without going into too much detail; Santa is no longer worried about the Man-Cub. As I said, it was a successful day.

Plus, it ended on a high note; I got what is probably the last picture that I will ever get of my children with Santa Claus, courtesy of the local fireman's Christmas party (Hugh is on the Board). 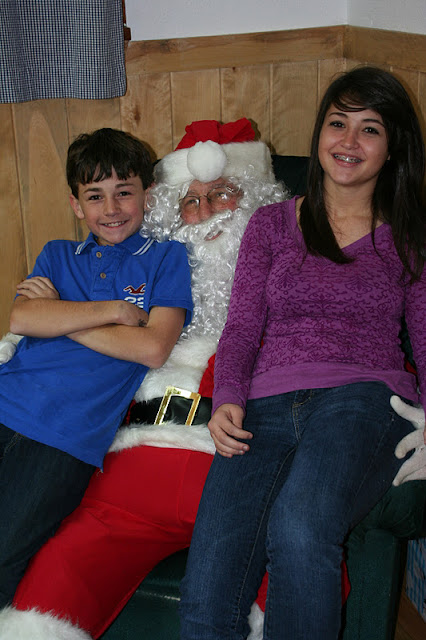 And, Grandpa Oscar, of course.

Now, on to today's recipe. 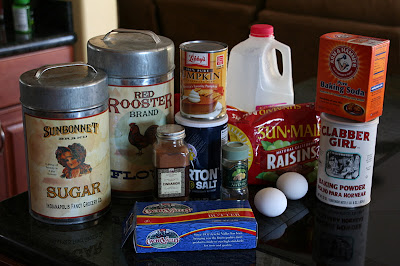 Preheat oven to 350 degrees. Grease loaf pan (or, pans if doubling recipe). Combine flour, baking powder, soda, salt, cinnamon and nutmeg. In a separate bowl, combine pumpkin, sugar, milk, and eggs, blending well. Mix in dry ingredients and butter, stirring until flour is moistened. Add raisins, if desired (I double the recipe and, at this point, divide into two bowls, adding raisins to one batch). Pour dough into prepared loaf pan(s) and bake for 65 minutes or until a toothpick inserted into center of loaf comes out clean. Cool in pan(s) on wire rack for ten minutes, remove from pan(s) and allow to cool completely. 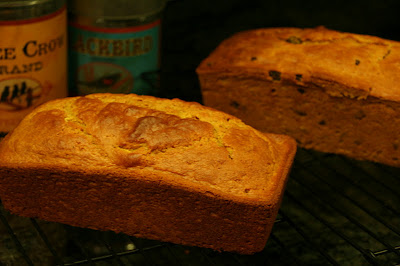