This recipe would be called Banana Nut bread if I didn't live with Hugh, the Nut Nazi. According to the Nut Nazi, nothing good ever came from adding nuts to baked goods. Nuts are perfectly fine when eaten separately from other food groups but, never the two shall meet. For the record, however, if you like nuts; go nuts.

Speaking of nuts, you know how some kids are super-allergic to nuts and, even the tiniest whiff of contact with a peanut can bring on dire symptoms? Yeah, I used to sort of scoff at that but, not anymore; not since episode two of unexplained swelling of one side of my face. This time, the swelling is on the right side, is far worse than the first go-around and has lasted longer; it started last night and, as I type this, I am on my second dose of Benadryl and there is still some minor puffiness of my lips and cheek. I have no idea what triggered the reaction so I have no idea how to avoid future episodes. At least the peanut kids know what to look out for.

Also, this whole thing is a huge karmic bitch-slap since, when I was younger, my mother had an allergic reaction to a medication and ended up looking like one of the characters from The Dark Crystal... 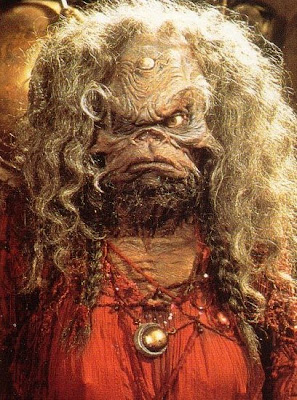 ...and I laughed at her.  Last night, despite being really concerned about my health and well-being (they claim), Hugh and The Teenager laughed at me because I resembled The Joker, as portrayed by the late Heath Ledger... 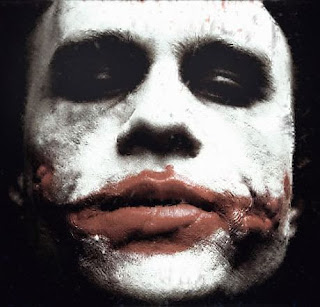 The fact that I let them live speaks volumes about my self control. Also, it is the holiday season and I was feeling generous. Swollen and freaked out but, generous.

And, now, to get that image out of your heads, let's move on to the banana bread, shall we? 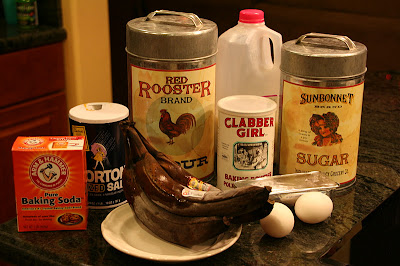 1 3/4 cup flour
2/3 cup sugar
2 tsp. baking powder
1/2 tsp. baking soda
1/4 tsp. salt
1 cup mashed ripe banana (yep, the black ones. I throw mine in the freezer when they get dark and spotty and save them for this recipe)
1/3 cup shortening
2 Tbsp. milk
2 eggs
1/4 cup chopped nuts (optional and assuming that you don't live with a Nut Nazi)

Preheat oven to 350 degrees. Generously grease loaf pan (or, pans, if you are doubling or tripling the recipe). In a large mixing bowl, combine 1 cup flour, sugar, baking powder, baking soda, and salt. Add banana, shortening, and milk. Beat with an electric mixer on low speed until blended then on high speed for 2 minutes. Add eggs and remaining flour, beat until blended.  If you are adding nuts, stir them in, now (Quick!While the Nut Nazi isn't looking!). Pour batter into greased loaf pan(s). Bake for 55-60 minutes. Cool in pan(s) for 10 minutes, remove from pan(s) and allow to cool completely. Loaves can be wrapped in plastic wrap and frozen. 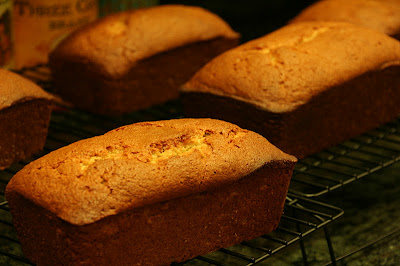