A number of years ago I received a set of cast iron sucker molds as a gift and I fell in love with the idea of making suckers for Christmas every year. For the first couple of years, I did just that. Then, we moved and I lost the molds in the vast expanse of storage boxes we kept in the garage, awaiting the day that we would remodel the new  house, allowing me kitchen space in which to bake and "candy-make" to my heart's content. When that day came (six years later), I lovingly unpacked the molds and relegated them to their very own space in the baking cupboard where; I forgot about them completely.

Until this year, that is.

Last night, I pulled the molds out and made a batch of cinnamon suckers. They turned out quite well and I'm considering making a batch of either cherry or sour apple suckers, tonight.

You know, in between packing my suitcase, supervising the Man-Cub's suitcase packing (can't end up at Grandma's house with nothing but a pair of shorts and a tank top, after all), packing the presents into the car, unpacking the presents from the car because not everything fits the first time (ever), repacking the presents into the car, and, celebrating Hugh's birthday with dinner at a local Mexican restaurant where the waiters will serenade him with the Spanish version of Happy Birthday to You while he wears a giant sombrero (paybacks from my birthday last month).

Yeah, those suckers aren't going to get made. The best I can do is to store the molds in a more visible location for next year. In the meantime, however, I do have cinnamon suckers to enjoy on the long ride to Mayberry and that's ok with me. 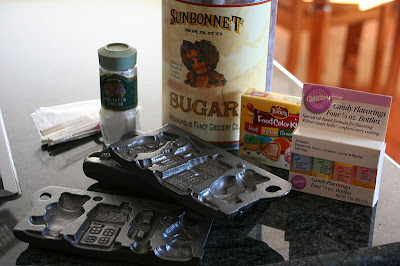 In a heavy saucepan over low heat, slowly dissolve sugar and cream of tartar in water, stirring constantly. When sugar is dissolved, increase heat and cook syrup until it reaches 310 degrees on the candy thermometer (about 25 minutes total cooking time). Add candy flavoring and food coloring and pour slowly and carefully into sucker molds. Allow to set for approximately two minutes, remove from molds (be sure to follow directions on your specific molds, especially if they differ from my molds or from my directions). 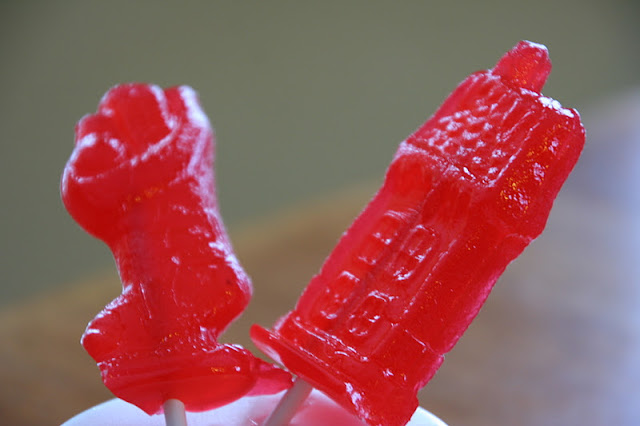 ﻿
Also ok with me? Getting to enjoy two of my favorite things....﻿ 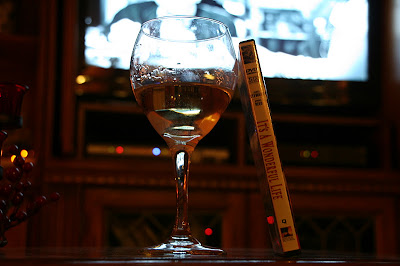