And the Tree is Still Standing

We got home from Mayberry yesterday and, despite my worst fears, Finnigan had failed to destroy the Christmas tree. Oh, I'm sure he tried to destroy it but, he was unsuccessful. Best. Present. Ever.

Ok, maybe not the best present, but, a nice surprise.

In addition to not trashing the house in our absence (although, he did manage to pull off his own collar, which apparently presented a challenge, if the teeth marks gnawed into the plastic latch are any indication), Finnigan earned my everlasting love by leaping into my arms and kissing every inch of my face, protesting mightily when I attempted to put him down. He also slept curled up under my chin for most of the night and I'm pretty sure he didn't stop purring, once.

That thing they say about absence making the heart grow fonder? Apparently holds true for cats, as well.

So, yes, we are home again. We had a wonderful time at my parent's house; spending time with my sisters and their families. It was a fabulous holiday despite the frigid temperatures, my parent's refrigerator suddenly deciding to leak all over the kitchen floor, and cars that refused to start when it was time to go home (Ok, one car. Ours, of course).

The kids really enjoyed spending time with their cousins, opening the pajamas that have become a tradition on Christmas Eve, dancing to Just Dance on the Wii, battling each other in other video games and, of course, anticipating the arrival of Santa... 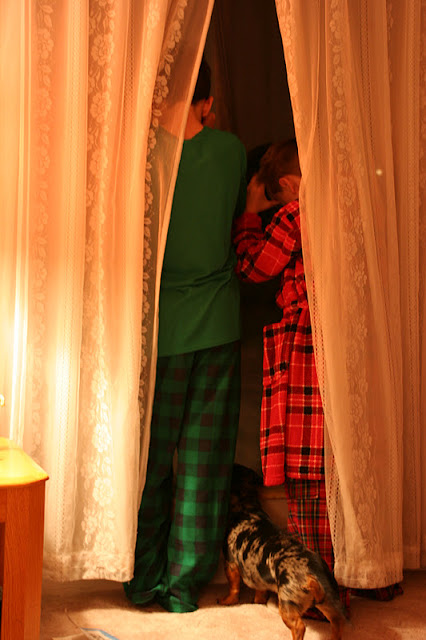 Of course, now we are back to the daily grind, which, in my case, includes making preparations for our New Year's Eve get-together with friends. The good news is, I don't have to worry about decorations because, as I mentioned earlier, my tree is still standing.

It's clearly the little things that make me happy.
Posted by Chelle at 8:37 AM