Coffee on the Porch

Yesterday, I spent part of the morning on the porch, drinking my coffee and trying to catch a photo of the hummingbirds that regularly visit the feeders. I was unsuccessful in that endeavor, but, I still enjoyed my morning.

We haven't used the porch quite as much this summer as I am used to and that makes me sad. Granted, we used it quite a bit more in the spring, with The Teenager's graduation parties and whatnot, but, our summer usage has definitely suffered.

I'm going to change that just as soon as I get back from Mayberry. I'm thinking The Teenager needs a Bon Voyage Porch Night prior to her packing up and leaving for college. I think I will do it Old School style, with just Jana and Co., a few of The Teenager's friends, and us. It will be just as fun with a smaller, more intimate group, and, I think The Teenager will appreciate it more.

So, planning for that can be taking place in my head while I relax in the bosom of my family in Mayberry this week (What? Did I not mention that the Man-Cub and I are leaving for Mayberry tomorrow to spend the remainder of the week indulging in a spoiling by the Pod People? No? Well, we are!).

In the meantime, here are a few pictures that I took yesterday while awaiting the elusive hummingbirds. Because it just isn't summer without some totally gratuitous photos of the porch. 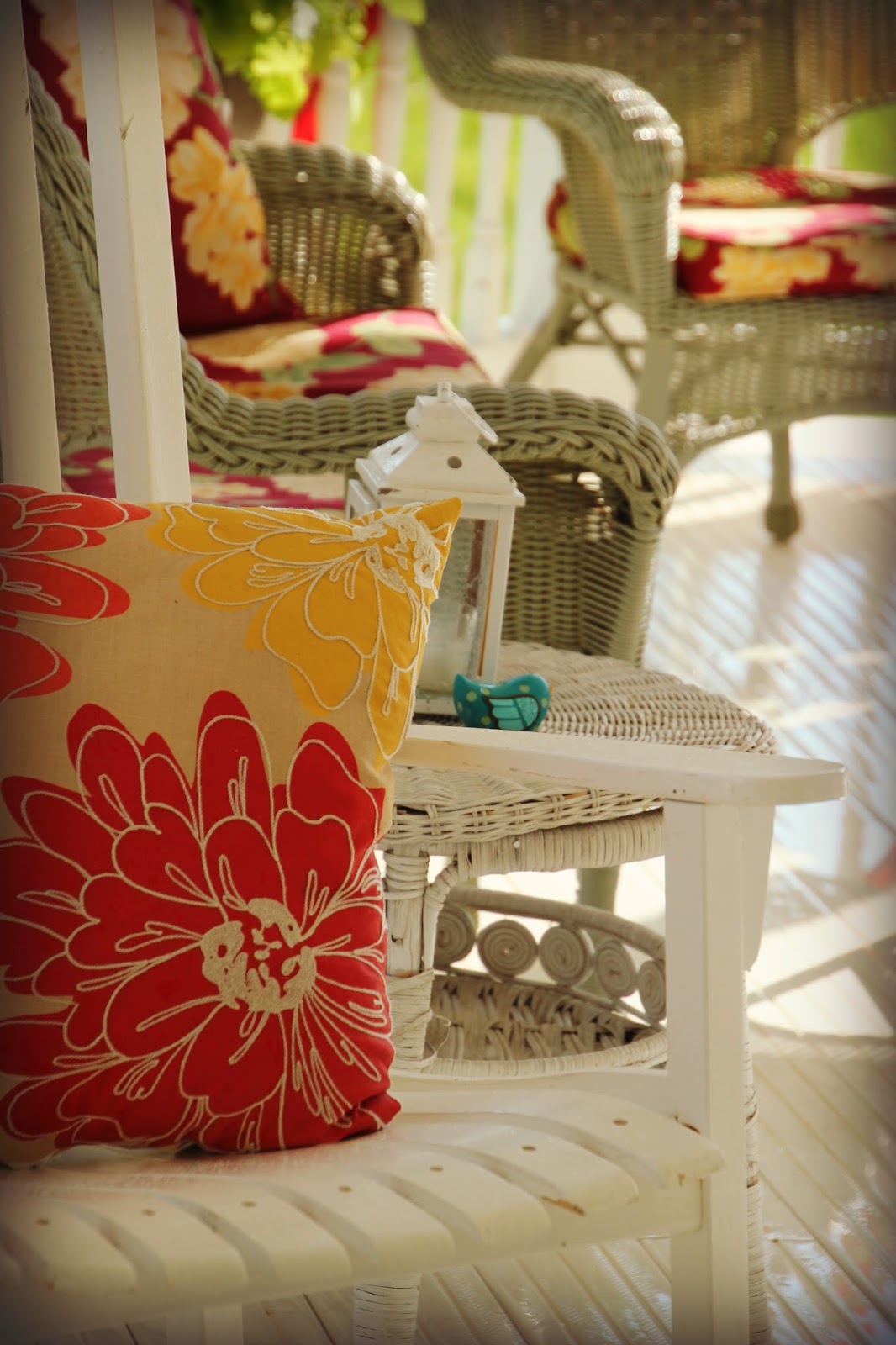 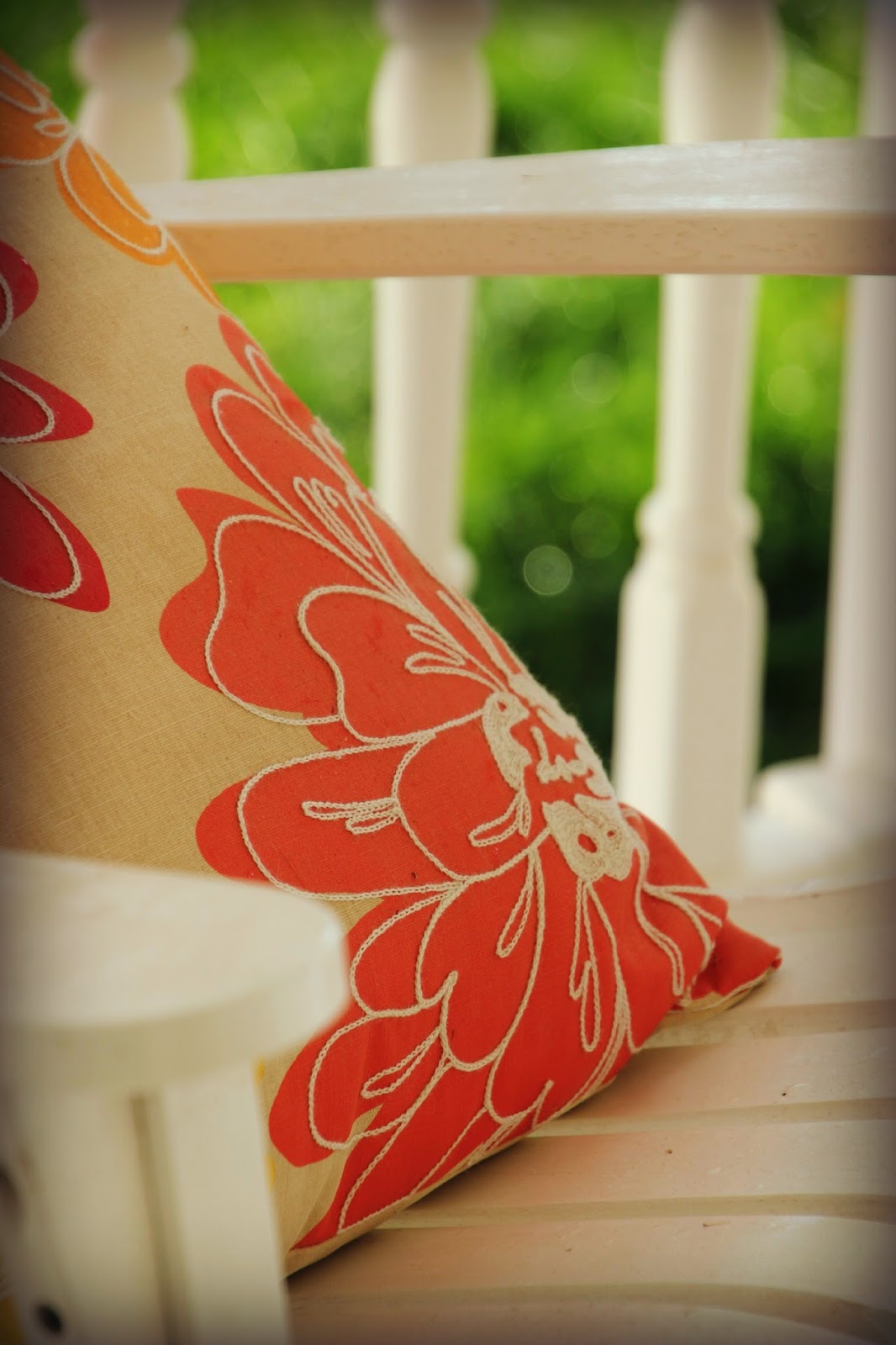 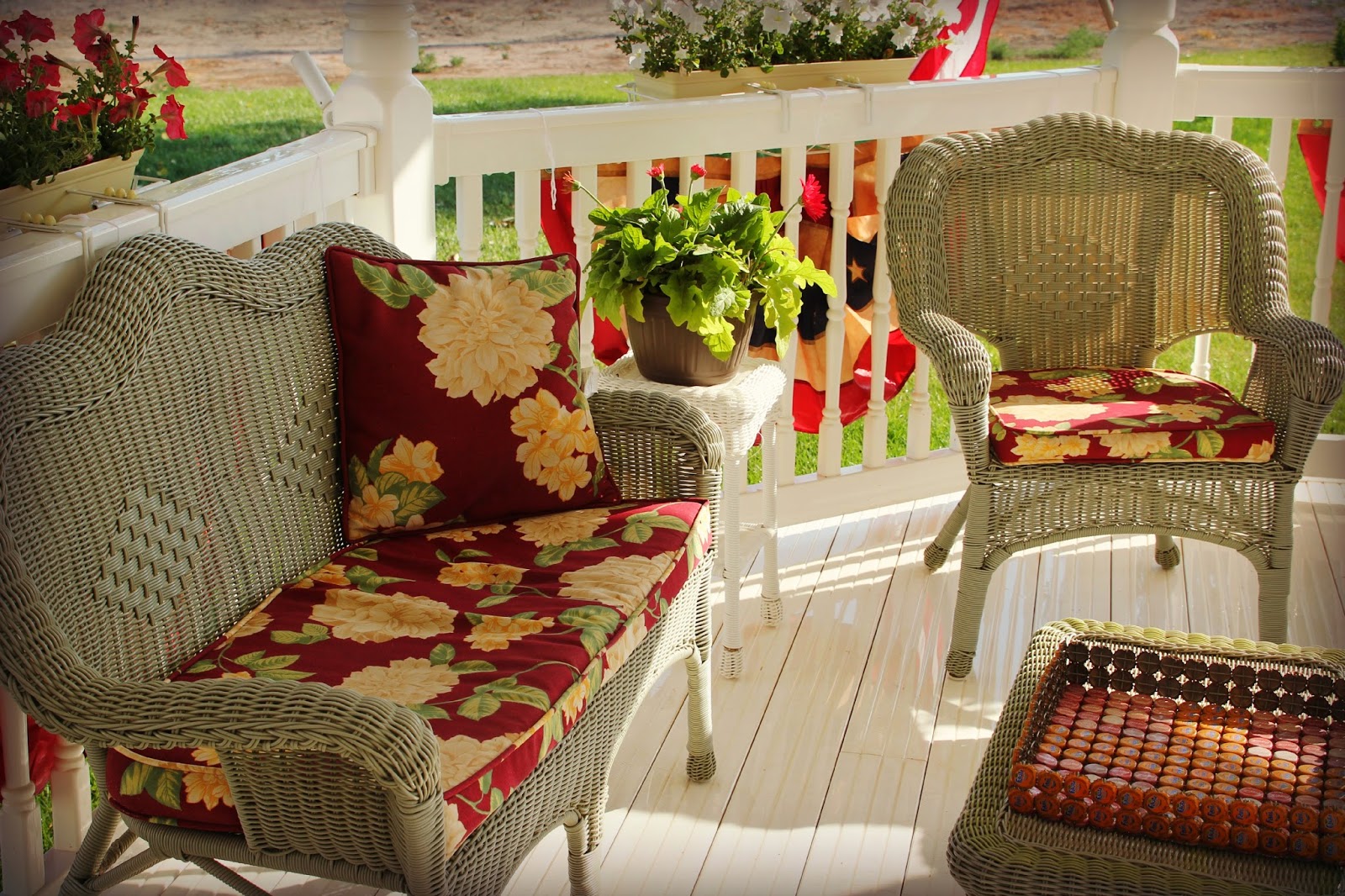 The color scheme for the porch this year is red and white, with touches of yellow and orange. I chose those colors because they are the predominate colors in the bottle-cap tray that Jana brought me back from Africa a couple of summers ago. The tray is useful and unique and I always get tons of comments about it when we have people over.

When I saw the red, orange and yellow flowered pillows on clearance at the Hellmouth, I couldn't resist; they aren't meant for outdoor use but are holding up really well, so far. 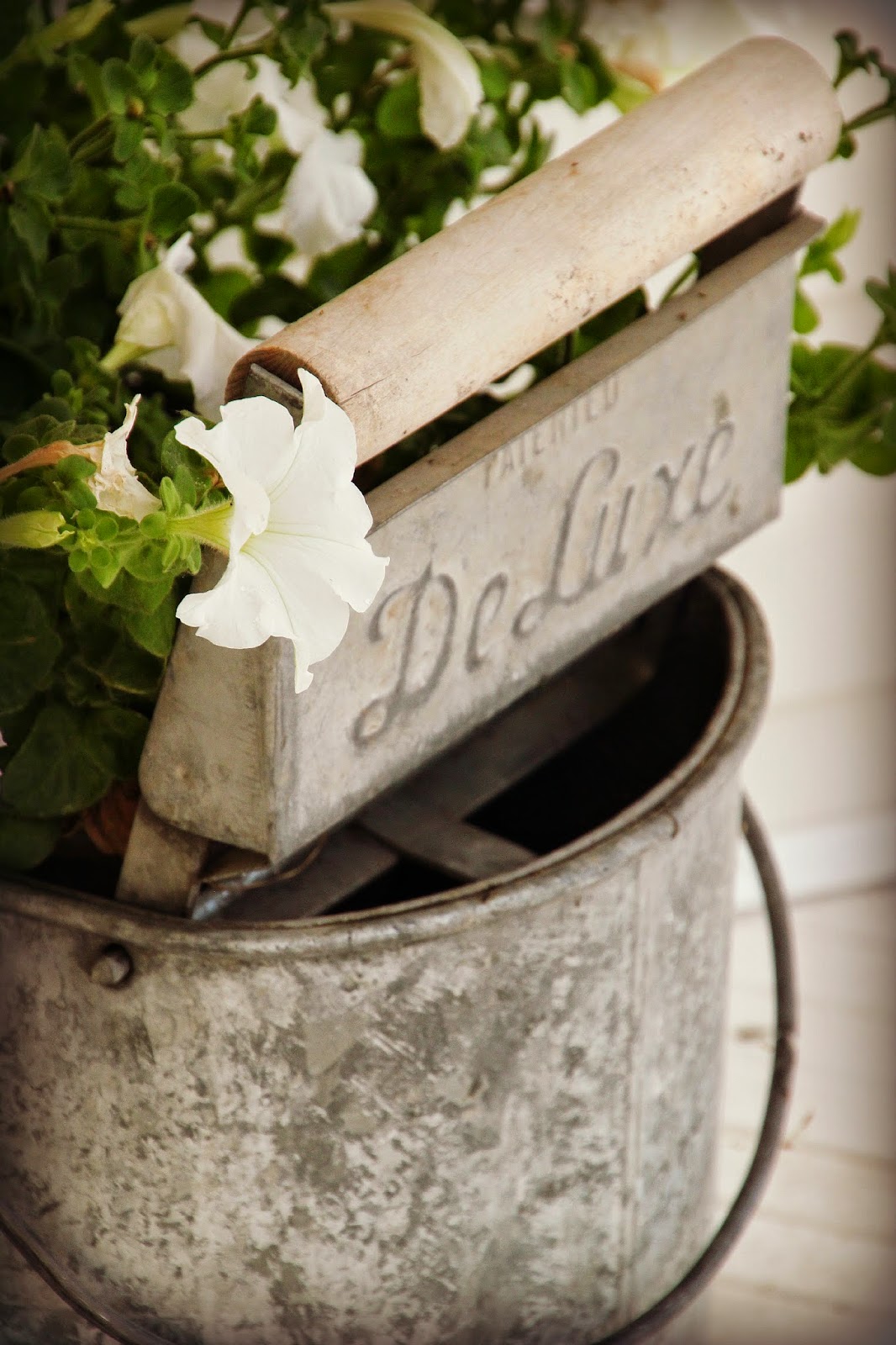 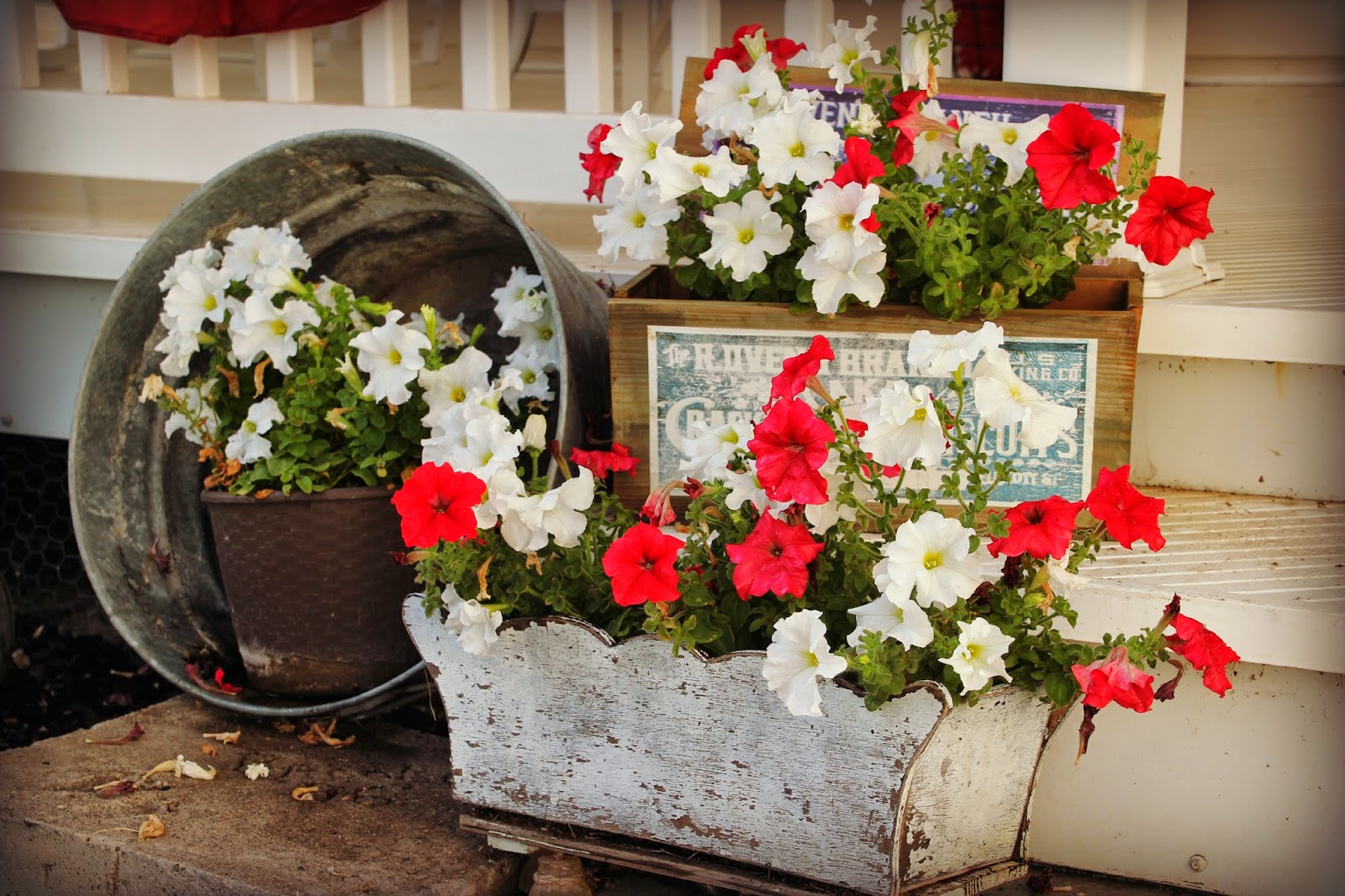 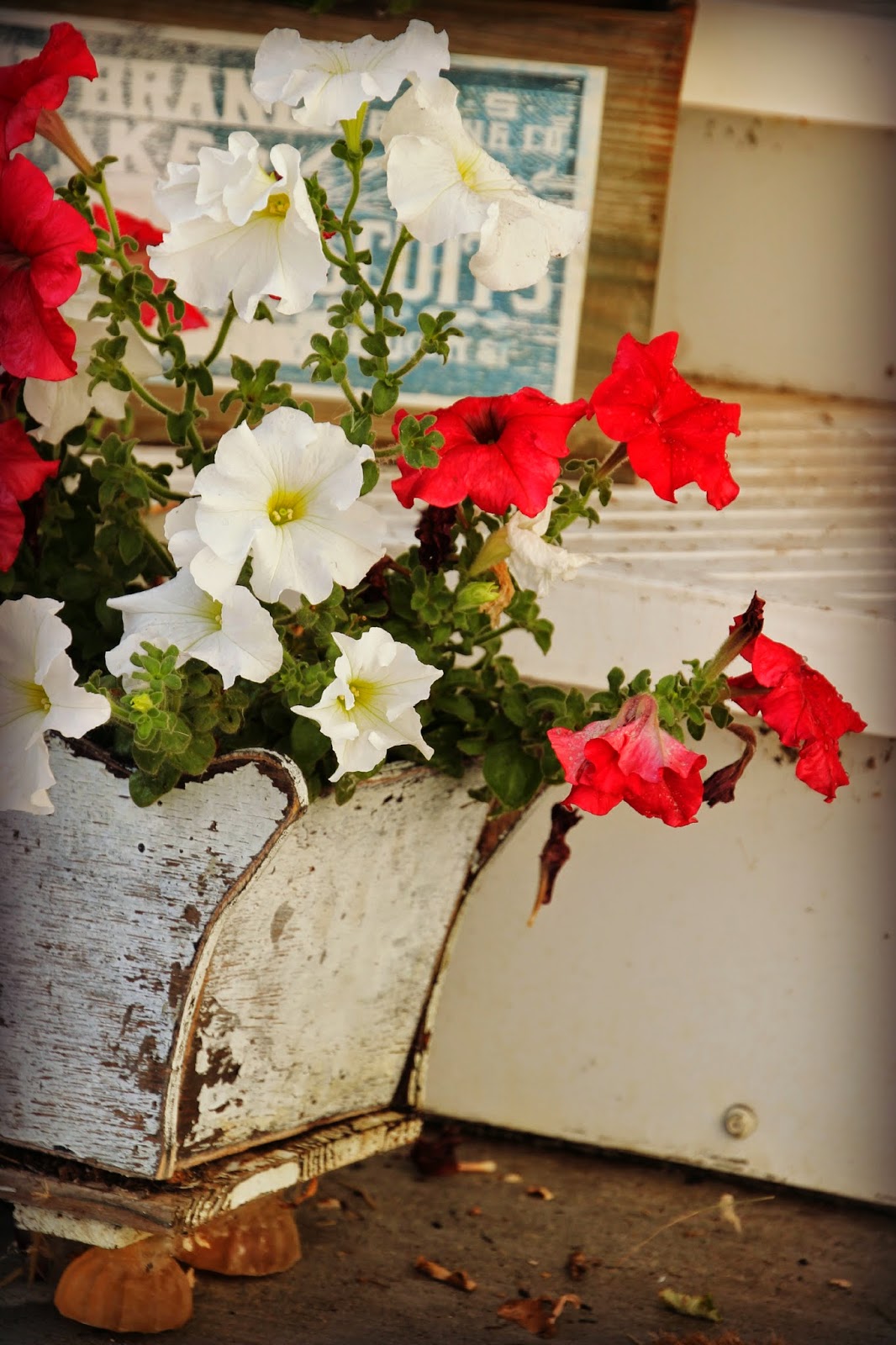 I planted this year's flowers in whatever containers I had on hand. Unfortunately, this is probably the last year for the vintage themed wooden crates and window boxes, as they are becoming quite beaten down by age and the weather. With that in mind, I have been on the lookout for more galvanized steel containers to stockpile for next year's flowers. I loved the vintage mop bucket that I found last summer and would love to find some something similar; maybe in Mayberry when my mother and I go antiquing (Hi Mom! Did I not mention that we are going antiquing? No? Well, we are!).

The red, orange, and yellow color palette will transition nicely when it's time to decorate for fall, which, as we all know, happens practically the minute I return from Mayberry. But, we can think about that later, which, as we also know, is how I roll. 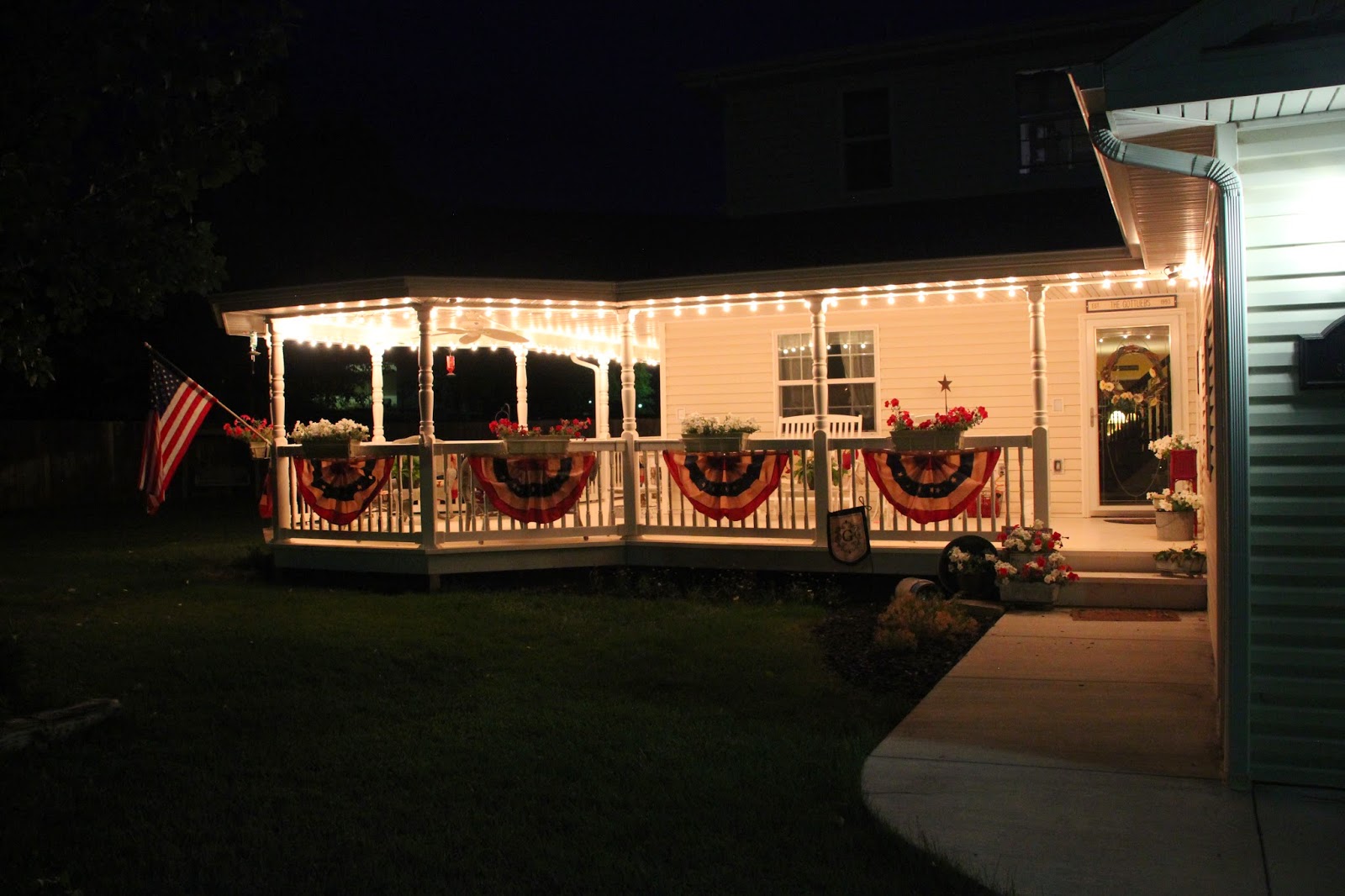