One year ago, today, we brought Boomerang home.

As predicted, I am most often responsible for his care and feeding. Oh, he goes to the hardware store with Hugh several days a week, and, if you ask him, Hugh would say that we split the dog-raising responsibilities 50/50, but, even he would tell you that Boomer is still 100% my dog.

I've never had a dog that was so completely devoted to me, or, one that so clearly preferred me to Hugh or to the children. Canine Trooper was all Hugh's, no doubt about it; Rowdie Dog was utterly devoted to the kids, particularly the Man-Cub. But, Boomer Dog? Well, he's obviously more connected to females, and, when Queen B is around, he thinks she's just about the greatest thing in the world. Next to me, that is.

Booms has remained true to his name; he still faithfully returns each and every object thrown for him, and, when without a ball, stick, or toy; he will retrieve whatever he can find, including small logs, plastic bottles, and the newspaper that is constantly littering our driveway despite the fact that we don't have a subscription.

Boomer is extremely protective of me, which has made me feel a lot safer on our walks to the park as well as on dark evenings when I am leaving the hardware store with a full deposit bag. His protectiveness carries over into the household, and, God help Hugh if he raises his voice in my presence when Booms is in the vicinity, which, Booms is always within my vicinity-he literally has to have an eye on me at all times, following me from room to room, and, adorably, from side to side as I work at the kitchen island. He is appalled by the fact that he's not actually allowed in the kitchen, where I spend so much of my time, but, as long as he can see me, he's content to wait behind the invisible threshold between kitchen and living room.

The only household rule that he completely ignores is the one about not being on the carpet in the living room; instead, he has taken up a spot next to the couch, as close to my seat as he can possibly get.

We still have no idea what his story was prior to coming to us, but, we know that his story will end with us; we love him like a child. And, for a woman who didn't want another dog, that's a pretty strong statement. 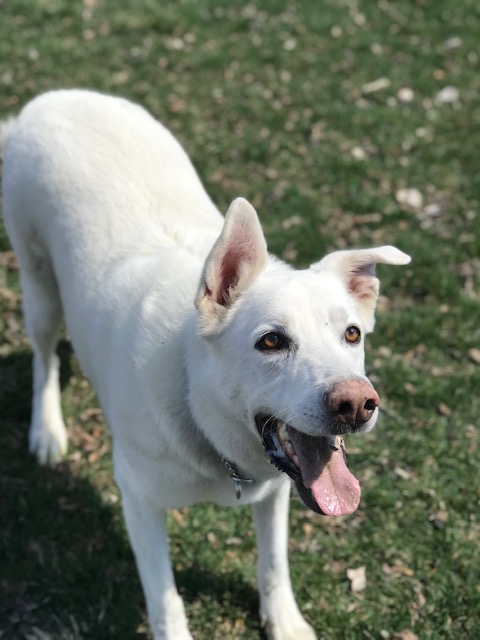