Saturday morning, we packed up our possessions, cleaned out the fridge, took out the trash, and wished Kulakane a fond farewell. It is my absolute hope that we will return again one day; that condo was seriously perfect for us.

Since we still had a full day to kill before our scheduled departures (6:50 pm for the Man-Cub and 7:20 pm for us), we decided to return to Paia, to see what we had missed in our rush to get on the road to Hana earlier in the week, but, first; we swung by the airport, taking the opportunity to check our luggage so that we wouldn't have to worry about storing it in the rental car while we explored.

When we got to Paia, we separated; the girls to the beach, and Hugh, the Cub, and I to town, to check out the shops, scoping for a lunch spot on our way.

The town, while busy that Saturday, still appeared to be very low-key and laid back, with a surfer-boy-slash-hippie vibe. In fact, there was a surfing competition being held nearby at Ho'okipa, so, we were treated to a lot of surf lingo being thrown around by tanned young men with surfboards strapped to the back of their jeeps; it was bitchin', brah!

The walk down the main street also provided me with lots of opportunities to take pictures. 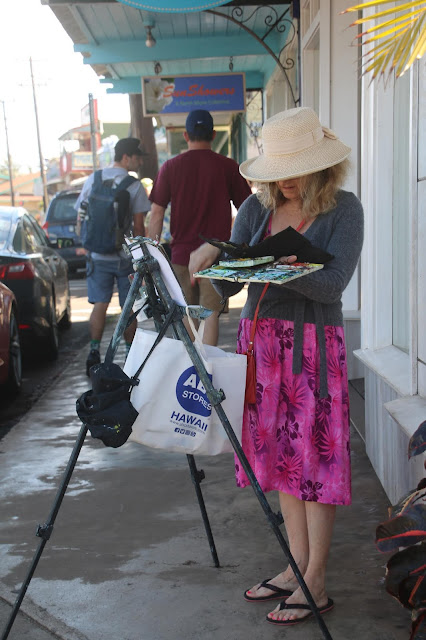 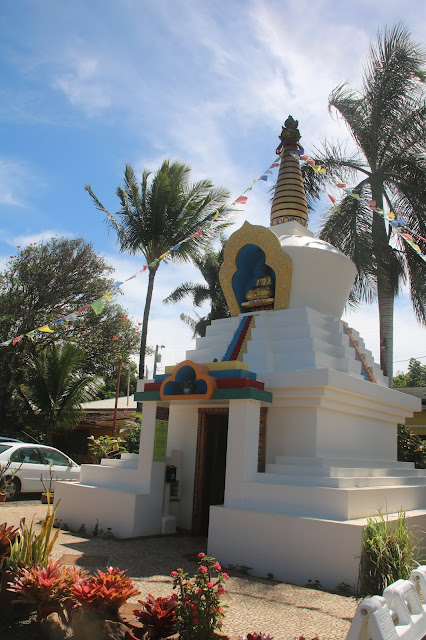 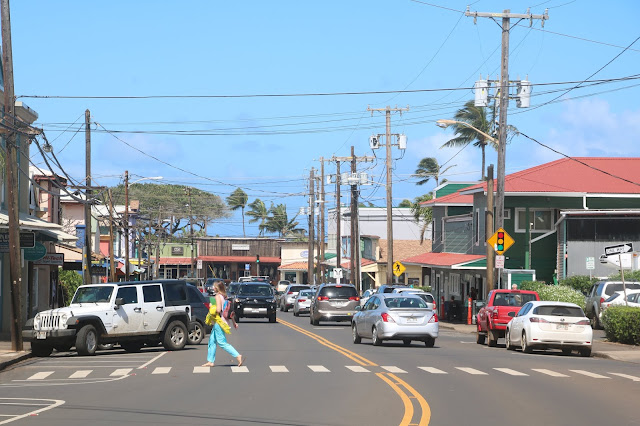 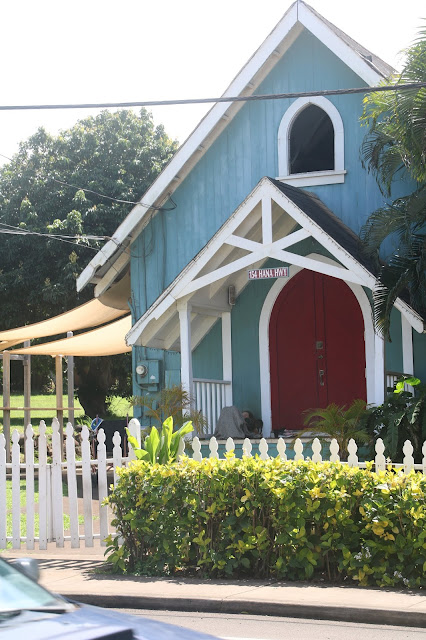 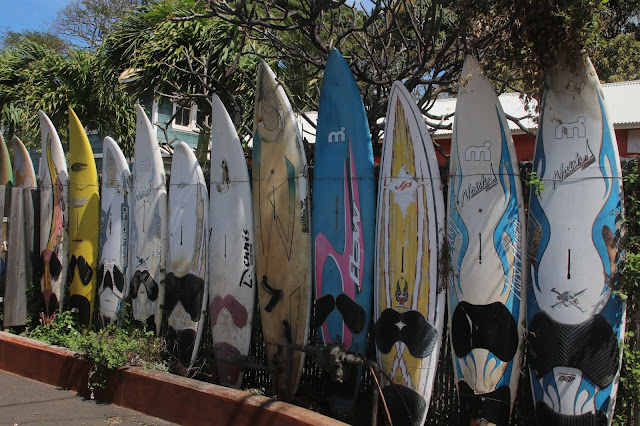 There are a ton of murals painted on walls and fences in Paia; which I found especially cool. 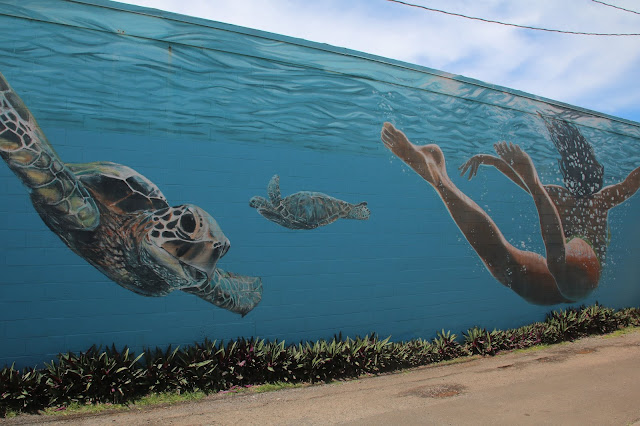 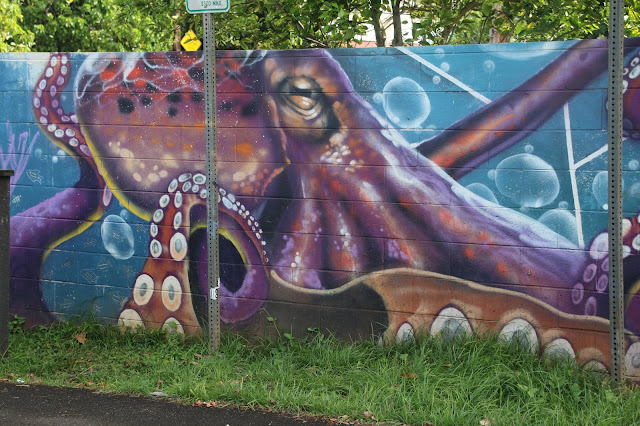 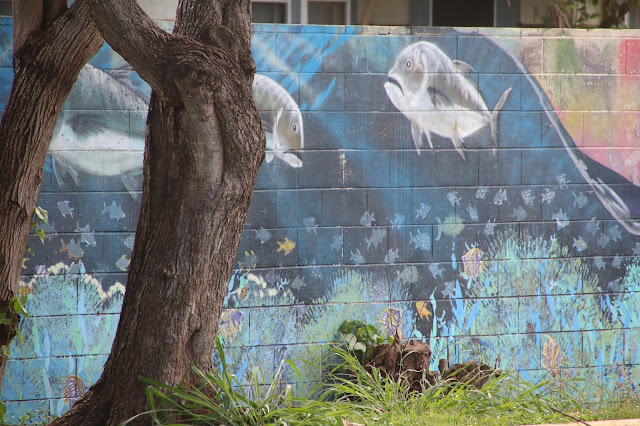 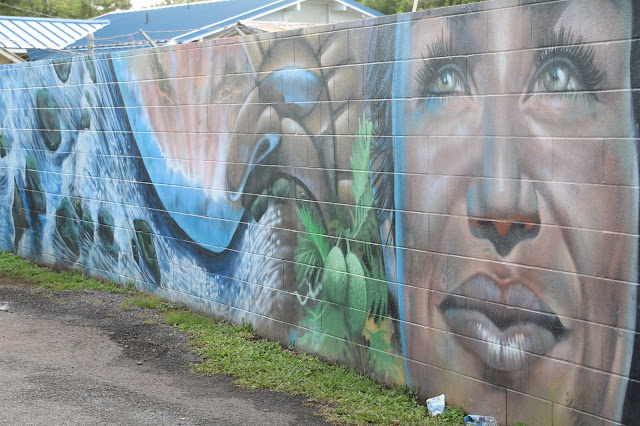 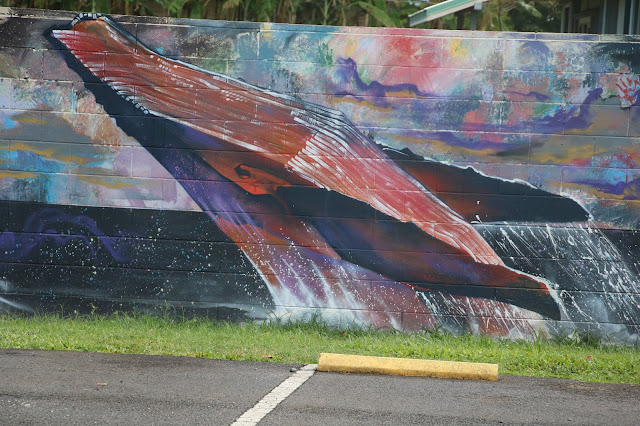 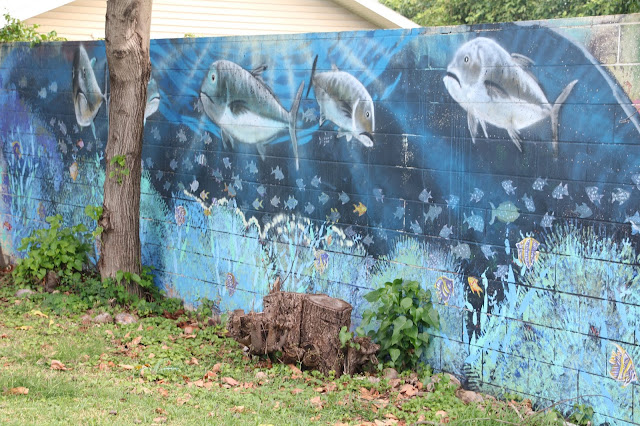 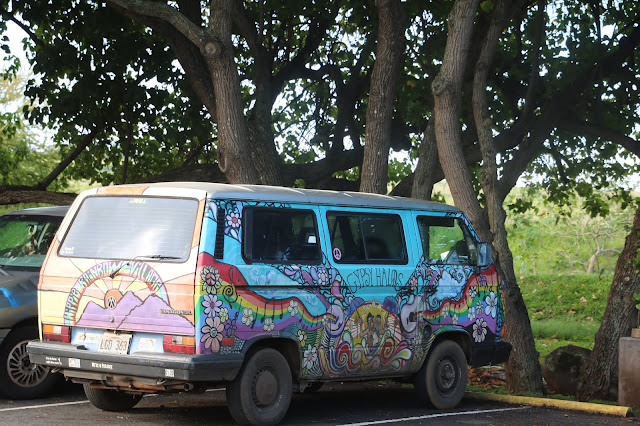 Apparently, they'll even paint your van in Paia, if it sits around long enough...

The hippie vibe of the town carries over to the beaches, as we learned once we made our way there to meet up with the girls, who, wasted no time in telling us that they had accidentally stumbled onto the clothing optional section of the beach; they were duly scandalized by the sight. They also told us that the prettiest part of the beach, and-the part that was currently providing a resting place for several sea turtles-was on the other side of the nude section.

So, what did we do? What any reasonable person would do; we walked down the nude beach, so that we could see the damn turtles.

And, not gonna lie; there was a generous amount of male genitalia, flapping in the breeze, and, a quick glimpse of something that has forever ruined my relationship with downward dog, but, it was worth it; that section of the beach was the prettiest section, and, the turtles were awesome.

And, since you couldn't help but see them, I did take a picture of one of the little peckers on the beach... 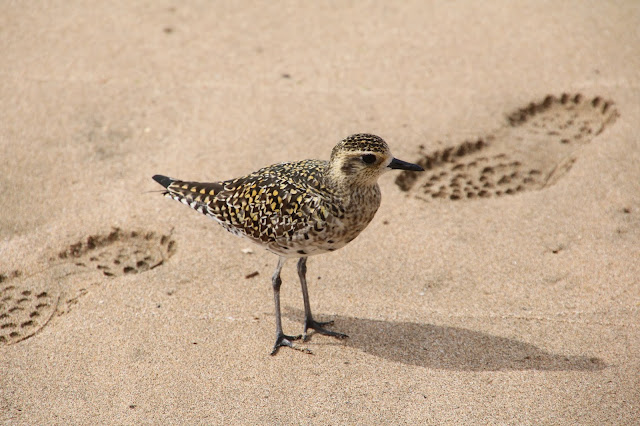 Wait, what did you think I was talking about? 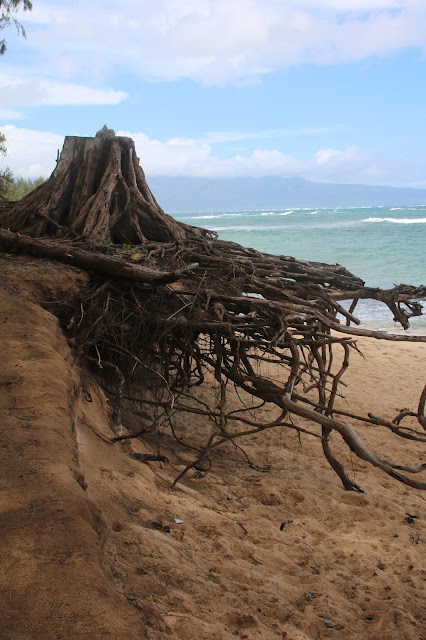 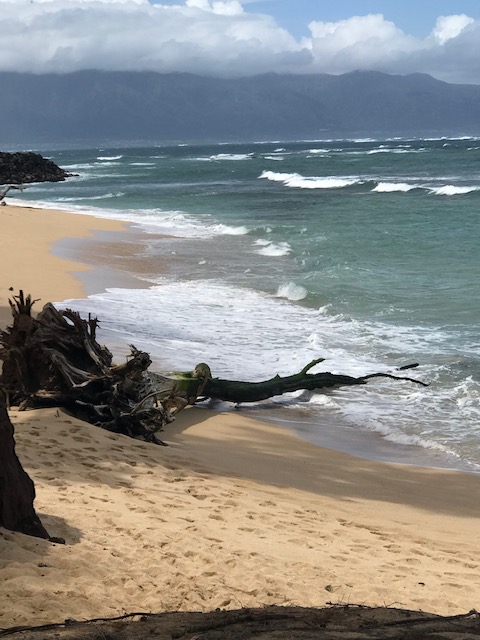 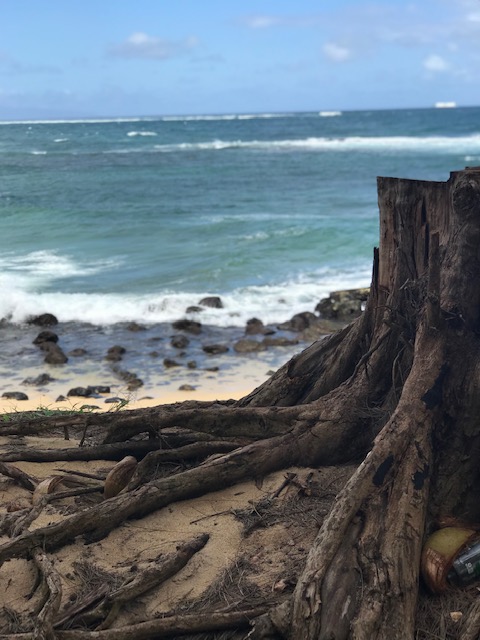 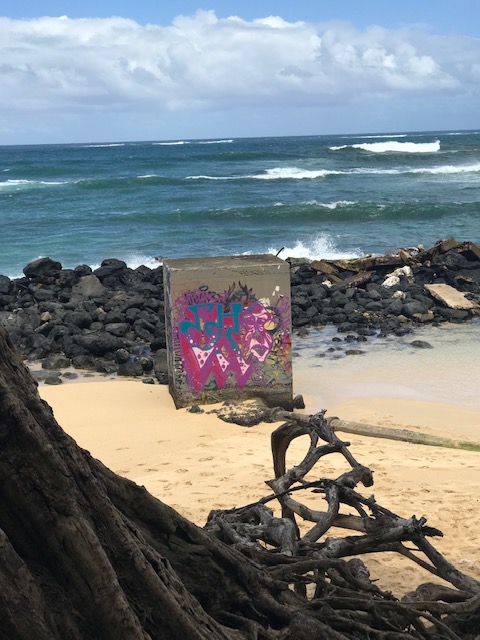 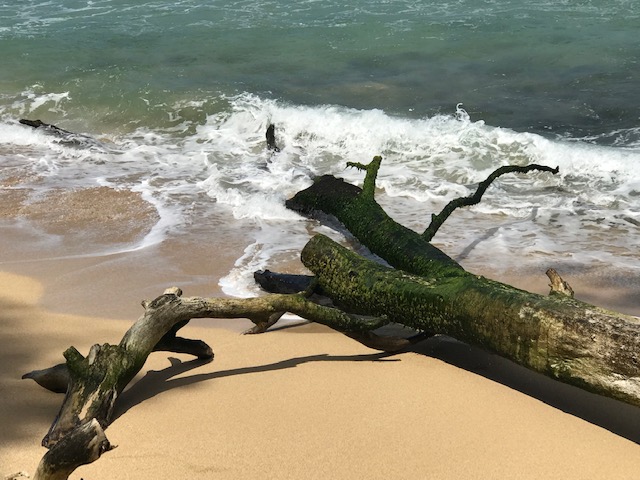 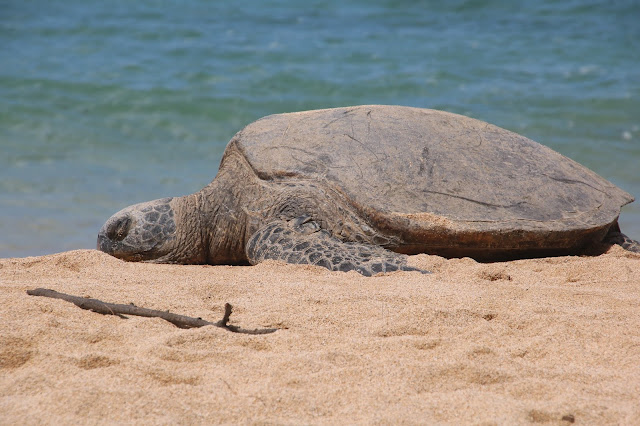 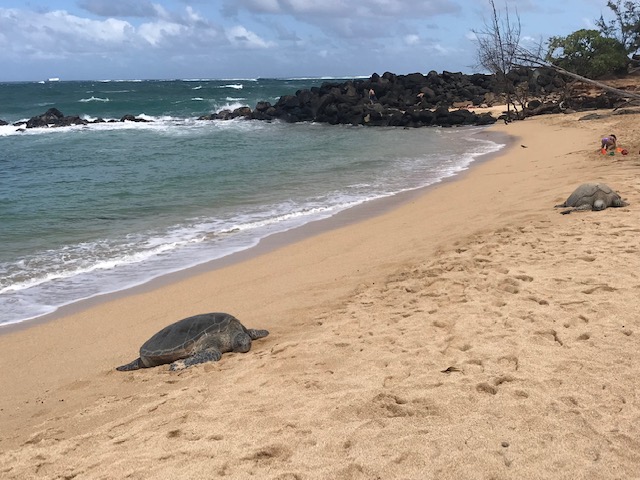 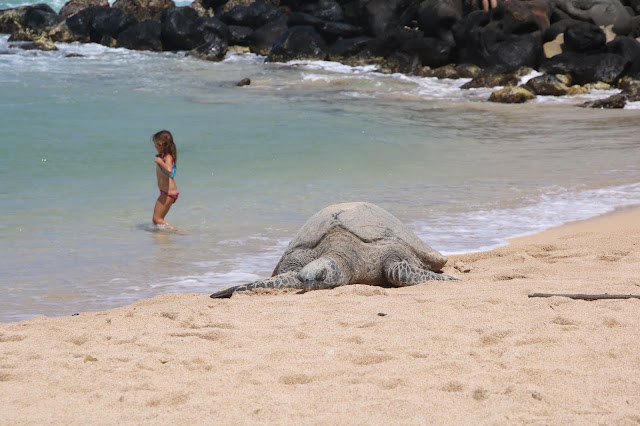 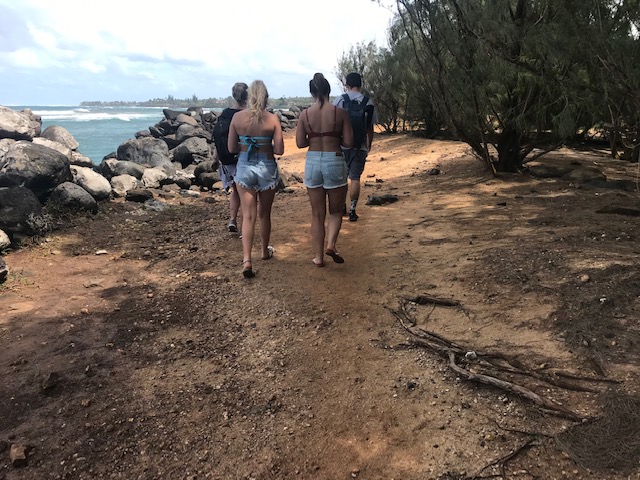 Anyhoodle, at this point, it was lunchtime, so we walked back through town, to Rock & Brews, a restaurant that the boys and I had seen earlier.

I ordered the chicken tacos and a Pina Colada, which, turned out to be a tasty choice, although, the Pina Colada could have done with an additional splash (or six) of rum; it was pretty weak. 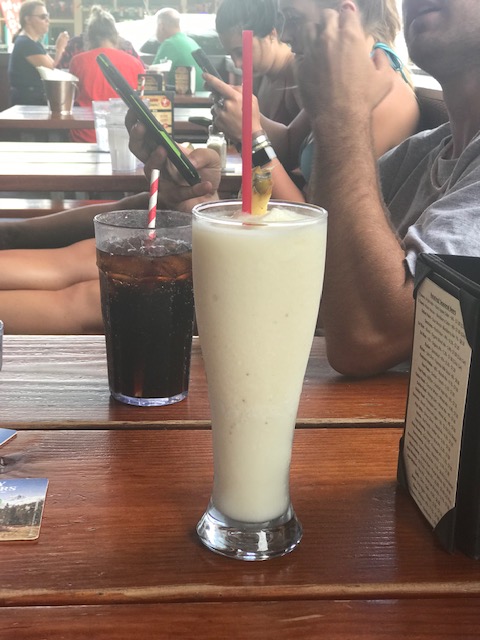 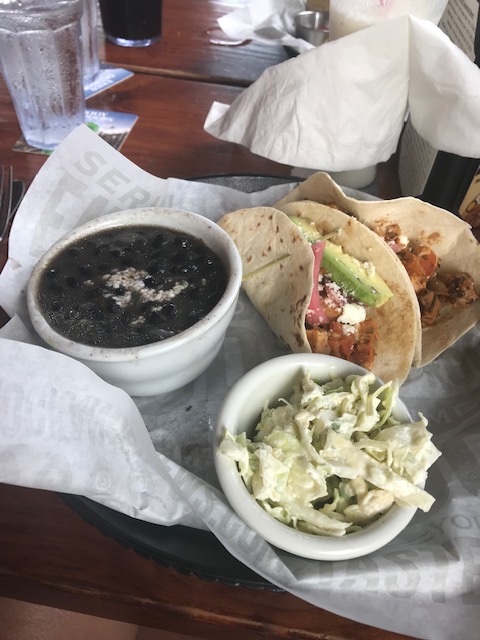 After lunch, we made our way back toward the airport, dropping off the rental car on the way. With some time yet to kill, we grabbed Starbucks, plugged our phones and other devices in to charge for the long flight home, and, browsed the various gift shops in the terminal.

Then, it was suddenly time for the Man-Cub to board his short flight back to Oahu, followed by our flight number being called not long after.

We had lucked out with a direct flight back to Denver, so, although we were still pulling the second all-nighter of the trip, at least we weren't switching planes or dealing with a lay-over. As it was, we arrived in Denver at 7:00 Sunday morning, which gave us plenty of daylight for the long drive home. Through snow. And, the aftermath of avalanches that had plagued the highways since our departure.

Welcome back to spring in Colorado.

Anyway, this wraps up the trip recaps! As always, Aunt Bertha appreciates your kind attention, and, would love to bake you some cookies (She'll also give you a quarter to rub her bunions! A whole quarter!).

Seriously, though, Maui is truly an amazing place to visit; it has taken the top spot on my Favorite Tropical Vacations list, topping Barbados and knocking Ohau down to fourth place (under the Florida Keys). I could write an entire post comparing Maui to Oahu (and, maybe I will), but, for now, I'll just say, again, thanks for hanging in with me!