Eating My Way Through the Weekend

Saturday morning, I loaded up the Tahoe and moved on down the road to Neighboring City, where, I met Queen B, Erin, and Kristi for a day of relaxation and fun. It was something that I desperately needed and I had been looking forward to it.

We started the day with a stop at Hobby Lobby, and, despite the shelves full of autumn decorations, I left pretty much empty-handed. This is becoming a trend (three times out of three, since the end of the lock-down) that makes me sad. If, when they finally stock the Halloween merchandise, I still fail to find something that blows my skirt up, I'm going to be very, very troubled.

Our first stop after Hobby Lobby was the nail salon, for pedicures, so, while I didn't score at the store, at least I was able to quell my disappointment with pretty toes and a foot and leg massage that went on for ages. 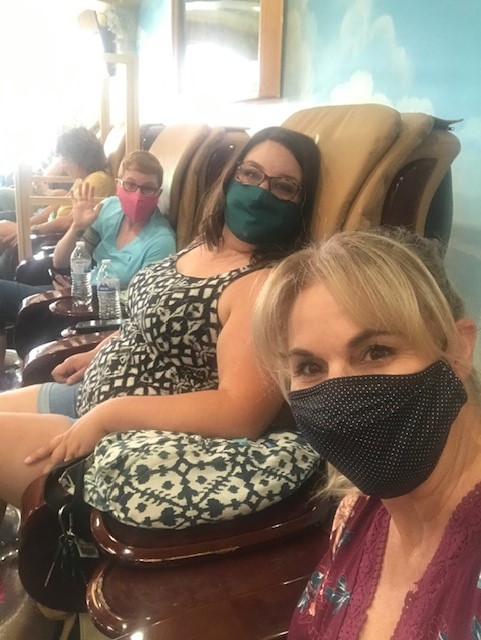 After pedis, we grabbed lunch at the first of what would become a deliciously long list of amazing restaurants. I had the spicy chicken quesadilla and it was really tasty; the restaurant grills their tortillas in butter, which both flavors the tortilla and creates a satisfying crunch that holds up to the melted cheese. 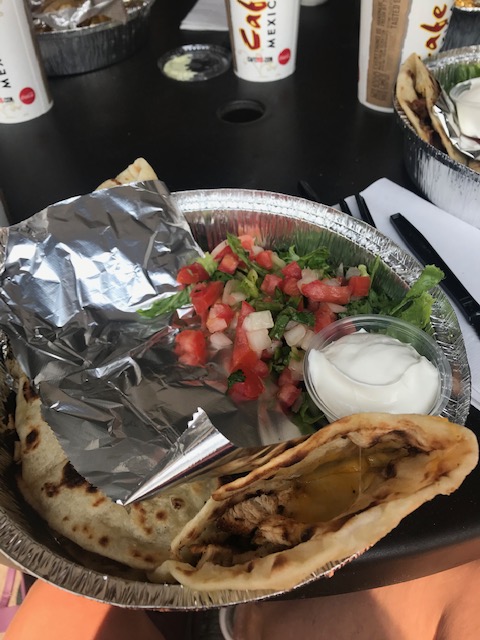 We did have one minor hiccup at the restaurant; Queen B's steak quesadilla had a hair in it. And, yes, that IS terrible and completely unacceptable and totally avoidable, etc., etc. But, they made good on our refund, and, honestly, in this day and age, I just think we have to allow a little room for grace in the face of error.

We actually talked a lot about error at our next stop; The Candle Kitchen, where we each made our own custom candle. Erin was of the opinion that Kristi's signature candle was a complete error because it smelled like old lady. You know, in her opinion. Kristi thought that her candle smelled just fine, in fact, I think she claimed it smelled "young and hip", which, between you and me, is practically impossible to do when the top note is lavender, but, Queen B and I wisely chose to stay out of that fight. 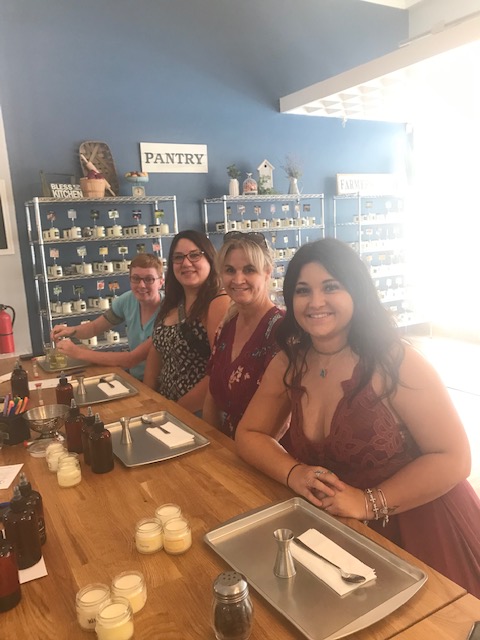 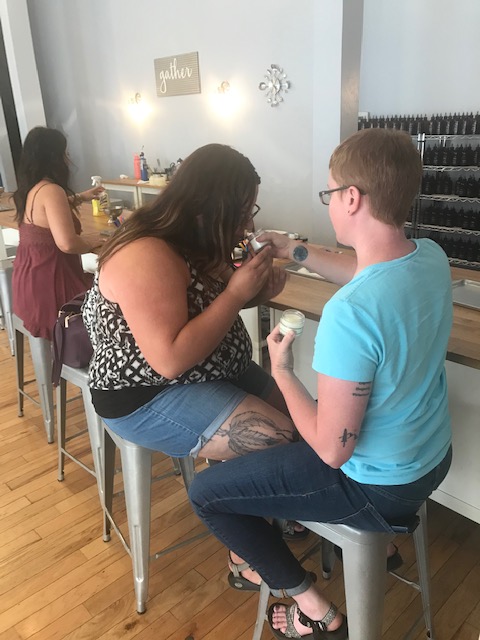 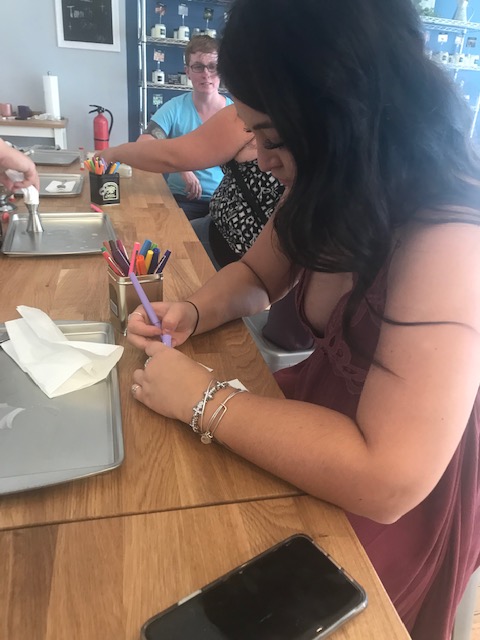 My own signature candle features a heady mix of lemongrass, morning dew, and old books, which, when combined, smells like spending a sunny morning on the porch, with my dog-eared copy of To Kill a Mockingbird. You'll have to take my word for it. 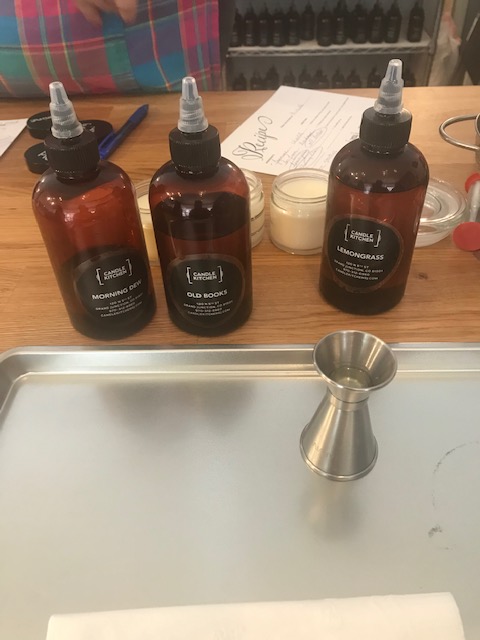 Once they are mixed and poured, the candles need to set for several hours to solidify, so, we went down the street to check into our hotel (yes, we stayed at a hotel, less than an hour from home. Even less, in Queen B's case; her house is only eight blocks away. They call it a Staycation for a reason). The hotel is at one end of the historic downtown area of Neighboring City. It is a great area for shopping, antique hunting, dining, drinking, and culture-seeking. Everything is within walking distance and car traffic is pretty light, so it feels safe and unhurried. There are also a number of really cool statues and art installations sprinkled throughout the neighborhood, including several that have fountains and water features incorporated into the design. 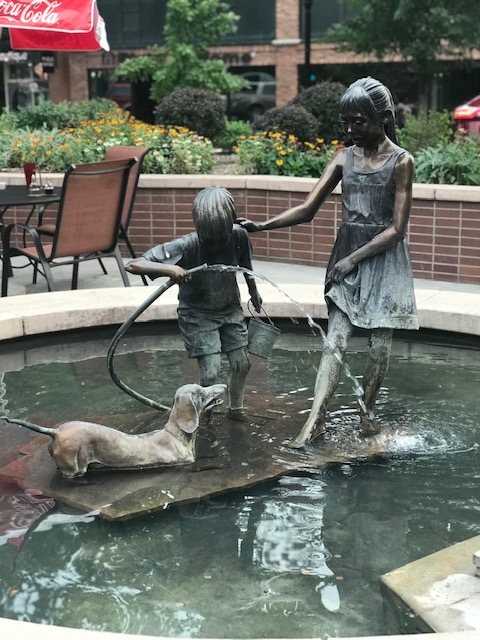 After we got our stuff stowed, we made a short drive to the winery where Queen B did her college internship. They still love her there, and we were treated to complimentary macrons following our wine tasting and charcutteri board noshing. 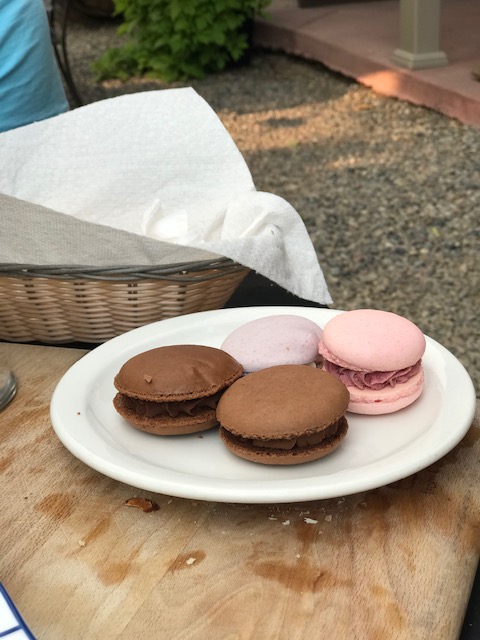 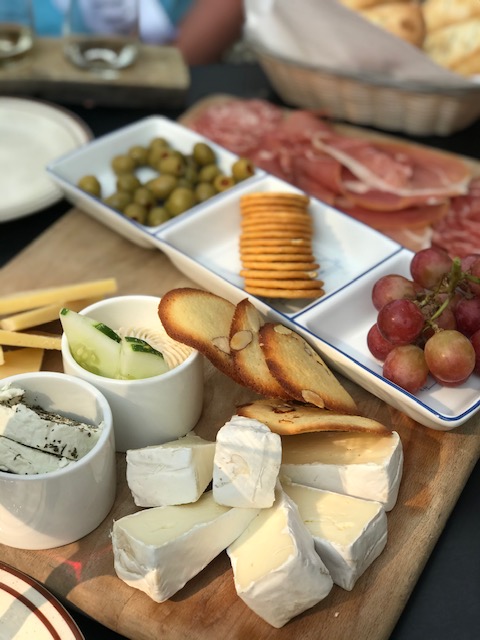 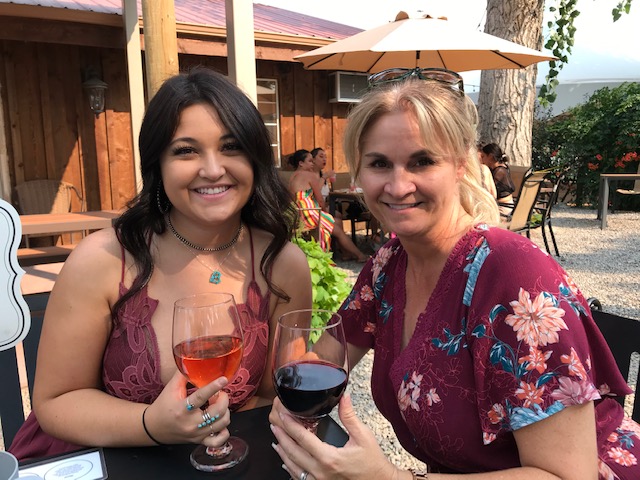 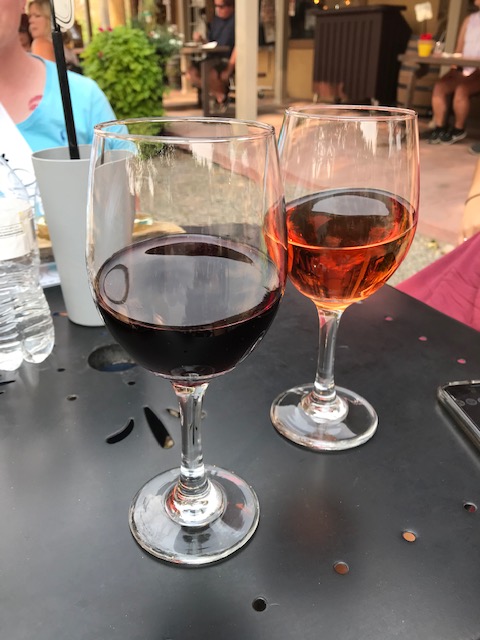 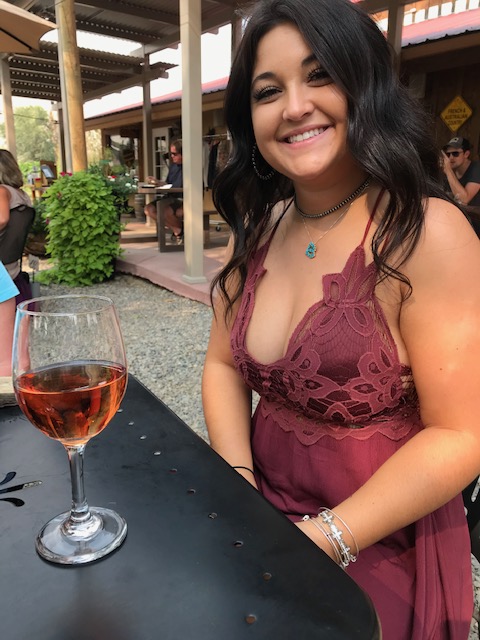 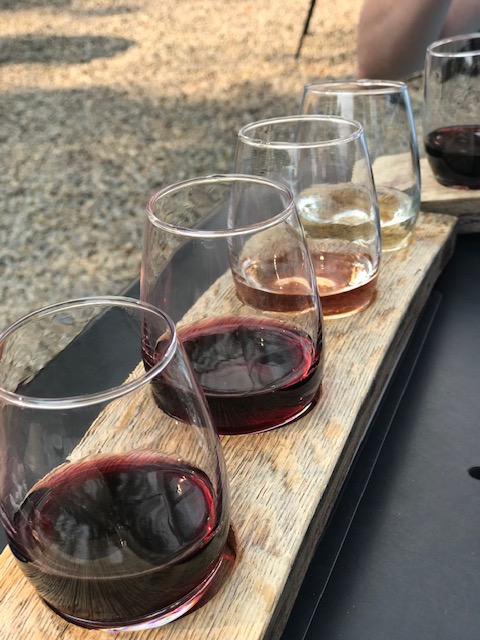 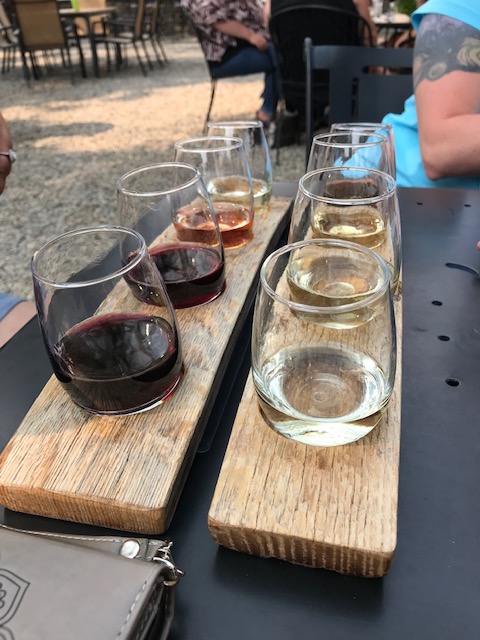 Relaxing in the vineyard was a great way to spend time until our candles were ready for pick-up, and, introducing Erin and Kristi to the concept of a wine flight was a lot of fun. Both of them enjoy sweeter wines, but, they were up for a new experience, and they really branched out from their beloved Muscato. I was proud. 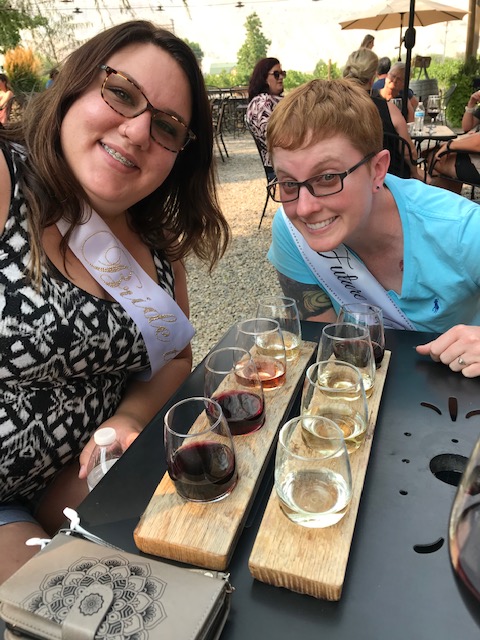 They totally regressed at dinner, but, baby steps.

Speaking of dinner, we ate at an amazing little Italian place mere blocks from the hotel later in the evening. I had a ridiculously rich dish called The Rosetta. It was handmade pasta, rosemary ham, and cheese, rolled into pinwheels and smothered in a spicy tomato-cream sauce. It. Was. Delicious. It was also incredibly filling; I could eat less than half of the serving and ended up taking the rest back to the hotel for a late-night snack. 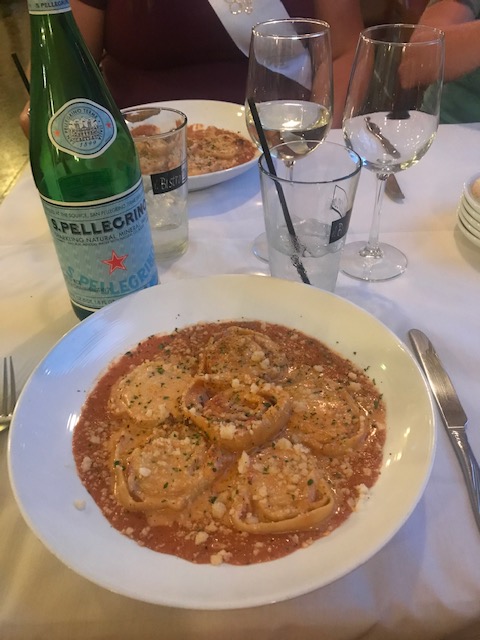 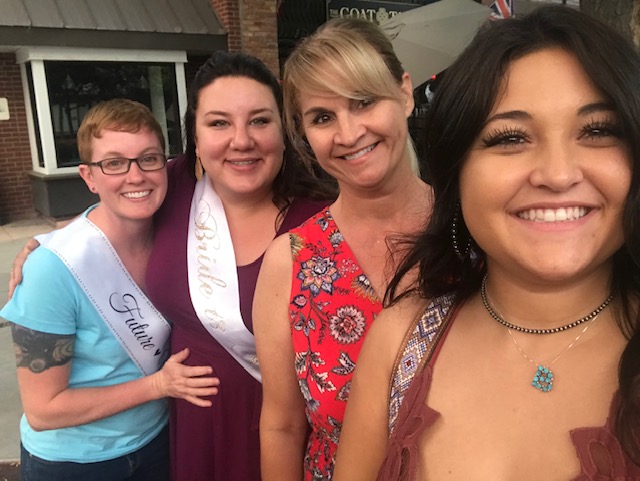 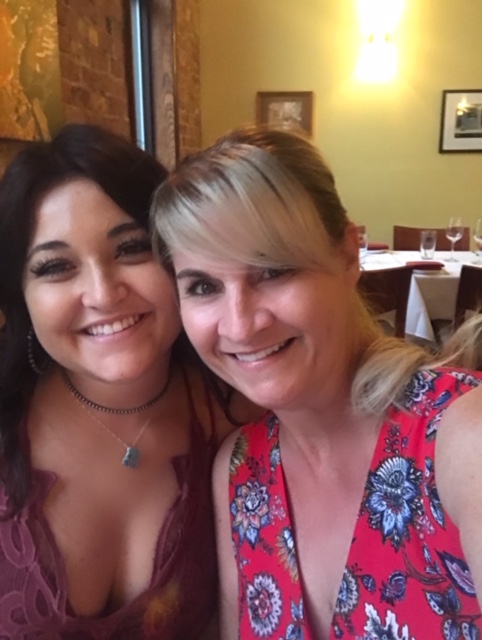 Since it was still fairly early when we got back to the hotel, we attempted to swim in the pool. Unfortunately, it was not heated and, at least one of us was too wimpy to get in the water (Me. It was me.). Queen B certainly didn't let the frigid temperature stop her; she even made a hilarious Tik Tok video, wherein she performed an aquatic rescue, utilizing the pool's safety flotation device and the theme from Baywatch.

We finished off the night with a bottle of wine in our room before bidding Erin and Kristi goodnight. Then, this morning, we met up for our last meal together; breakfast at a cute little diner. I had Eggs Benedict, which is my very favorite breakfast meal. I also ordered a ginormous cinnamon roll that came slathered in cream cheese frosting, maple syrup, and a dollop of whipped cinnamon butter. It was more than enough to split between the four of us and just about the sweetest way to finish off an amazing weekend. 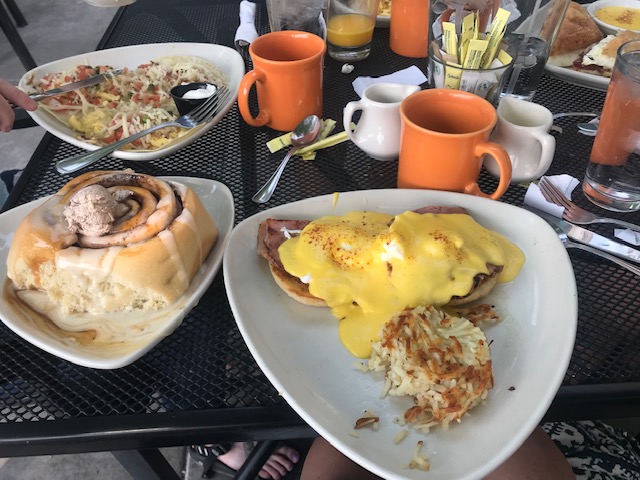 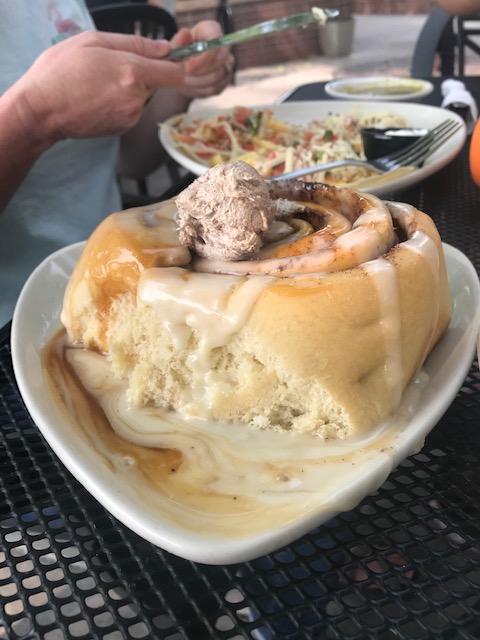 I probably gained five pounds in twenty-four hours, but, that's a small price to pay for the improvement it brought to my mental and emotional well-being. Besides, I can always exercise.

(We all know that isn't happening)