At the beginning of September, I wrote a post essentially promising 50% less whining on this here blog. It's now the end of September and I feel like I've done a remarkably good job of sticking to that promise. That being said, today, I reserve the right to utilize a few fractions of what remains of my free bitching time.

Vexation Number One: I know we are in a pandemic and, as such, the usual supply chains between the US and countries from which we import goods have been interrupted, but, does that actually explain the shortage of replacement CO2 canisters for my Soda Stream? Is all carbon dioxide produced in some foreign country? Or, are there people out there, stockpiling the canisters like people hoarded toilet paper in the Early Days? I am so confused. And, less bubbly.

Vexation Number Two: Also, on the topic of ridiculous shortages; let's talk coins. I have friends who work in banks who have assured me that there is no shortage of rolled coin. Those same friends also assure me that cash is still a perfectly acceptable form of currency with which to purchase goods and services. So, why does the Hellmouth no longer accept cash in any of their self-check kiosks? I prefer to use cash over credit and to use the self-checkout because it's generally faster and more convenient; now I can do neither. This is actually just one of my many vexations with the Hellmouth (that would be Walmart, for the uninitiated), but it may be the straw that breaks the camel's back as far as continuing to shop there goes.

Vexation Number Three: Where have all the Halloween decorations gone? Hobby Lobby skipped right to Christmas, as have the Hellmouth and Target. Gone are the awesome displays of merchandise that have always made Target a destination for me this time of year. It makes me really sad.

Vexation Number Four: The whole "busting out Christmas merchandise in September" thing. At this point, I'm seriously considering a boycott of Christmas shopping just on principle. Maybe this is the year for us to exchange hand-made gifts or to simply revel in the gift of time spent with one another. I could totally get behind that.

The Final Vexation: Home Depot was selling this awesome, amazing, truly spectacular twelve foot skeleton, and, it would have been perfect for this year's yard display, so, of course it is sold out and probably will not be back in stock this year. 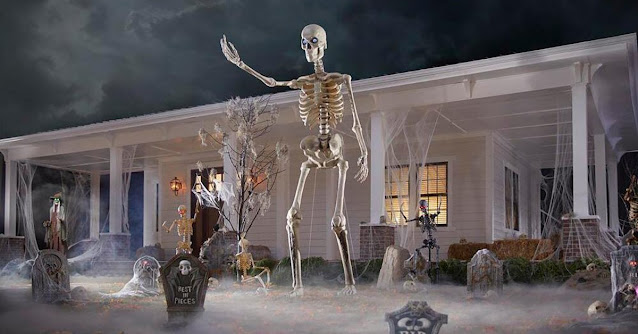 And, with that, we return to our regular programming, now with 50% less whining!