Digging Out of the Rut With a Fork and a Spoon

Remember my quest to try new things? Remember, specifically, that I was going to make homemade cream of mushroom soup? Well, I tried it last night and, let’s just say that, depending on whom you asked; the end result resembled either a melted Oreo Blizzard or dirt soup.

And, I’m guessing you can accurately identify which of my children made the comparison to dirt.

For the record, while the soup looked less than appealing, it tasted quite delicious; the Man-Cub even ate a full bowl while making up limericks with words that rhymed with dirt and soup (you guessed correctly, yes?) and, since his class is working on limericks right now, it was almost like I was providing an educational experience right there at the dinner table.

I am so going to bring that up at our next Parent/Teacher conference.


My second attempt at something new followed dinner and, while the jury is still out, appears to be at least a partial sucess; I decorated a cake for tonight’s baby shower and I used rolled fondant to do it.

The fondant was sort of a challenge to work with but; the end result was not horrible to look at. Of course, if that project turns out to be the mirror opposite of the soup, it will look good and taste like dirt. 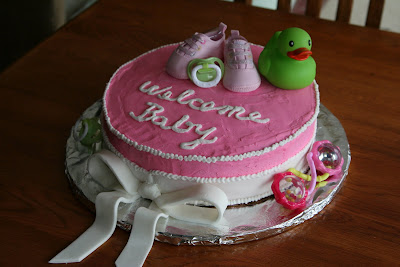 So, yeah, fingers crossed that the cake tastes at least as good as it looks.

And, in the future, we will all wear blindfolds when we eat my homemade cream of mushroom soup.
Posted by Chelle at 2:00 PM