Your diabolical plan to ruin my weekend by dumping six inches of snow on our area was an epic failure.
Sure, the Man-Cub and I weren’t exactly thrilled about having to shovel the driveway (twice) since Hugh was in Denver at the state wrestling tournament and, no, my parents didn’t exactly love driving through near white-out conditions to reach us but; they made it here and we had a great weekend despite your antics.
In fact, it was one of the best weekends we have had in a while and, not just because The Teenager’s basketball team won their end-of-season tournament in a nail-biter of a game that came down to a final free-throw to win it, although; that was pretty damn sweet. 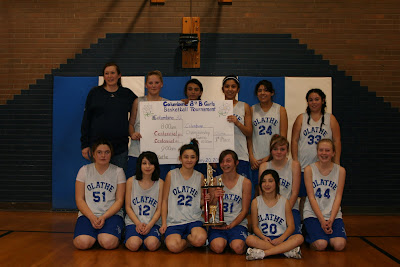 We also braved the ice and snow to drive to Neighboring City for her volleyball tournament on Sunday and, while they didn’t win there, the team certainly kept us all entertained, especially when they were pitted against the only boy’s team in attendance and made comical use of their feminine wiles to distract them from their game play.

And, while their efforts at distraction by flirtation may not have exactly proven successful, they certainly had a good time trying and, made a few new friends in the process.

Also, your late-afternoon hissy-fit mountain blizzard failed to prevent Hugh from traveling back from Denver in time to join us for the final volleyball game or from joining us for dinner at The Olive Garden so; I do believe your efforts were futile this weekend.

And, if my parents can’t make it home today because you have screwed up the roads between here and Mayberry, the joke is on you because; we’d rather they stay, anyway.

So, take that, winter!