This afternoon, in a Theraflu-induced stupor, I accidentally ate a bowl of chicken noodle soup. I say accidentally because; I am observing the Lenten ritual of meatless Fridays and, the last time I checked, chicken was a form of meat. Whoops.

As I said, I blame the Theraflu.

In an effort to redeem myself, I have managed to avoid meat for the remainder of the day and, for dinner tonight, I will be eating a salad which, reminds me of the time that I was hugely pregnant with The Teenager and, craving a salad from the local supermarket salad bar.

Being a good sport about my cravings, Hugh drove us to the supermarket and patiently waited as I assembled the perfect salad; he even had the good grace to look the other way when I spooned crumbled blue cheese over the entire thing plus a ladle-full of blue cheese dressing, nor did he bat an eye at the mega-pile of croutons I casually tossed on top (I was eating for two!).

Once we got home, I made myself comfortable on the couch, balancing the salad container on my (sizeable) belly and, went to town. Midway through the salad, I took a bite of something crunchier and more bitter than I expected, chalked it up to a healthier than usual piece of arugula and continued shoveling the salad into my pie-hole.

Hugh asked me a question a few seconds later and, I paused with the fork midway to my mouth to answer him. When I happened to glance down at the fork seconds before placing it in my mouth again, I saw this 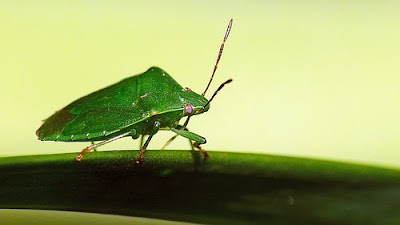 waving its’ antennae at me from a blue-cheese coated leaf of lettuce.

Only, due to its’ proximity to my face, it looked more like this 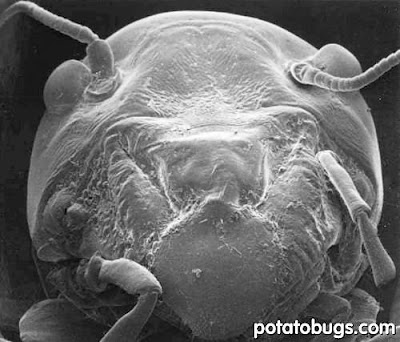 Which is when it dawned on me that, the unusually bitter and crunchy piece of arugulaI had just swallowed was probably nothing of the sort but, instead; a cousin or other kissing-kin of the humongous bastard insect upon my fork.

There was screaming and, I’m not too proud to admit; some vomiting.

WhileI did eventually get over the avoidance of salads born that day, I never quite got over my distrust of salad bars in general and now prefer to make my own salads at home. Also, if I ever think about how well I would do on Survivor, I need only recall the taste and sensation of biting into that creepy green bastard and I have no doubt whatsoever that I would royally suck at the food challenges.

So, no Survivor in my future, obviously.
Posted by Chelle at 6:40 PM