Now I Know Where Stephen King Gets His Inspiration

Last Friday I was up at 5:00 to take the Man-Cub to the school to catch the bus for the school ski trip. Usually, the Cub is the first one downstairs in the morning so he takes responsibility for feeding the cat and the dog. Being that it was 5:00 in the morning and the cat was still sleeping in his bed in the living room; the Cub skipped the morning feeding, assuming that I would handle it when I got home.

After dropping the Cub off at the school, however, I went upstairs and took a nice long shower, planning to feed the cat when I was finished. Once out of the shower I then went about the steps in my morning routine. After a bit, however, I began to hear the faint sounds of the cat meowing at the foot of the stairs.

Before I had a chance to finish, I realized that the meowing sound was getting louder and I assumed that meant that Gilly was really, really ready for his breakfast so, I hurried a bit to finish my primping.

A few minutes later the meowing wasn’t just louder it was closer, like, right outside the bathroom door which of course made no sense considering the fact that the cat can no longer climb the stairs.

Or so we thought.

I don’t suppose I have to tell you that I whipped that bathroom door open in a hurry. Gilly was, indeed, in our bedroom and he was pissed.

Hugh, despite being in a deep sleep courtesy of the doctor-prescribed happy pills, awakened immediately, shot straight up in bed and said “Is that the cat?!” To which the cat replied in the positive with an ear-splitting “Meoooowwww, fuckers! ‘Tis I, your poor mistreated and underfed cat! Feed me now or I will drag my decrepit ass back up those stairs later tonight and steal your breath while you are sleeping”.

Or, he meowed piteously while glaring at us both in a most accusatory manner, either way; the cat got fed immediately.

Not surprisingly, he hasn’t been back up the stairs since. Granted, his food dish has not since been allowed to go empty but that’s just a coincidence.

It’s not like we are actually worried about him stealing our breath in our sleep or anything. 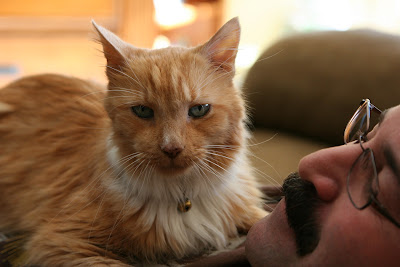