He's back to using his litter box, eats like food is going out of style and has taken up a few of his old habits, napping on the rug in the kitchen being one.

In fact, napping has become his favorite pastime so much so that; we purchased two comfy beds for his use. He's quite fond of the one in the living room and, since he is no longer able to climb the stairs to our room at night, has taken to sleeping in it, instead of at the foot of our bed. 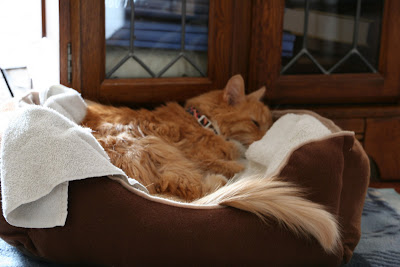 The vet has upgraded his condition from acute renal failure to mere chronic renal failure which, if I understand it correctly, will eventually lead to the same outcome although in a much slower manner and, I can live with that; a cat dying of old age is one thing, a cat dying from an illness that we could have treated would be quite another.

So, that's where we are with the Gilly Monster.

Then, there is Rowdie. 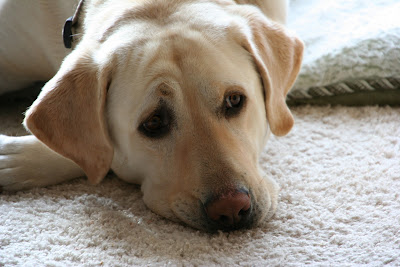 Whom, it should be noted, has been quite patient with us given the fact that all our attention has gone to the cat, lately. In fact, despite a recent tendency toward deep, grumbling sighs of disgust when we baby-talk the cat or when Hugh reclines on the couch with the cat on his chest , he has, for the most part, bucked up under the pressure of being the less-attended-to pet. 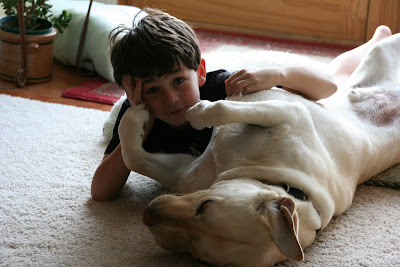 As for updates on my (somewhat) less furry children; The Teenager is deep in the thick of team volleyball, having attended two practices as well as an all-day clinic geared toward certification in volleyball refereeing and score keeping. For the record, she was not at all thrilled about spending an entire Saturday in a drafty classroom but, much like the dog, she bucked up under the pressure.

The Man-Cub had his first basketball game yesterday and he did great! For never having played the game, he showed a natural affinity for the sport which comes as a surprise to no one, most especially my father who is no doubt nodding his head as he reads this whilst thinking to himself, "But of course". 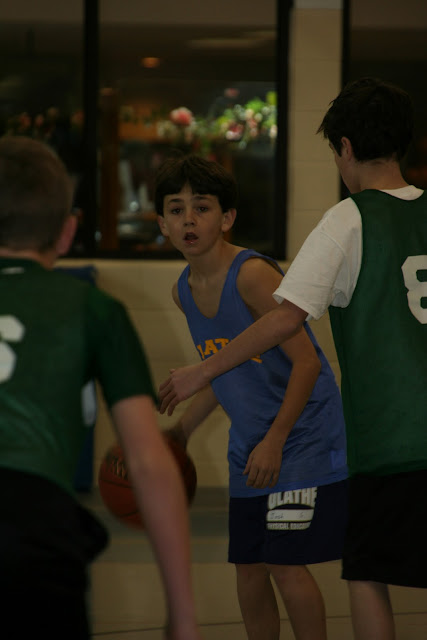 Anyway, my limited knowledge of the sport entitles me to report that the child is playing the position of point guard, he is really good at not telegraphing his passes and he really, really needs to work on his shooting, specifically on using the backboard to sink his shots.

There, I sound almost authoritative on the subject.

In household news, thanks to the recent cold-snap, a couple of snow storms and Hugh's crazy-ass refereeing schedule, our home is still adorned with outdoor Christmas lights. Last year, the lights didn't come down until March; who wants to lay odds on them coming down right around tax-time, this year?

In a similar vein, is it spring, yet? Because I would really like to get back into my garden. And, you know, to sit in the sunshine. And, enjoy a Porch Night which, this year, will be better than ever thanks to the DVD projector that Hugh bought me for Christmas; I'm thinking Porch MOVIE Night.

Plus, the porch is going to look ever so pretty this summer; the Christmas lights adding a certain ambiance, and all.
Posted by Chelle at 10:52 AM