We have had a handful of nice days so far this "summer". Unfortunately, the wind has not yet received the  memo about it being summer and has continued to blow (I just mistyped emo for memo which, could be my subconscious reminding me exactly how I feel about the wind) which makes even a warm, sunny day kind of suck ass (Nope, didn't need my subconscious to remind me after all).

In spite of the wind, we are soldiering on with summer-like activities here at Casa de Chelle. For instance, The Teenager is currently camping next to a geyser in Utah with Kaz and her parents. apparently, geysers are super-cool when the water is propelled thirty miles per hour by wind gusts which tells me that my daughter has both inherited my optimism and that she enjoys the great outdoors much more than I ever did.

While his sister is roughing it, the Man-Cub has been working at the hardware store. It was totally his idea. In fact, he approached Hugh and me separately with the following proposal: he would work three days a week from 9-1 in exchange for $20, cash money.

$20 for 12 hours of work a week is a bargain so, we took him up on his offer. So far, he has dusted every shelf in the store, swept the floors and, in his spare time, taught Otis to roll over for treats. I'm afraid I may have to insist on giving him a raise if this level of dedication continues. Of course, it is early yet.

Speaking of giving the kid money; I owe both children some major cash for getting good grades on their final report cards. Hugh owes The Teenager a belly ring but, that is between the two of them. As an aside, if he bets her a tattoo that she can't stay on the Honor Roll again next year, I just might end up widowed.

In gardening news, which has absolutely nothing to do with anything else that I have been talking about, I have a pretty good start on carrots, beets, lettuce, radishes, tomatoes, peppers, cucumbers, strawberries, green beans and spinach. In addition, I have the beginnings of about thirty sunflowers. I did not plant sunflowers. I'm thinking about letting them live simply because I admire their tenacity. Also, sunflowers remind me of summertime which, will be here any day now.

You know, once the wind stops blowing.

On the bright side (see? Optimism), the porch is totally ready for Porch Night. And, if the wind should blow hard enough, we will tether ourselves to the posts with bungee cords to prevent ourselves from flying away. Or, we will invent a new extreme sport wherein you fly, tethered by bungee cords, high into the sky like kites. Ok, wait, that would actually be wicked cool; I bet we could score a reality television show out of that. 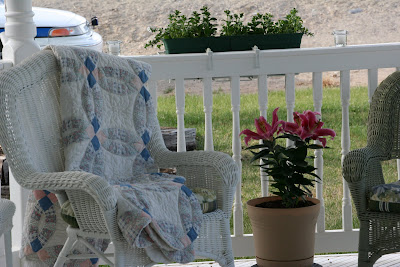