Friday night, Hugh, the kids and I went out for a quick dinner at our favorite Chinese buffet before taking in the early showing of Super 8. Without providing any spoilers, I will tell you that the movie was really good. I will also tell you that, despite what Hugh initially feared; it was not a documentary about a budget-rate motel chain. Oops, spoiler!

We went to the early showing of the movie because the Man-Cub had to be up at the crack of dawn on Saturday to catch the bus to his wrestling camp, a camp at which he was sorely outweighed by the competition but at which he managed to learn a lot and to have a great time doing so.

While the Cub was "camping", The Teenager and I took a drive to Neighboring City and, by "took a drive" I mean; she drove. As nerve-wracking as I thought it would be to put the child on a major (ok, major for our neck of the woods) highway for a forty-minute drive, I was pleasantly surprised; the drive turned out to be pretty relaxing and The Teenager and I had a great conversation and more than a few laughs. 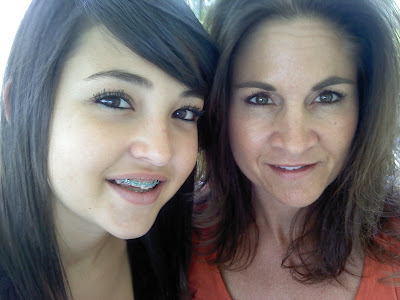 Stop being so grown-up, already, damnit!
Once we got to Neighboring City, we hit the mall in search of a dress for The Teenager to wear to the upcoming wedding of Brandon's sister and her fiance. As luck would have it, we struck out at every store except for the very last one that we planned to visit and, there, we found the perfect dress which led to the search for the perfect shoes (which we found, once again, at the last store we intended to look in) which led to the need for a stiff drink or, a Starbucks frappuccino, at any rate.

Then, it was back on the highway for the return trip which The Teenager handled with skill and grace once again despite the fact that I probably got on her last nerve by asking her if she thought the Man-Cub was having a good time at camp and if she thought I was doing the right thing by not going to watch the wrestling duels that were held during the camp, you know, every two seconds or so.

For the record, the Cub was fine. He had a good time. He was happy with his independence and, clearly, I am getting pathetic and clingy in my old age.

Plus, he was home by 7:30 and I got to hear all about his day before tucking him into bed and setting my alarm for four o' freaking-thirty the following morning so he could get up and do it all over again, minus as much fretting on my part (ok, not really, see above: pathetic and clingy). 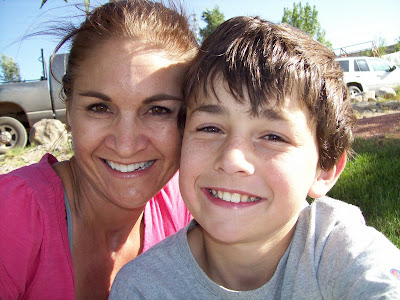 On the bright side, getting up that early on Sunday morning allowed me to get a (really) early start on the day's laundry and I was able to hit The Hellmouth for groceries while the rest of the population was either still sleeping or getting ready for church, depending on their level of heathen-ness, and; I was done grocery shopping before Hugh and The Teenager even got out of bed (because we are heathens, hear us roar).

Then, I spent the rest of the day toiling in the garden, where I harvested some fresh oregano, basil and parsley for the homemade lasagna that I baked for dinner that evening.

I also swept down the porch and made a run to a nearby five-and-dime (yes, an actual, old fashioned five-and-dime) to pick up a plethora of classic candy for this week's Porch Night which is going to feature a Summer Nostalgia theme.

The Teenager went with me on that excursion (She drove. Are you sensing a theme?) and, again, we had a great time together despite what I'm sure she considered a particularly boring commentary from me on what my childhood was like, how summer back then seemed to last longer, and about how we were never as scheduled as The Teenager and her brother are now and days and, by the way; how did she think her brother was doing at camp?

But, it was a good weekend; one that will be somewhat replicated this coming weekend when The Teenager is away at volleyball camp and, by replecated, I mean; I'll be whining about mah baybee being away from me to my other baby except, that baby won't be driving me anywhere.

Oh my god, I just thought about the Man-Cub driving.

I definitely need to see a professional.
Posted by Chelle at 8:44 AM