So, after putting some serious thought into what could be causing my random allergic reactions, I arrived at the conclusion that I am allergic to Finnigan. Or, more accurately, to Finnigan's dander in my mouth. And, how does cat dander get into one's mouth? I assume by eating something by hand after touching either the cat or something that the cat has touched. This makes sense to me because, when Gilly was alive, I used to have an allergic reaction in my eyes when I would pet him and then touch my face; not always but, often enough that I learned to be careful about washing my hands after snuggling with him on the couch. So, I am now making a point of washing my hands prior to eating anything that doesn't require a utensil because, it's either that or I give up snack foods like chips, crackers and pretzels which were the three things I ate prior to each of my reactions and, I don't really want to give those things up. I mean, my ass would appreciate it if I did but, yeah, not so much.

Also, I'm not giving up a cat who can drape himself across my neck for hours at a time without triggering any sort of reaction but around whom I should not eat snack foods because that would just be silly. 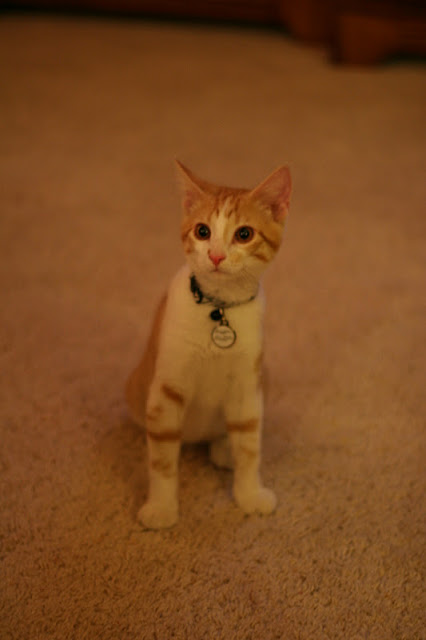 Finnigan would agree
When I presented my theory to Hugh, he asked me how I could be sure and, while I haven't done any sort of experiment to prove my theory (PETA frowns on rubbing a kitten across one's gums, I hear); I'm confident in my conclusion.

On a related topic, the timer for my washing machine finally arrived and I can now do laundry in the privacy of my own home (washing gets the dander out, yo). Also, the parts for my vacuum cleaner and hot water dispenser arrived and Hugh fixed them both (vacuuming also gets the dander out). The problems with the furnace appear to have worked themselves out and, with the exception of the Man-Cub's arm, we are totally mended.

This year is looking up.
Posted by Chelle at 8:43 AM