April is almost over, and, at the risk of sounding like a broken record; I can't believe it went by so quickly! Last April (in The Year That Shall Not Be Named) crept by at the pace of a glacier, but, this year, like every month before it; has gone by in a blur. I guess I better link up with Sheaffer and Shay to recap what's been happening in my neck of the woods before I forget. 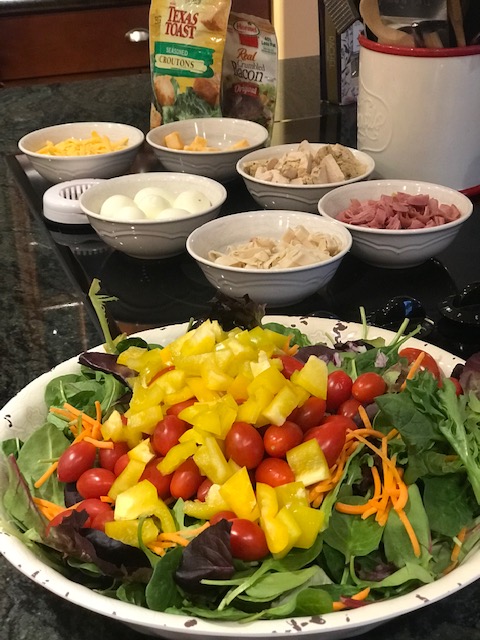 I do try to throw some form of lean protein onto each salad, whether it be turkey, chicken, beans or eggs; making Chef's salad has become a favorite way to accomplish this.

I also had an amazing Asian BBQ chicken salad from a local restaurant this week at a working lunch with my team. 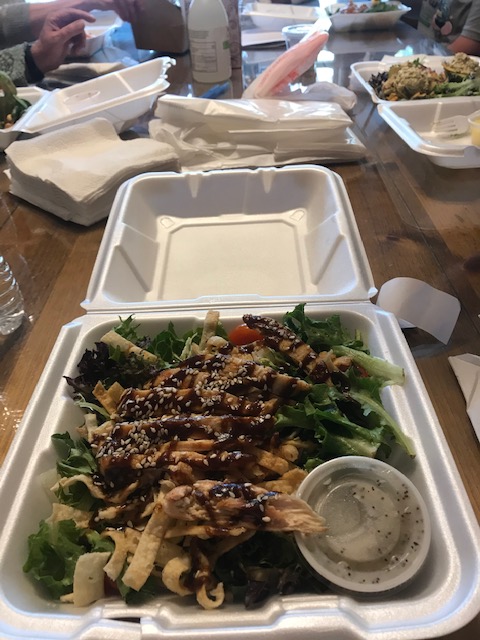 It's coming up on prom season here in Petticoat Junction and it looks like the kids are actually going to get to have one! It's going to be an indoors/outdoors event, which will be different than in years past, but I don't hear any of the kids complaining. Hearing about the event brings to mind the many, many pre-prom dinners that Hugh and I hosted, as well as the fun we had attending each Grand March. It's not every day that a parent gets to see their offspring dressed to the nines and I'm glad we never missed it (still feel awful for the kids who had to miss theirs last year). If you're super interested in long, drawn-out posts about other people's kid and their proms, I've linked to ours below.

Kristi and Erin shared a sneak peek at the wedding pictures from earlier this month and they are great! What a fun wedding that was. 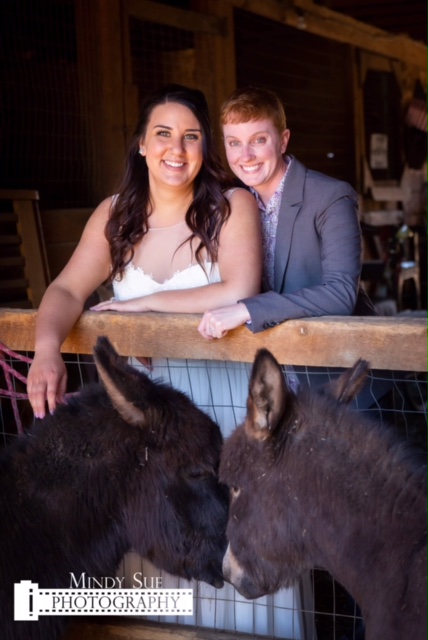 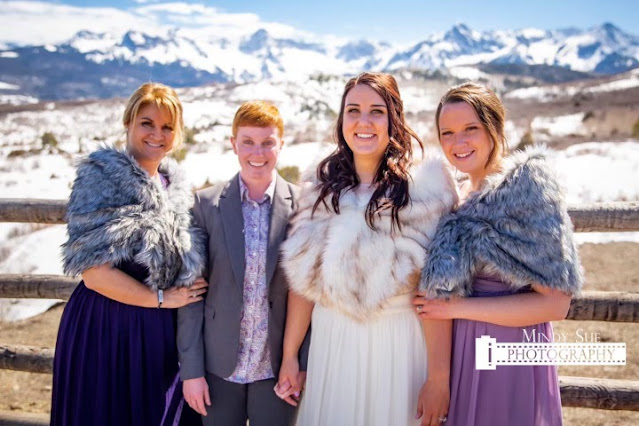 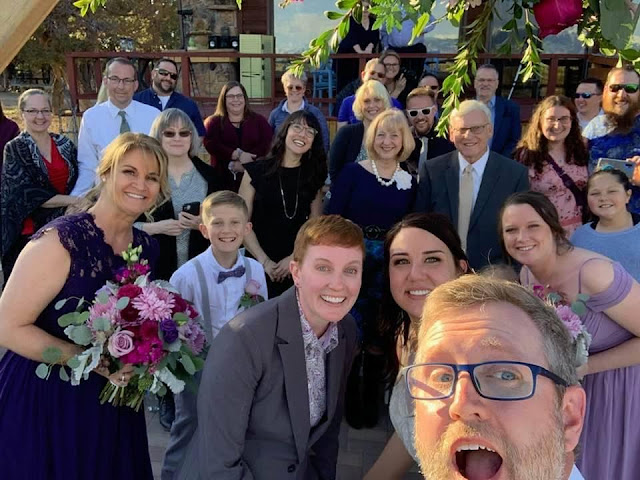 Hugh has been working diligently on his EMS training in addition to running the hardware store and officiating the odd wrestling tournament or baseball game here and there. While he's been busy with all that, I've been slowly working my way through my household To Do list, which included risking life and limb when cleaning out the cabinets in my mud room. Up next will be my office and then the linen closet. Living the dream over here, folks!

To put a different spin on this question; I've been working on this new extension that allows me to convert my workspace into a standing desk. It's been great for my back and I believe that standing is a lot better for me than sitting. 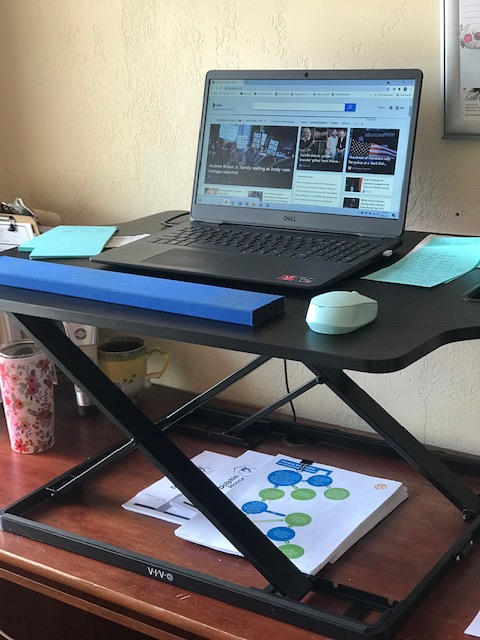 And, to answer the question a bit less literally; I am also working on a golf tournament for Not So New Job. Last summer, we had a record turn-out and I'm hoping to top it this year. I'm also working on our autumn fundraiser, which is a barn dance. Due to Covid, the dance was cancelled last year so this is my first go at it. Fingers crossed for a hugely successful event.

I've got to get serious about exercising again. I am dreading the soreness that inevitably follows because it causes me to suffer from Exercise-Induced Tourette's Syndrome, wherein every time I squat to sit on the toilet, I involuntarily curse. The same goes for every time I roll out of bed, walk up a flight of stairs, sit in a chair, get into-or-out of my car, etc., etc.

Sailors would blush, y'all. Seriously.

Hugh and I pulled the trigger on a house rental in Hawaii for the Cub's graduation in December. It is a large expense, so it took a lot of mental debate, but; I'm so excited about it, I can hardly stand myself! Now, to lose the Covid weight so that I can frolic about on the beach without worrying that someone will mistake me for sea life and roll me back into the ocean. 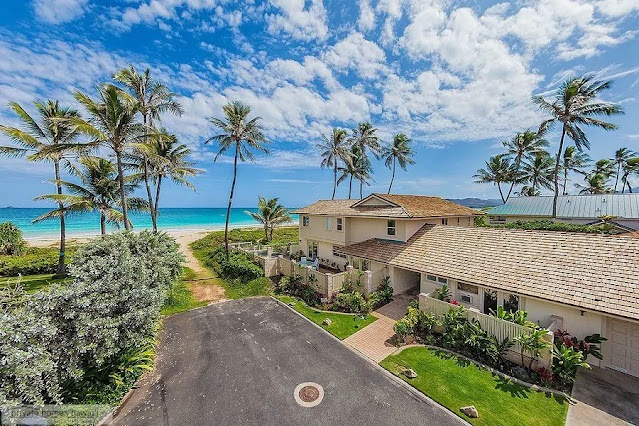 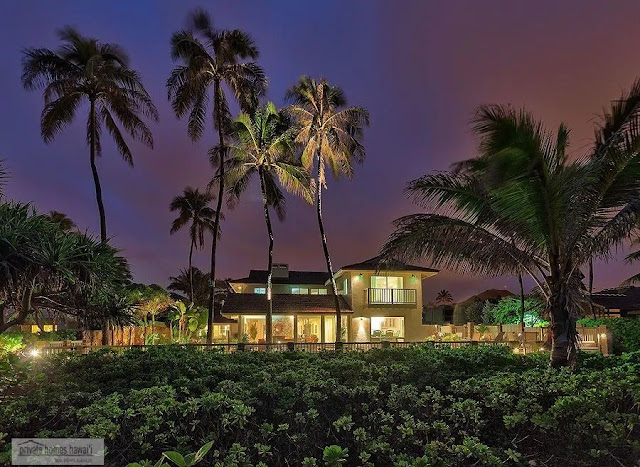 I finally got on The Marvelous Mrs. Maisel bandwagon. I would make an excuse about why it has taken me so long to join the party but, since I have always prided myself on being a late adopter, I'm really just being consistent (examples include Friday Night Lights and Schitt's Creek). 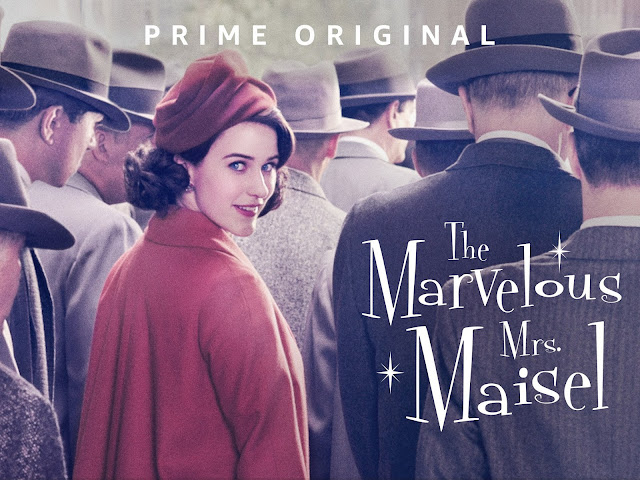 I'm also watching Bloodline on Netflix. I'm on Season 2 which isn't nearly as good as Season 1 but, at this point, I'm invested. Also, it stars Kyle Chandler, whom I have been crushing on since way back when his career started on Homefront (all of which makes my late adoption of Friday Night Lights all the more tragic). 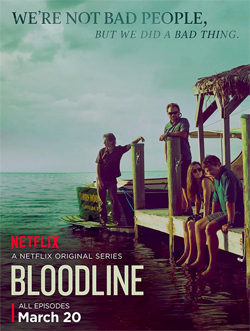 Queen B suggested that I watch Dirty John and I'm five episodes in and fully invested. If you've ever known a real, live psychopath this is probably not the show for you; triggers abound. 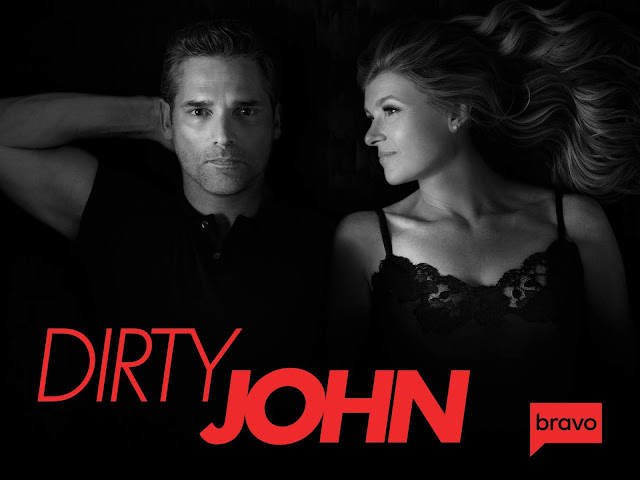 I haven't been reading a lot this month (like, at all), but I was super excited to learn that the next book in the Outlander series is set for release in November! I have already pre-ordered my copy and cannot wait to catch up with Claire and Jamie. 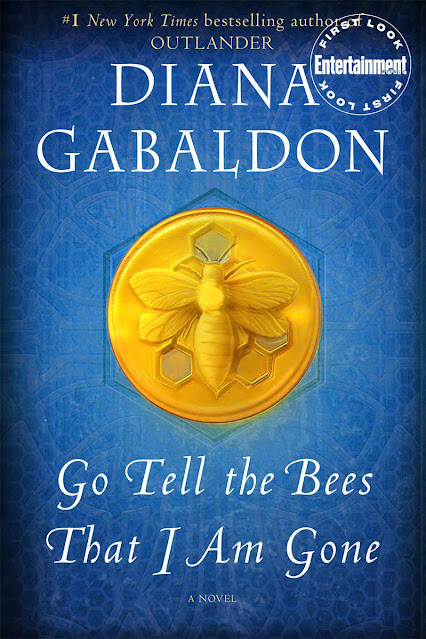 When I have time at home, I like to put a record on my record player. At the risk of showing my age, the albums in current rotation include: 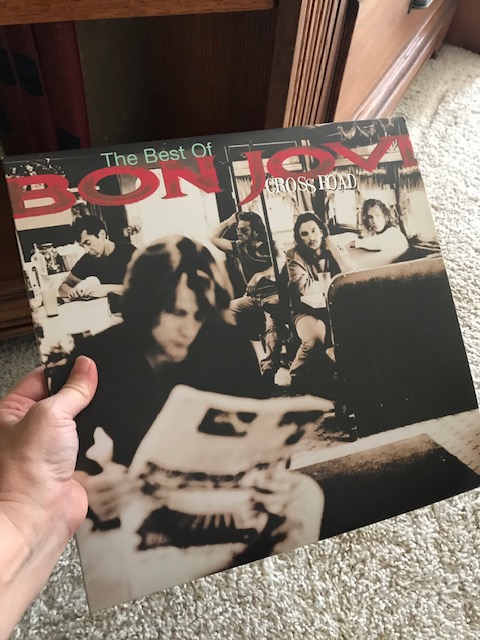 Bon Jovi, who, is a hottie even all these years later. Oh, and a hell of an artist. And, a humanitarian. Ahem. The soundtrack from Footloose, the original, not the remake starring that chick from Dancing with the Stars, although, that soundtrack is also pretty awesome and I listen to songs from it when I run because I am not a total curmudgeon (also, I totally know that her name is Julianne Hough, I'm screwing with you). 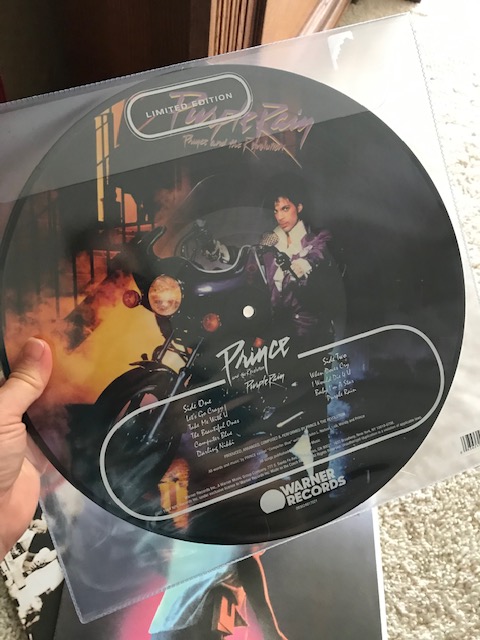 Prince, before he was The Artist Previously Known as Prince, and way before he was that ridiculous symbol that meant absolutely nothing to anyone. 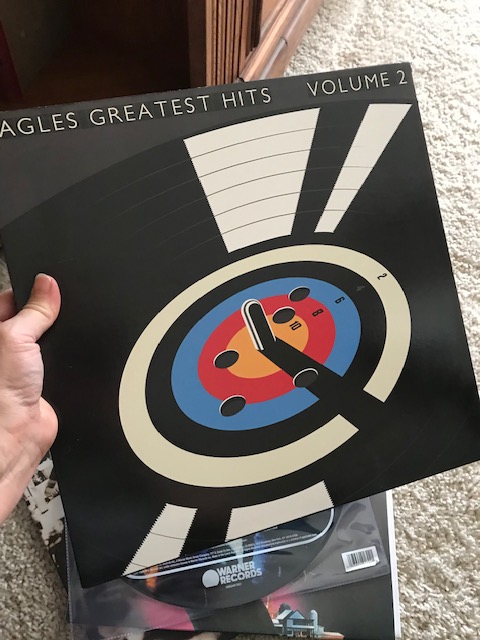 The Eagles, who are timeless and therefore not indicative of my advanced age (that's my story and I'm sticking to it).

I recently set aside my leggings in favor of maxi dresses. This makes sense since maxi dresses are nothing more than the leggings of the dress world; comfy, stylish, and they hide a multitude of sins. They also have a slight advantage over leggings because they have pockets.

If the weather cooperates, I am planning to open the porch for the season. I also hope to replant my succulent planter; it did not fare well over the winter (my fault, apparently succulents, while super hardy, are no match for an early Colorado freeze). I doubt I can come close to recreating the look I achieved last year, but, I'm going to give it the college try. 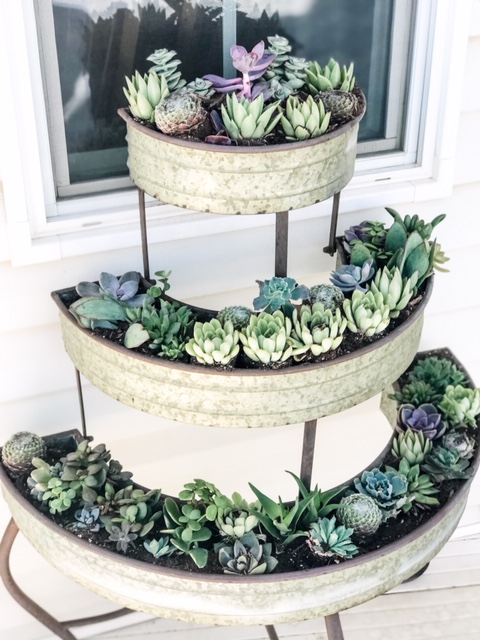 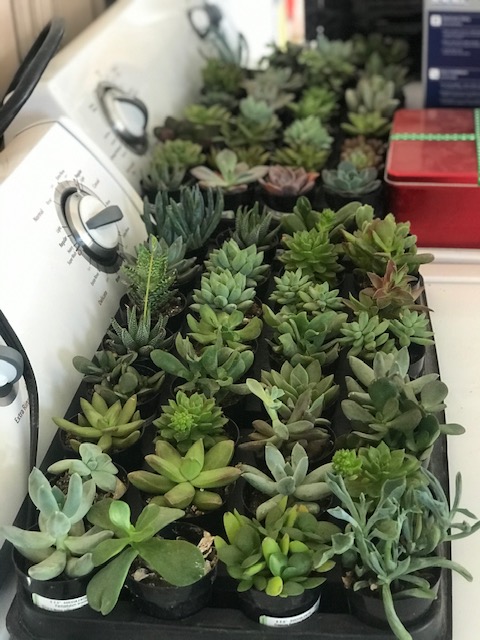 The Man-Cub is coming home next weekend! He will be working in Neighboring City again this year, and, while he has no idea where he will live since we sold the house there, he's really looking forward to being home. I am hoping he and Mikey will find a place to rent (Mikey is currently crashing at his sister's while he looks for a house to purchase), but, if worse comes to worse, we have offered the use of Jenny for the summer (Jenny is our motor home. What? You don't name your recreational vehicles? Remind me not to introduce you to our ATVs, Fred and Ethel)

What Else is New

I got a new rug for my office at Not So New Job. It's not just pretty to look at; it's also comfortable to stand on. Or, to lay on, like Boomer Dog did the day he came to visit me at work. 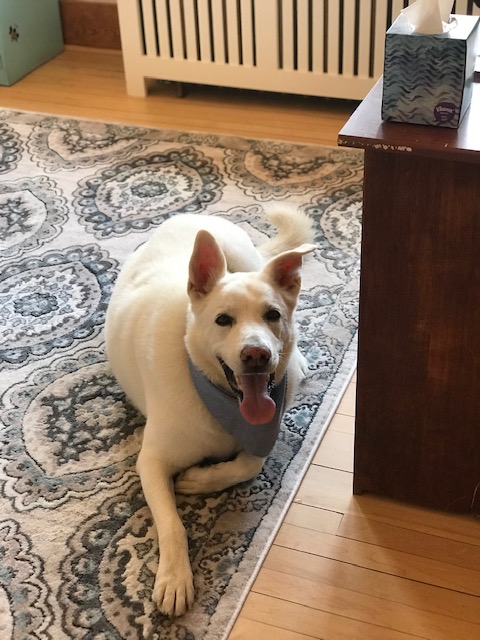 And, that's it for April. See you in May!