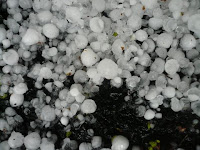 The Hail, You Say?

I was convinced that last night’s baseball game would be called on account of weather when the heavens opened up just an hour and a half prior to the game and unleashed pellet-sized hail upon the earth but; no such luck, the storm moved on and the game commenced on schedule which is really too bad considering that we got our asses pummeled almost as hard as the hail pummeled my petunias which is to say, hard.

(Longest sentence in the history of literature, thank you, thank you very much)

We did have a nice time after the game, though; it was Darren’s tenth birthday and Jana and I handed out cupcakes that we had decorated to resemble baseballs to all the boys. Chris also set up a camp stove and went to work grilling hot dogs for the masses and, by the time we were finished; we had fed just about every member of every family of every kid on the team plus the umpires, the coaches and a handful of random strays from the low-income housing project behind the baseball field.
In just under fifteen minutes.

A swarm of locusts couldn't have been more efficient.

The weather today looks much nicer than yesterday’s and I am hoping to get a few minutes in the sun prior to packing for my trip to the cabin to spend the weekend with my Girls. I’ve been looking forward to this trip for quite some time and would like to be as relaxed as possible going into it; not that I won’t relax while I’m there but, you know what I mean.

I’ve missed the heck out of my roommates and can’t wait to melt into the comfortable chaos that is the hallmark of our group dynamic; we are noisy like the hail minus the rampant destruction.

Um, unless you count that one time….but that is a story for another day.

In other news, I took the children to the library yesterday and the Man-Cub voluntarily signed up for the summer reading program.

A choir of heavenly angels sang.