Gretchen Rossi Has Got Nothing On Me 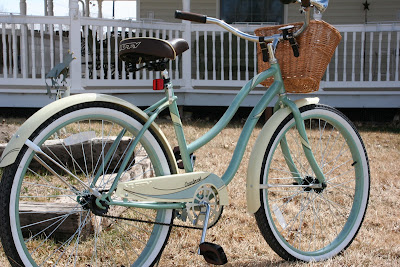 Except for a cup holder. Oh, and, a purse dog but who needs a purse dog when they have a Lulu? And yes, I named my bike. Why? I don’t know, I have an unusual habit of naming my possessions, just ask Gertie, the GPS unit in my car (Short for Gertrude Priscilla Simmons because, if you’re going to name an inanimate object, you might as well go all the way); it’s like a disease with no known cure nor twelve-step program although, wouldn’t it be wicked cool to stand up at a meeting and confess “Hi, my name is Chelle and I assign names to inanimate objects. I haven’t named anything new in three days, however; I also have a really bad habit of assigning an animated character to random people I meet based on their physical appearance. Oh, and I also like to point out which Muppet people most resemble. What? That meeting is down the hall? Well, alrighty, then…”

Say it with me; I digress.

So, back to Lulu, the coolest bike in the Free World. I found her at the Hellmouth and didn’t hesitate for a second before claiming her as my own and rushing her home where I introduced her to her new family.

She got a lukewarm reception from The Teenager, a round of excited applause from the Man-Cub and what can only be described as a bemused smirk from Hugh who, despite his initial reluctance to admit any degree of affection for her beauty, leapt at the opportunity to affix a basket and ooga-ooga horn to her handlebars. 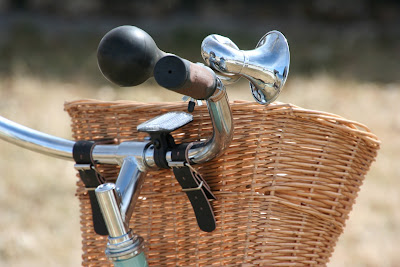 Of course, the weather went to shit the minute I handed over the cash for her purchase and it wasn’t until today that I got a chance to ride her but; I’m pleased to report, that she handles like a dream.

Now, to work on that cup holder…
Posted by Chelle at 9:36 PM