You’ve heard the term Easter/Christmas Catholic, I’m sure. These would be the Catholics who only attend mass on the two most important holidays on the Christian calendar and who go quietly MIA the rest of the year. The good news is; I’m not one of these people. The bad news is; I’m WORSE. Not only did I not go to mass last Christmas, but; I’m not really planning on going this Easter, either.

I feel bad about this, in many ways but; obviously not bad enough to actually get my lazy ass out of the house on Sunday mornings in order to attend church which makes me a terrible Catholic, I know. Indeed, the fact that I feel guilty about missing mass is possibly my one saving grace as a Catholic.

Except, that’s not entirely accurate; I also make a point to observe Lent each year so technically, I have two saving graces. Go me. I'm sure Saint Peter will just throw those golden gates open upon my arrival.

Anyway, as the Catholic among us know; today is the first day of Lent which means that I will begin six weeks of self-flagellation which, for me, comes in the form of giving up chocolate. Lest you scoff at my “sacrifice”, let me assure you; giving up chocolate is a hardship for me. Indeed, by Good Friday, I will be dreaming of eating the heads off chocolate bunnies in my sleep. This is not an easy thing for me to do by any means which, I guess, is the point.

As you know, I also considered giving up Diet Pepsi this year but, following an interesting conversation with my son; decided against it. Instead, I have decided to do something a little different; instead of giving up something else, I’m going to make an effort to give back to my community and to my fellow man by practicing a random act of kindness each day. Now, I try to be kind as a rule but, in this instance, I want to really make an effort to do at least one thing that stands out and, I started this morning by allowing The Teenager to drive to school.

Don’t freak, she actually got her Learner’s permit yesterday so it was perfectly legal if a bit unnerving. In fact, the stress of it caused me to crave a nice chocolate bar which, for obvious reasons, I could not eat which made me terribly sad.

This may possibly be the longest Lenten season, ever. 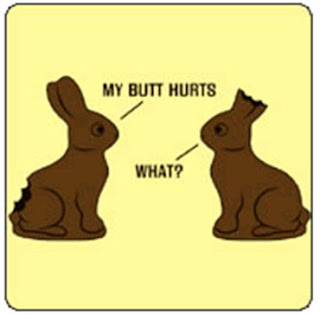