One needs to be very careful when choosing the words one uses to describe things if one wants to prevent hurting the feelings of one's child. For instance, when one says that her son's new haircut looks like a fuzzy ducky's fuzzy bottom, due to the fact that it is, well, fuzzy and puffing up like the downy fuzz of a ducky's bottom; one's son might misconstrue that to mean that his mother thinks his new haircut looks like ass.

I'm speaking hypothetically, of course. Or, not. 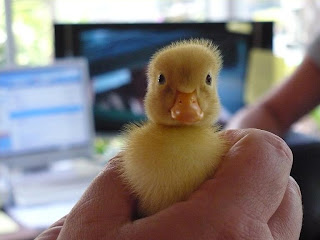 On the bright side, I bet if this duck used just a titch of product in his hair, his mother would tell him his new haircut looks just like the hair of an unruly twelve-year-old-boy. Of course, then the mama duck would be in the doghouse, too.

The moral of this story is: Never compliment your child's new haircut by comparing it to that of a precious baby animal because nothing good can come from it.