Blame It On the Wine

Porch Night was an unparalleled success. And, we define success by the number of times that one of us is laughing so hard that we can't catch our breaths, so, you can assume that it was a pretty fun evening.

Before the night was over, we had made plans to travel to Las Vegas at this time next year, to celebrate the 40th birthday of one of our friends. We also discussed the merits of boob jobs, tummy tucks, margarita slushes, kids who respect their parents, the Real Housewives of every county, homemade peanut butter cups, couch-to-5k programs, and why the correct running shoe will change your life, plus, numerous topics in between.

While we were enjoying ourselves, several of our children were taking advantage of the spread of delicious goodies, including the Man-Cub's little girlfriend (you might remember her from Continuation pictures), who was with her mother. It should be noted that she and the Cub maintained a distance so far from one another as to elicit several of the other moms to ask if they were still "an item". It should also be noted that those inquiries sent both youngsters into a fit of stammering and blushing, the likes of which we had never seen.

Not so awesome was the promise that I made to embark on a running program, with the ultimate goal of running a 5k with the group. As I mentioned in the title of this post, wine might have been to blame.

Anyway, I can now mark another Porch Night off the summer to-do list. I hope to have at least a couple more but I guess I'll have to see how that will work into my schedule, what with all the running I am apparently going to be doing and all. 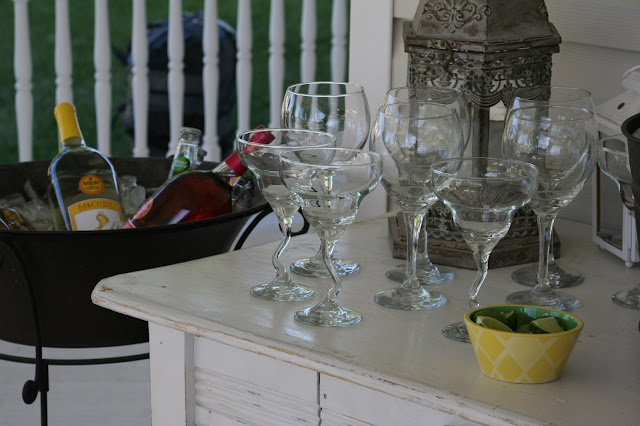