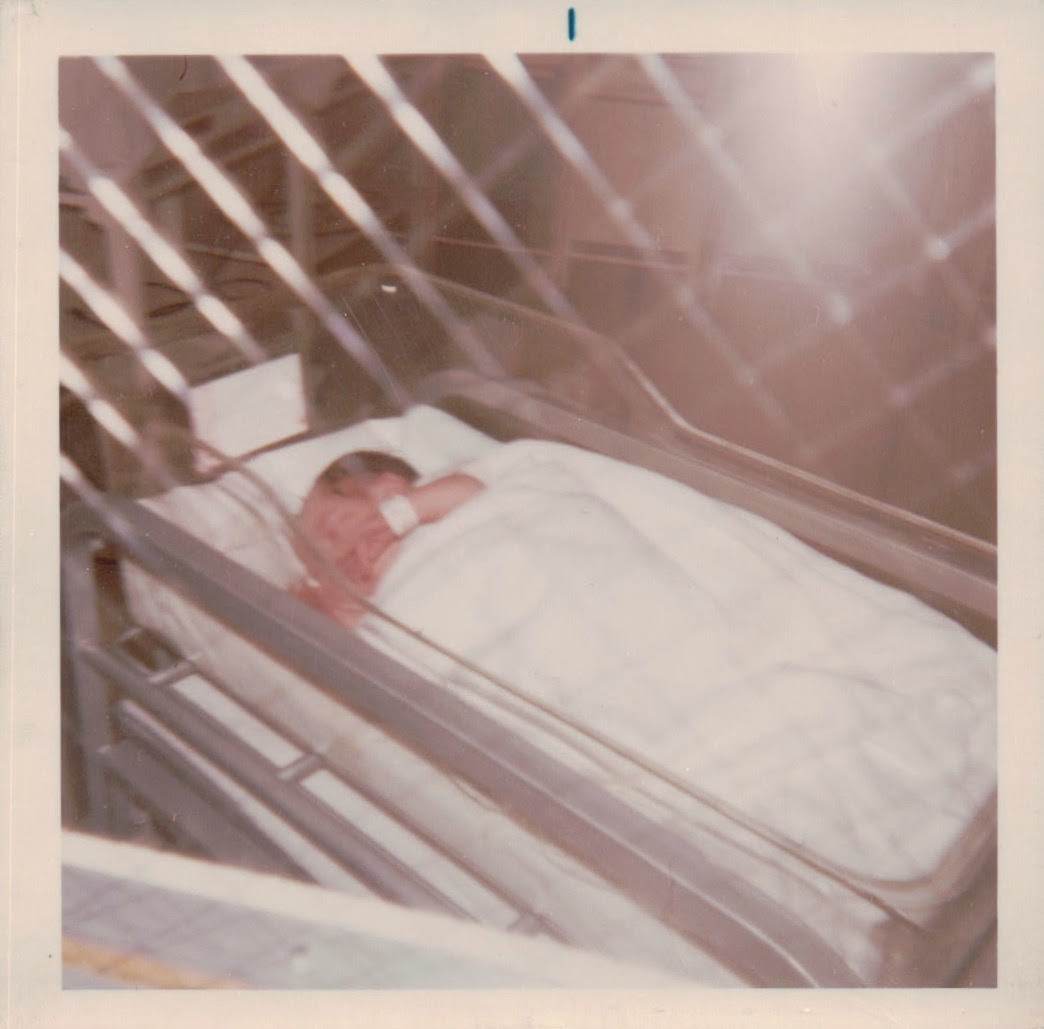 Which, of course, means that today is my birthday. It's been so nice to be with my family to celebrate today, So far, I've blown out the candle on a cinnamon powdered donut (one of my favorites), I've been gifted with presents that include the most awesome vintage Santa (Thank you, Barbie!), circa 1968 (just like me) and another piece to add to my Rankin Bass figurine collection (photos to follow, soon), and, I have the privilege of taking some photos of the people I love.

Later today, my mom, sister, daughter, and I are going antique hunting and we plan to eat dinner as a family in a really nice restaurant in Mount Pilot later this evening. It's going to be a birthday to remember, I think.

Speaking of birthdays to remember, while I've been here in Mayberry, I have been scanning photos from my parents' old albums and it seems apropos to post a couple of them here, today. 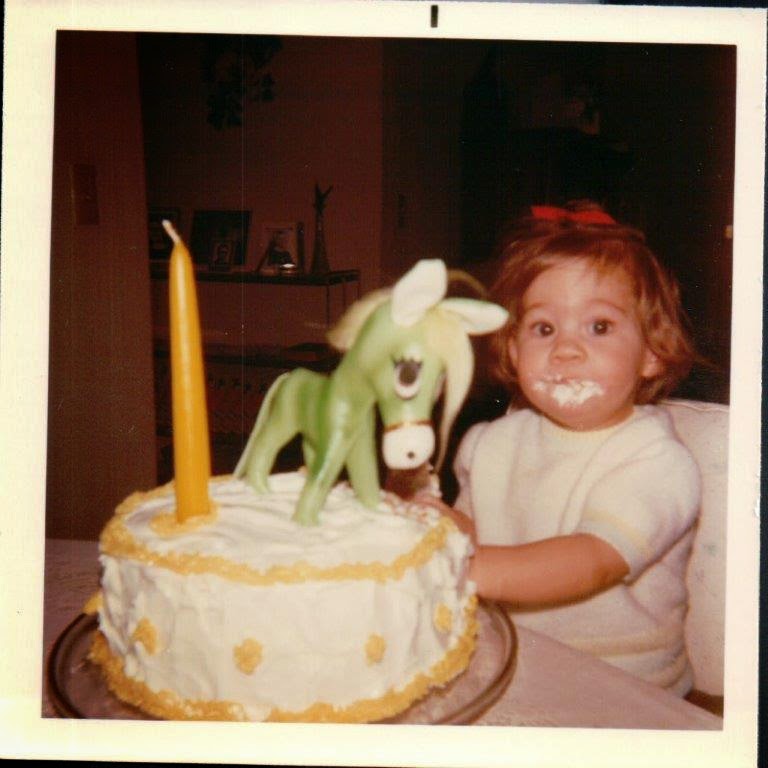 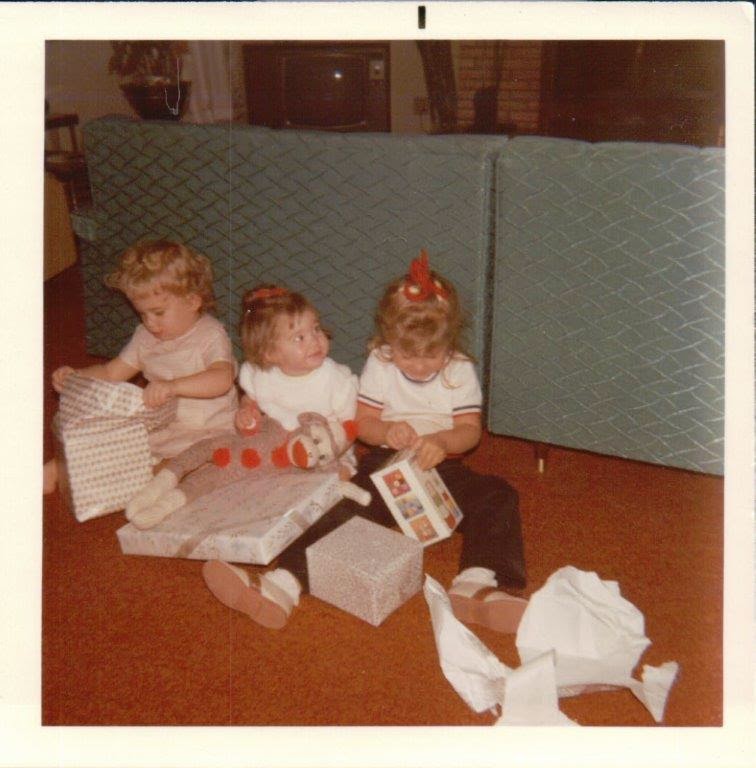 First birthday. Surprisingly, I can remember that stuffed donkey. I must have had him for quite some time. I also got my sock monkey that year; it was a gift made for me by my Grandma Molly and I have it still, today. Granted, the pantyhose used to stuff it are disintegrating to dust, making it precarious to even touch the poor thing, but, I still love it. 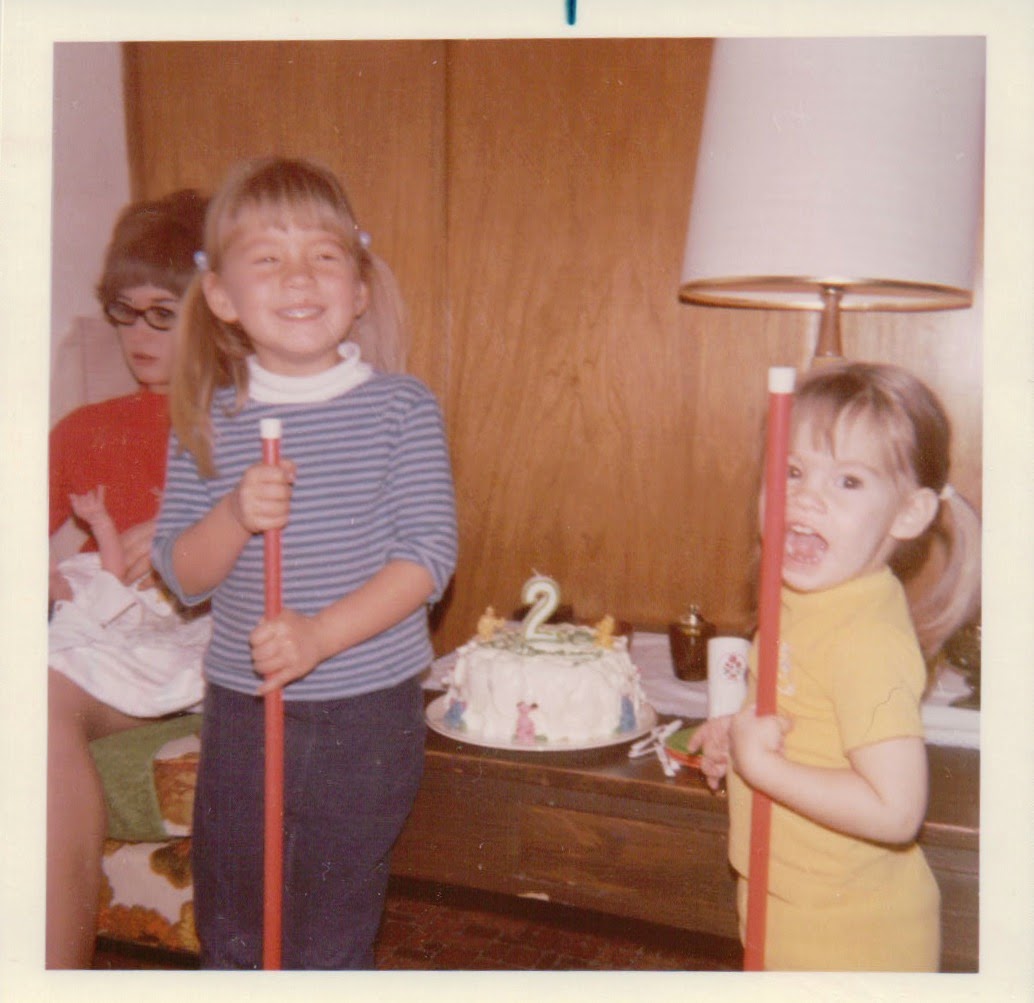 Apparently, the traditional gift for the second birthday is a set of cleaning tools; I believe I most enjoyed the broom. I was a strange child. 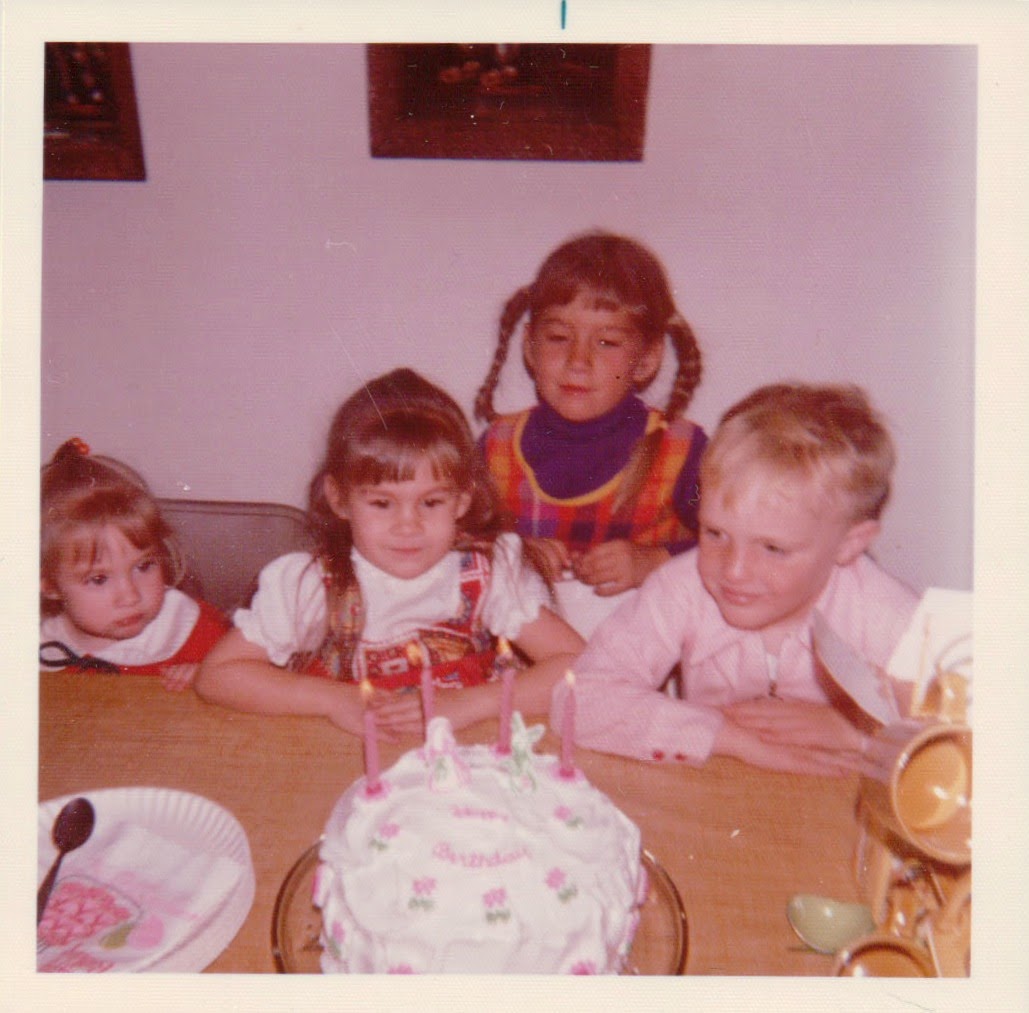 My fourth birthday party apparently consisted of my sisters and one guest, my friend, Clifford. I actually posted this picture on Facebook today, in response to birthday wishes sent from Cliff. He's probably still laughing. 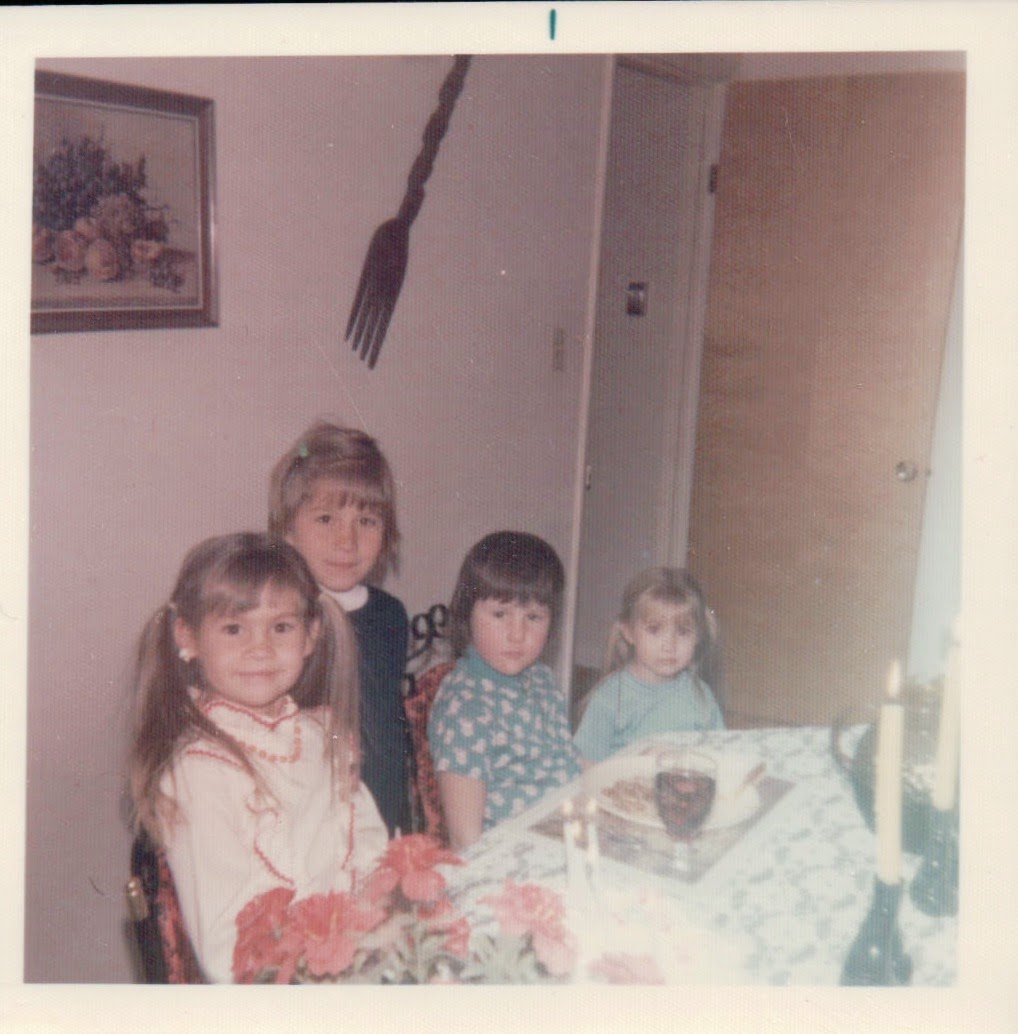 This was my fifth birthday and I remember it quite well because I got to pick anything in the world that I wanted for dinner and my mom promised to serve it on fine china with candlelight. I chose spaghetti, I mean, what's fancier than that? Also, I got a pair of clip-on earrings, which made the whole thing that much more sophisticated. And, lest you begin to think that I only associated with my sisters and boys, the dark haired kid at the table was my neighbor, Nancy. And, despite the unusually androgynous (for the time) haircut, she was, in fact, a girl. 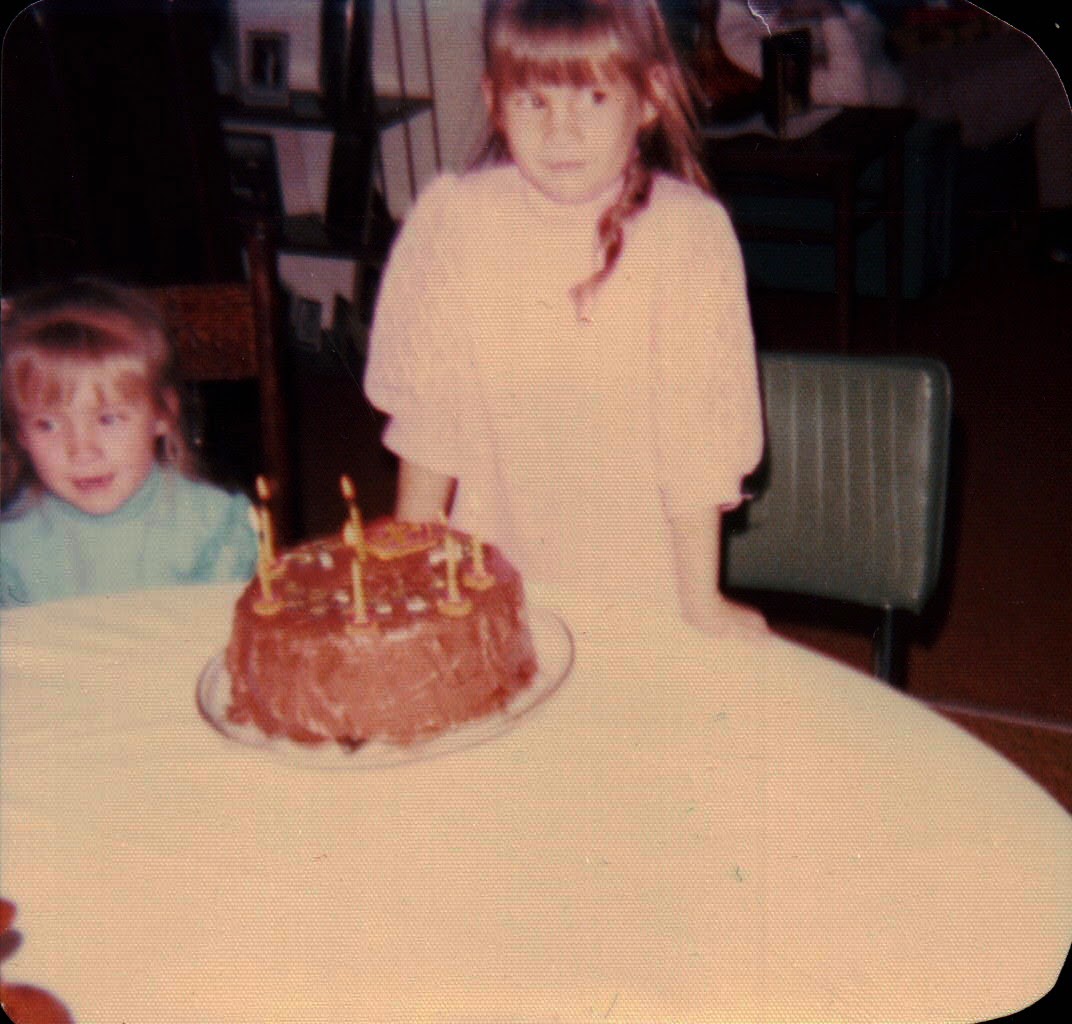 Sixth birthday, and, I'm guessing it was Thanksgiving, because we were at my Grandma Molly's house. I can tell from the blue naugahyde kitchen chair. Also, because I was born on Thanksgiving, and my birthday falls on that day every six years or so. 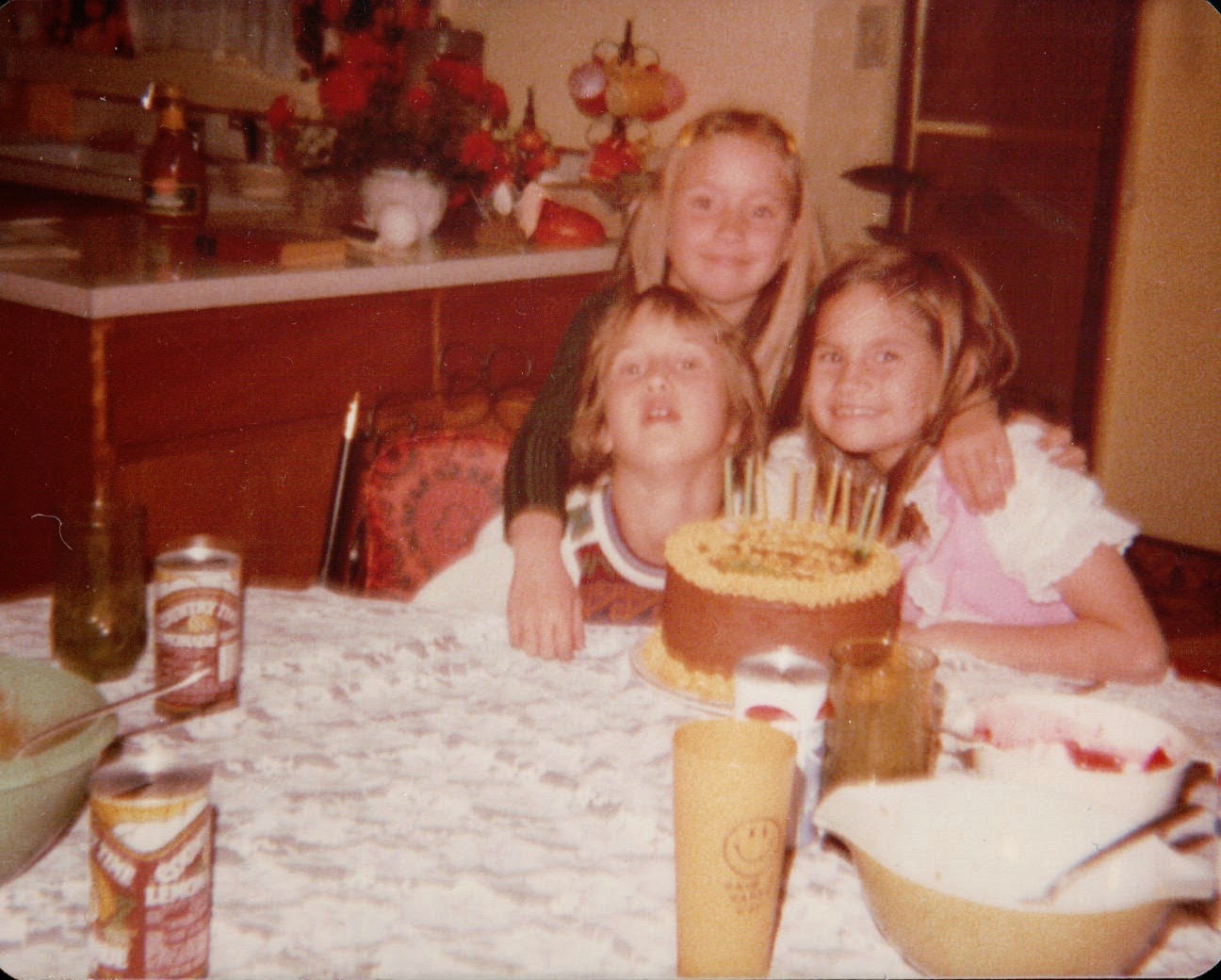 Year eight, and I celebrated with my good friend, Melanie. Special shout-out to the Country Time Lemonade cans on the table; that shit was delicious. 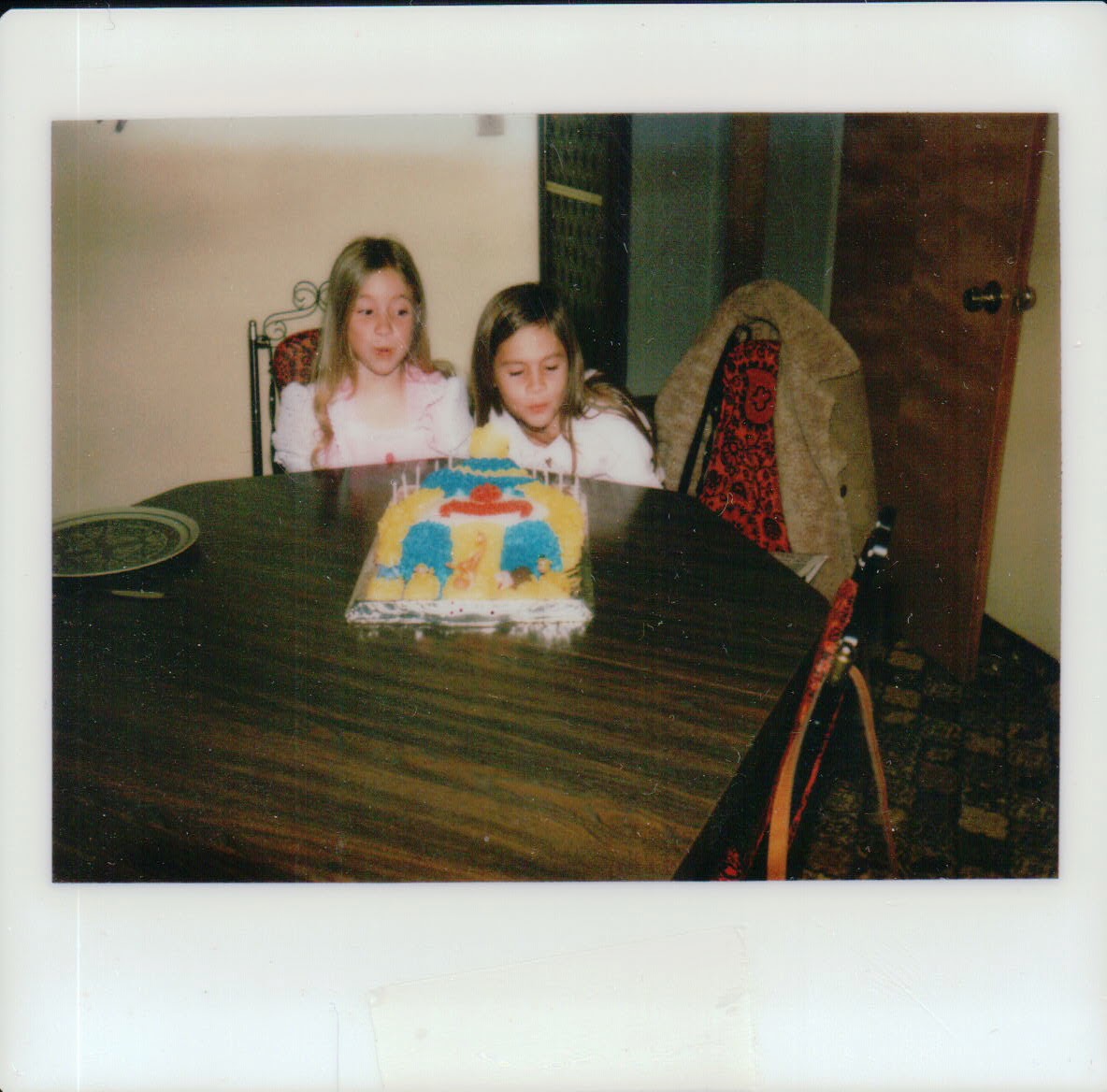 This is the last birthday picture that I found in the albums that I had access to this past week; I believe I was ten that year, and, apparently had no friends with whom to celebrate. But, that's ok; I had my sister, who, if you look back at most of the previous photos, was with me pretty much from the beginning (you can even see her arm in the picture of my second birthday).

She's here today, too. In fact, it was her idea to stick a ginormous candle in a donut for me this morning. She also gave me the vintage Santa that I am now looking forward to using on my front porch. I'm kind of blessed to have had her all these years and I'm really glad I got to spend this birthday with her. 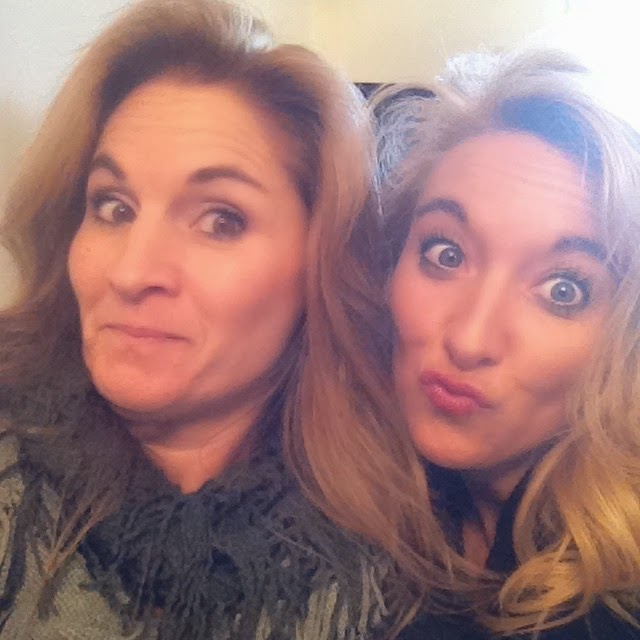 Happy birthday to me!
Posted by Chelle at 11:08 AM