November, already! This year is just speeding by; I hope I'm not missing anything.

So, what's been happening around here? Not a lot. Our first child-free Halloween in 21 years was low-key, and, maybe just a teensy bit depressing. We didn't have nearly as many Trick-or-Treaters as we have had in years past (I blame the school Halloween Carnival; asshole stole my thunder! (I'm just kidding, the school carnival is not an asshole) Also, I just made parenthesis inside parenthesis; is your mind blown?), so my awesome decorations went underappreciated this year. I guess there is always next year.

Anyhoodle, I spent the past day and a half putting the decorations back into storage and decking the house in Thanksgiving decorations. We are hosting dinner this year, and, as I mentioned in a previous post, Mikey and his mom will be joining us, along with Oscar, Emily, Queen B, my mom, Queen B's special guy friend, and her boss. It's going to be a full house and I want to make it as homey as possible. Also, Mikey and his mom recently learned that Mikey's sister and her husband are expecting their first baby, so, we really have reason to be thankful and to celebrate (it was a long road to pregnancy for Mikey's sister).

I'll post pictures of the decorations tomorrow, once I've made the finishing touches; I picked up a few things on clearance at The Hellmouth today and I need to decide where they go.

Speaking of The Hellmouth; there really is a reason that I liken it to the portal to Hell, and, two recent shopping trips brought home that point quite clearly: Last Saturday, while perusing the holiday aisles, I realized that I was in the beginning stages of a migraine. I immediately inhaled my meds, abandoned my cart, and fled for my car, where I spent the next hour meditating in the back seat, finally dozing off for long enough to get control of the headache. For the record? While there are far worse places the headache could have happened, the parking lot of The Hellmouth is not very pleasant. Then, today, it took me three tries before I found a cart that didn't have a dead front wheel. I don't know about you, but, dying a slow death while endlessly navigating The Hellmouth by making only left turns is not the way I'm going out. Get your shit together, Hellmouth.

In news not related to The Hellmouth, I have another new addition to the guests currently enjoying the bird buffet outside the kitchen window. 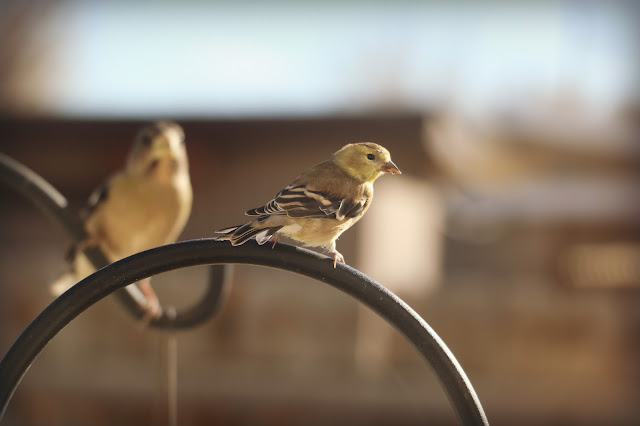 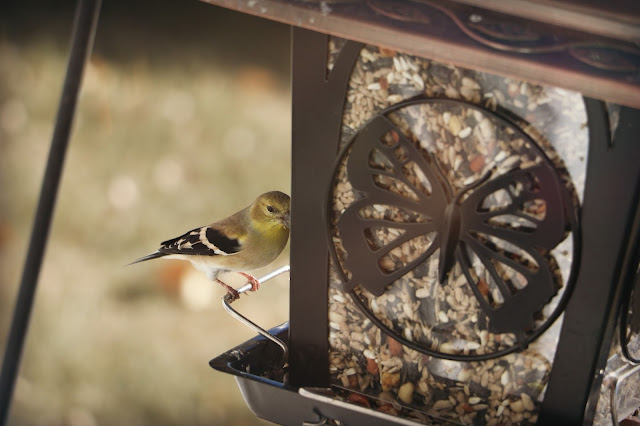 As usual, I have no idea what they are, but, I want to call them chickadees, for some reason. I also want to sing in a high falsetto and have the little guys land on my outstretched fingers while I wait for my prince to come, but that is neither here nor there.

And, that about covers life lately here in Petticoat Junction. The excitement is almost too much to comprehend, I know.