Welp, there goes another month. I had plans, y'all! You know what they say about best laid plans, right? They say...well, I'm not entirely certain what they say but I think it's akin to best intentions paving the road to hell and all that. Which, is to say; my plans got blown to hell due to unforeseen circumstances, including a nasty bout of  Covid that Mom had despite being completely vaccinated (she was one of those "rare" breakthrough cases that mainstream media wants us to ignore).

She spent a few days in the hospital but is home now, which, is where I am now typing this, having arrived yesterday to spend a few days playing nurse. I couldn't, however, let my new duties keep me from linking with Sheaffer and Shay for this month's What's Up Wednesday (any degree of normality is welcome in these strange times).

Hugh is taking a little break from HelloFresh because his officiating schedule is starting to get crazy busy, so; I've had to reawaken my inner chef. Thus far, that has resulted in a pot of chili, a butternut squash lasagna, and not much else (baby steps!). We did, however, start the month off with an anniversary dinner at a super swanky restaurant, where we enjoyed the absolute tastiest appetizers: peppadew peppers stuffed with goat cheese, wrapped in prosciutto and baked until golden and creamy, then finished with a drizzle of balsamic reduction. My mouth waters just thinking about them. 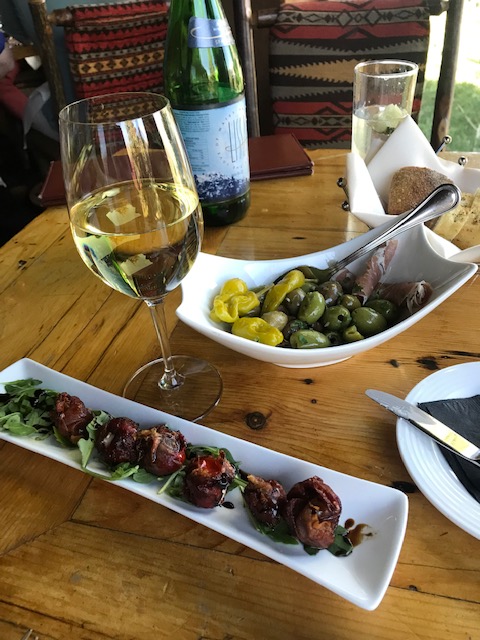 We also had heirloom tomato and burrata salads, which were amazing, and fresh baked bread with salted butter that was to die for. 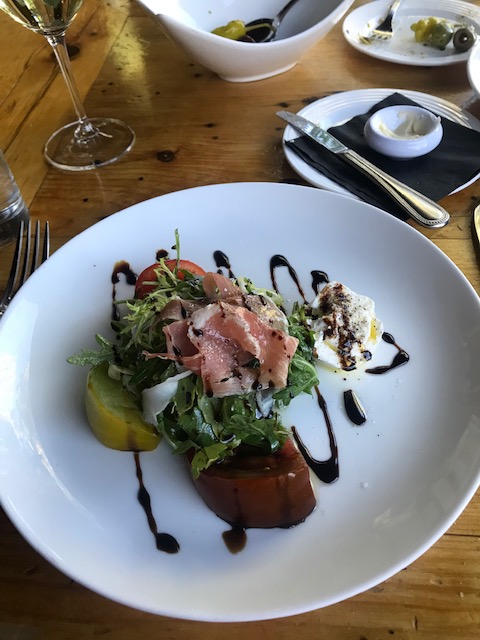 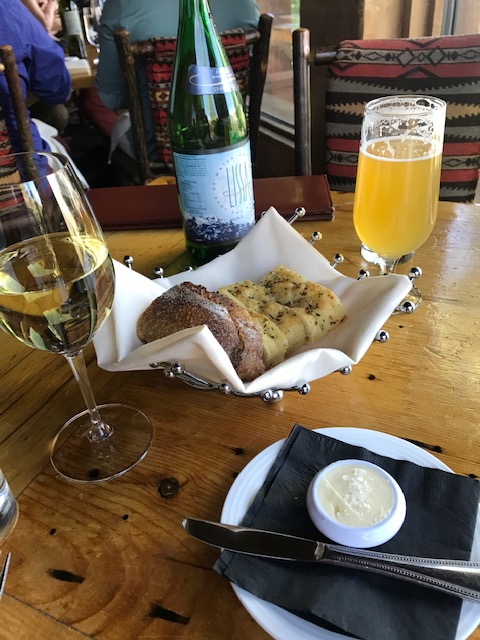 Our entrees, while perfectly fine, were nothing to write home about. However, the cheesecake that we were served for dessert made up for that, nicely. 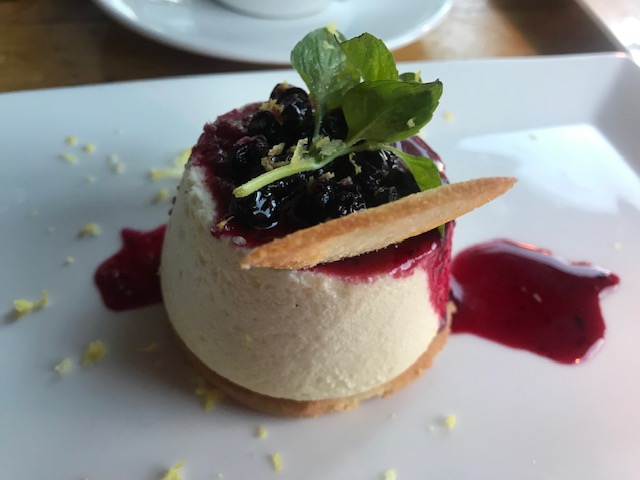 Since I've been home taking care of Mom, I've been remembering my childhood and how well my parents took care of me and my sisters. It's made me miss my Dad even more than I normally miss him, and, with the anniversary of his death looming on the horizon; the reminiscing has been bittersweet. 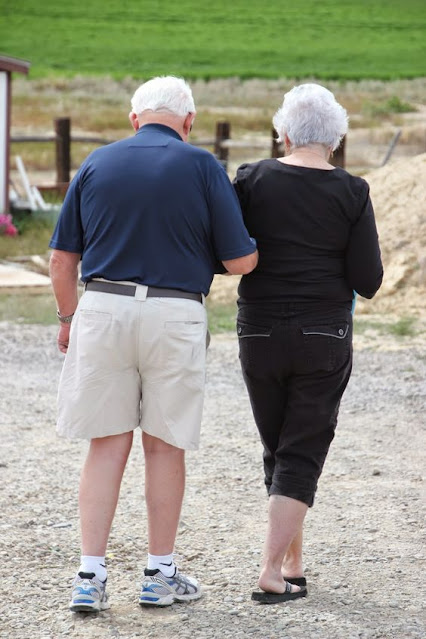 The Man-Cub turned 23 on the 23rd, making it his Golden Birthday. I helped him celebrate by putting together a dinosaur-themed birthday box that included tickets for him and his girlfriend to take the Jurassic Park Tour at Kualoa Park. The Cub's girlfriend and I kept it a secret right up until he opened the box, which was an accomplishment. The tour was on the 25th, and the kids made sure to send us a ton of pictures and videos. I love that they had a good time! 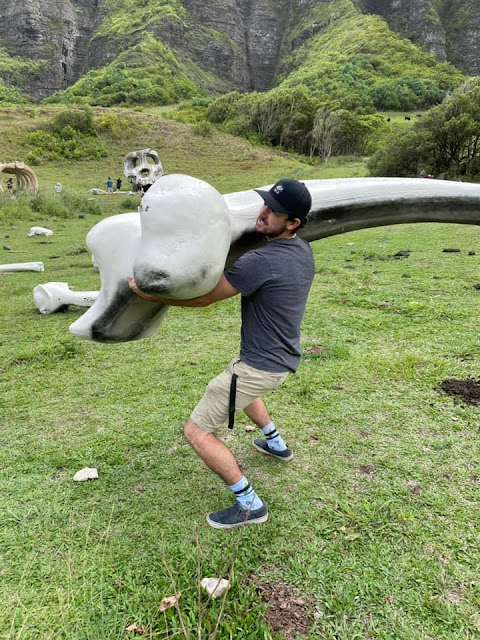 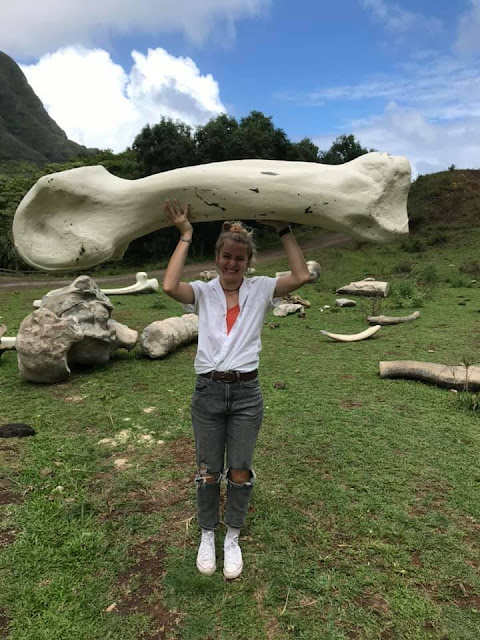 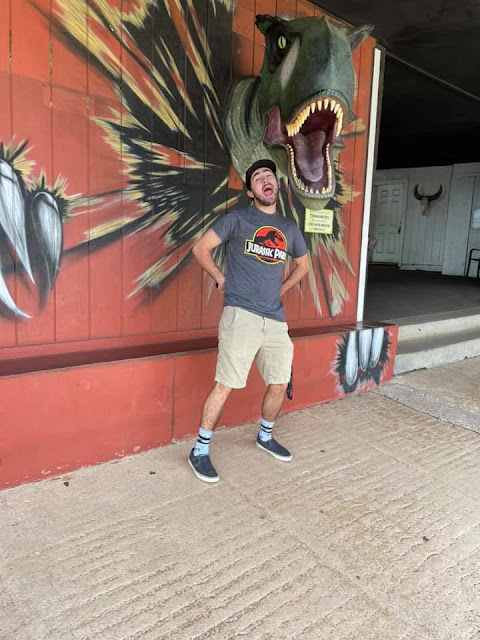 I recently discovered the joy of reflexology. There is an amazing massage therapist in Hooterville who specializes in both reflexology and ashiatsu massage and she has worked on my feet three times now. I love her. I want to put her in my pocket and take her home with me.

In other self-care news; I visited the local day spa for a facial this month and it was heavenly. I'm planning to go back again next month. 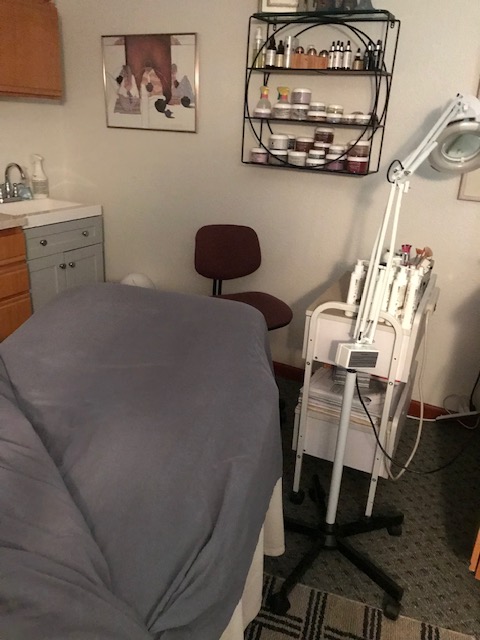 On a less selfish note; I've been brainstorming with my staff for ideas to upgrade our virtual 5K and we hit upon a winner: Doggie Bags for folks who want to take their dogs along on their run. The bag consists of a custom bandanna and an organic dog treat and is added onto an individual's registration for an additional $5. So far, they are a hit! In fact, we've had people who register simply to get the Doggie Bag. People are strange. 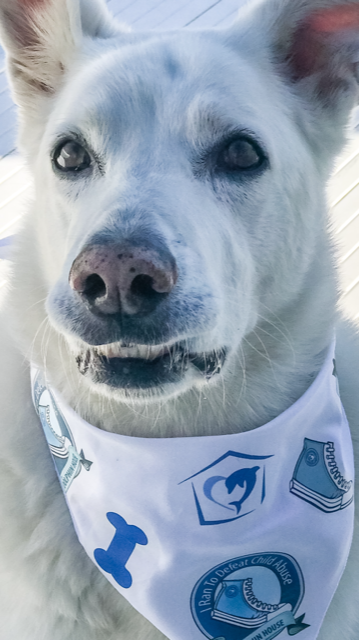 My staff and I busted our asses putting on a Barn Dance for supporters of the organization that we work for. The event netted close to $30,000, so I'm not complaining. Plus, when I wasn't running around making sure things were going smoothly; I got to dance with Hugh, who volunteered his services directing traffic for the event. The newlyweds also volunteered, and several friends attended the dance, so it was split 60/40 labor vs fun. 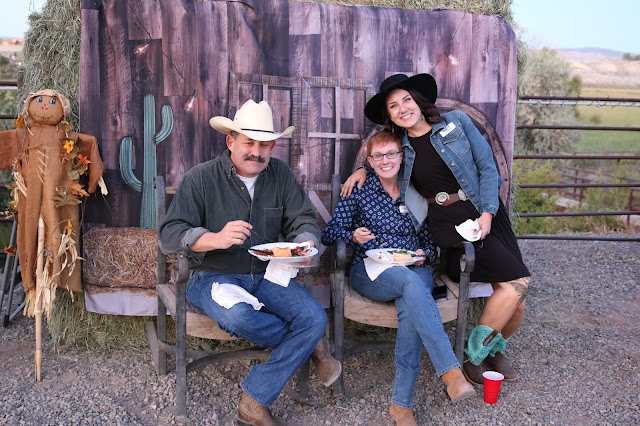 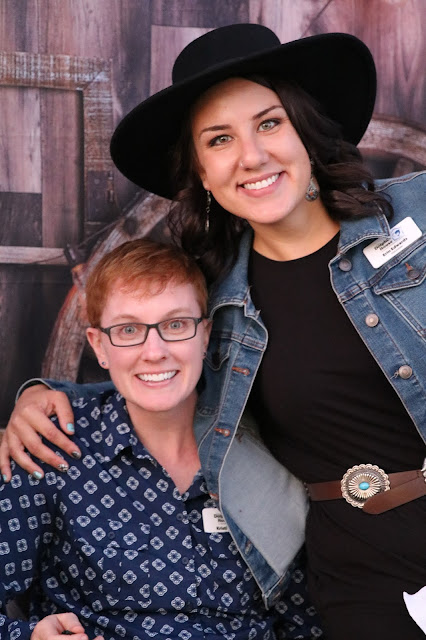 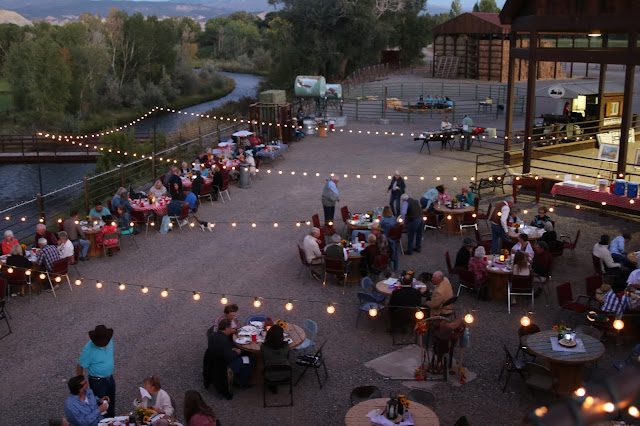 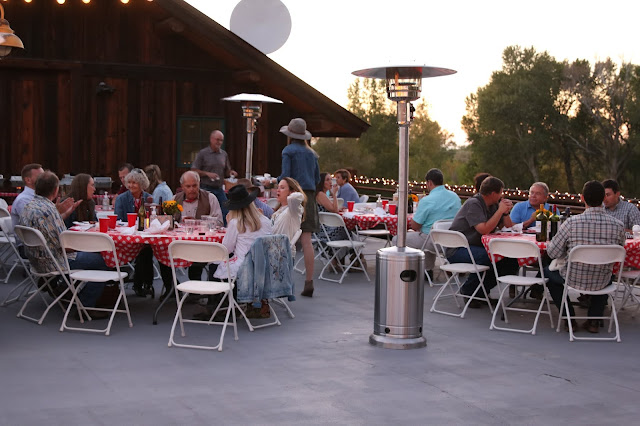 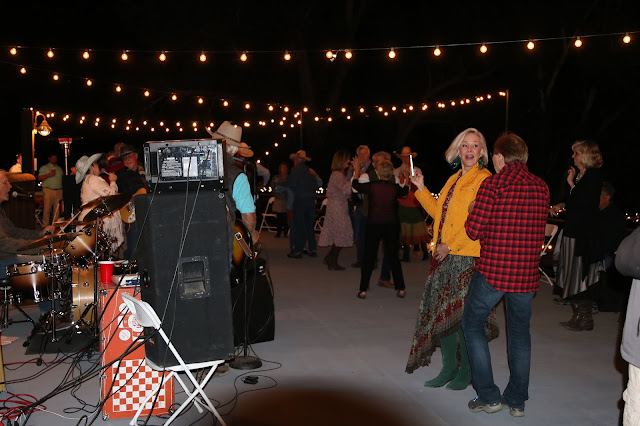 I have to close out a federal grant at Not So New Job. It is a grant that was extended three different times and one that has not been utilized during my tenure (Covid scuttled the services specified in the grant). So, a two-year grant morphed into a five-year grant that was managed by two Executive Directors and two Interim-Directors and I am now responsible for making sure that it was all spent appropriately. Good times.

I am really, really trying to get excited about our upcoming trip to Hawaii for the Man-Cub's graduation. What's holding me back? Oh, just this little thing called a worldwide pandemic. I am scared to death that the stupid virus will somehow scuttle our (very exciting and very expensive) travel plans. I'm not usually one to borrow trouble, but...

Anyhoodle, I am booking the zipline at Kualoa Ranch for Hugh, the kids, and myself as well as a Pearl Harbor tour for Hugh, Oscar, Emily, the Cub, his girlfriend, and Mikey (Mom, the girls, and I bowed out). I am also booking a caterer for the graduation party, a photographer for family photos, and a luau for the entire group.

Hugh and I got a newer, smarter TV, which has enabled us to watch Hulu, Netflix, and Amazon Prime with far less interruption than did our older, dumber TV. Since then, I binge-watched the Amazon Lularoe documentary, which I found fascinating. I have friends who were briefly sucked into the Cult of Ugly Leggings, so I was intrigued to learn about the scandal. 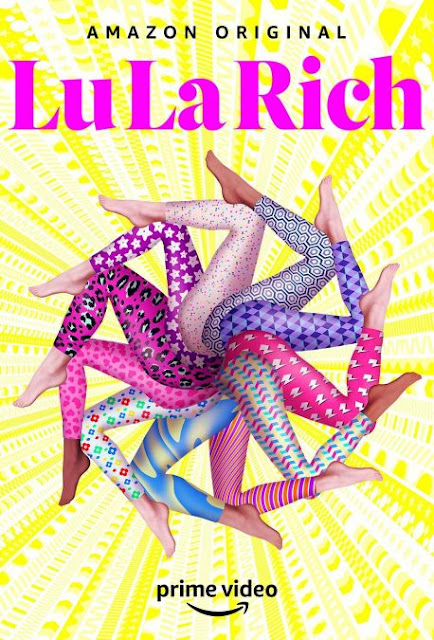 I also watched Nine Perfect Strangers on Hulu. It strays just a titch from the book, but features a really great cast. In fact, I would say I've enjoyed the series more than I enjoyed the book. 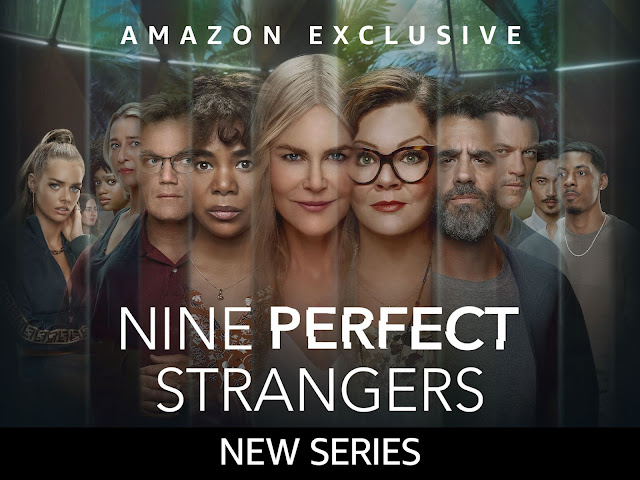 I'm currently reading the first book in the Hot Flash Club series. It's been slow going, but not because the book is bad; I've just been super busy and dealing with hot flashes of my own. 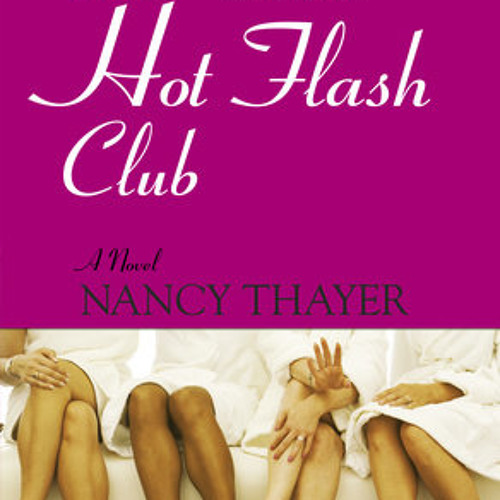 The pump-whooosh sound made by Mom's oxygen concentrating machine. She will be on oxygen for at least a month. It reminds me of the night before my wedding; my grandmother from Texas was staying in the guest room and her oxygen machine, combined with my nerves, kept me up for most of the night.

The only unique item of clothing that I have worn recently was this pair of cowboy boots that I picked up for the Barn Dance that I mentioned earlier. 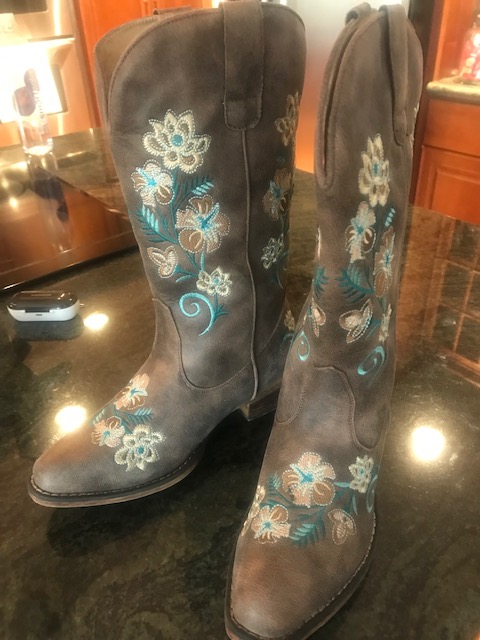 I wore them with a black dress, denim shirt, silver and turquoise belt and a whole shit-ton of turquoise jewelry. It's not a look I choose often, but I have to admit; it looked good on me. My feet were killing me by the end of the evening, but fashion is painful. Ask any model.

I'm throwing the first of what I'm hoping will become an annual event: The Broomstick Bash! It's basically a witch-themed Porch Night, but with costumes and brooms and bubbling cauldrons and I can't wait! Even with the craziness of the past week, I still managed to get the porch decorated for the party, with the exception of just a few final touches. I've also got the menu worked out in my head and my costume picked out; it's going to be a fun one!

So many things! Pumpkin carving, corn maze navigating, skeleton posing, cider drinking, and, the end of fundraising season, just to name a few. My idea for the skeletons this year is, by far, the least labor-intensive in recent memory; Hugh is thrilled. 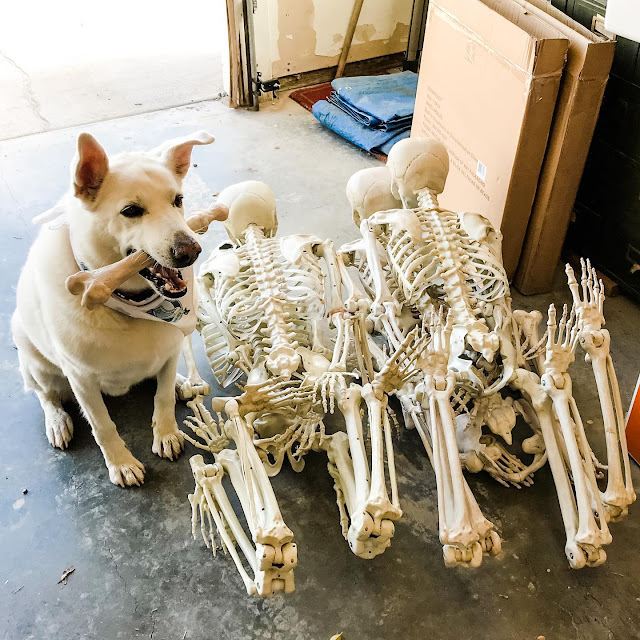 What Else is New

My doctor has me on a new thyroid medicine that I am hoping will address the exhaustion that I seem to experience around 3:00, everyday. I've been on it for about a week and can't say for sure if it's working, but, I have managed to stay upright for the past few days, so, fingers crossed.