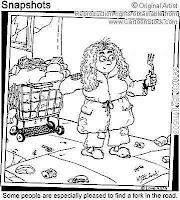 In which I Totally Insult the Domicile Challenged

A few weeks ago, Hugh signed us up for an online postage account wherein we will print our own postage labels, saving money and unnecessary time in line at the post office. In addition, he ordered a large quantity of priority mail boxes to have on hand at the store.

No big deal, right? Right except, as I mentioned, I was without a vehicle and, the packages of boxes, while not being extremely heavy, were both large and bulky. When I mentioned that I was on foot, the Post Master graciously offered me the use of a cart, provided I return it the same day.

I accepted the offer which is how I came to be pushing a shopping cart full of cardboard down Main Street in Petticoat Junction yesterday.

I looked just like a homeless bag lady. That is, if the bag ladies in your neighborhood carry a (faux)Burberry Bag, wear Seven for All Mankind capris and sport a mouthful of thier own teeth.

The cart was actually really nice-lined with heavy canvas and featuring four wheels that actually rolled together in perfect synchronization-unlike the majority of carts I generally utilize in the supermarket. So, the knowledge that I was steering the Cadillac of homeless carts made me feel better about the whole looking–like-a-homeless-person-pushing-her-cart-down-Main-Street-while-people-pointed-thing.

And, they did. They pointed. There may have been laughter. What is the matter with people?

Anyway, at one point in my journey, I came to a steep hill-the same hill the Town Activity Department uses for the annual Downhill Derby and, I would be lying if I said that it never even crossed my mind to get in the cart and sail down that hill. I thought better of it, however, due to the fact that the cart lacked both a braking system and any type of steering apparatus and, you know, I was sober.

It would have been fun, though, and, if the whole town is going to gossip about my new ride anyway; I should have at least gotten some fun out of it.