Ghosts of Christmas Cards Past

While trying to come up with some inspiration for our Christmas correspondence this year, I am looking back over our past year’s cards. I am in awe of how much the kids have grown and changed. I am also reminded of how much I generally enjoy coming up with new and interesting ways to embarrass my children now and for future generations; I'm thinking:

“Why, hello Possible Future Significant Other of My Grown Child, would you care to see our photo albums? The Teenager/Man-Cub was such a beautiful child! What’s that you say Teenager/Man-Cub? The pictures are embarrassing? Pee-shaw! Let’s look!”

They might require years of therapy on down the road but, I’ll be able to say that I was entertained.

So, let’s see, well, this isn’t embarrassing at all; this is Hugh and my first holiday card as a married couple. Nope, not at all embarrassing, although, the weeping I do for that waistline might be, you know, just a tad. 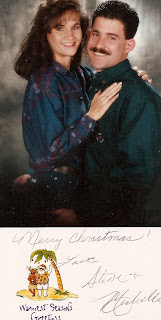 Ah, here we go, The Teenager as an only child prior to the birth of the Man-Cub. Still not embarrassing, adorable! The zip-lock barrett on her head is simply fabulous and the fact that our dog looks somewhat drugged merely adds to the uniqueness of the card. For the record, he wasn't. Drugged, I mean.

Also adorable, the Man-Cub’s first family card; in a pumpkin patch because, nothing says Christmas like pumpkins! Yeah, I’m not sure about that, either but, hey! Sunglasses! 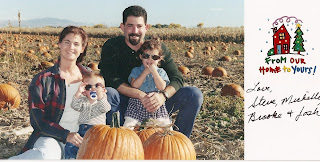 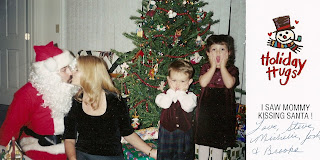 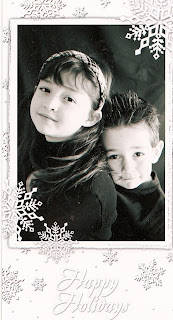 Ok, maybe a little bit embarrassing but, it’s not like they are lying on a bearskin rug wearing nothing but a Santa hat (those pictures never quite made it to a card, I do have them, however, if you would like to see them Possible Future Significant Other of My Grown Child!).

Ah, classic documentation of sibling interaction. Sometimes, we even let them take the gloves off. 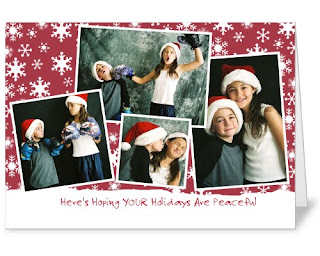 Hands down, the kids’ favorite card, ever. Probably because they loved the pajamas. Now, if they are still wearing said pajamas when old enough to be dating their Possible Future Significant Other, I take neither credit nor blame and, once again, therapy. 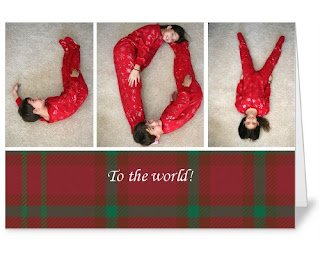 The Man-Cub declared the pole in this picture dis-gusting! Except, it sounded more like dis-guthting! at the time. 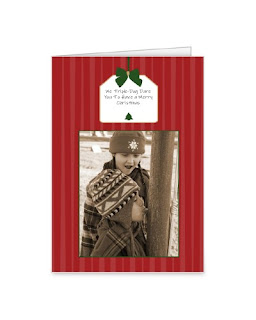 And, would you look at that; I suddenly have the inspiration to finish this year’s card and the newsletter that goes with it; this is no small feat considering my recent ennui concerning the holidays.

*This miracle sponsored by People Who Like to Embarass Their Children
Posted by Chelle at 6:48 PM