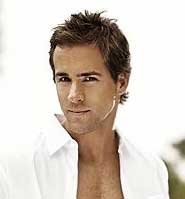 People Magazine just named Ryan Reynolds as the Sexiest Man Alive, saving me from having to boycott the magazine's very existence as would have been the case had they tried to shove that fickle Brad Pitt down the throats of the American public.

People Magazine, I applaud you and, not just because Ryan Reynolds is the new Green Lantern, which makes my nerdy little geek heart swell to three times it's normal size.

Although, there is that.