Are You Ready for Some Football?!

Well, I am as long as it involves these kids... 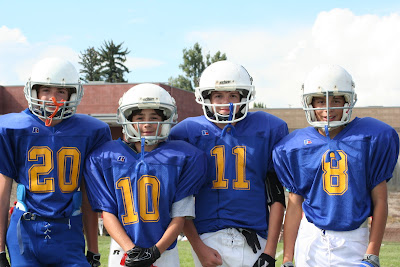 ...and, yes, my son is the smallest kid in the group. He is not, however, the smallest kid on the team, in fact, he actually falls in the middle of the group as far as size goes; his closest friends just happen to be giants. And, in the case of two-out-of the-three of them, a full year older.

There's hope is what I'm saying. Also, puberty? You can have your way with my son any day now, as long as you gift him with some additional height and, please, fortheloveofgod, some bulk. Really, I'll deal with the facial hair and the stinky armpits if you will just please ignite in him a sudden craving for steak and potatoes. Or, protein shakes, whatever.

Anyhoodle, the boys played a good game despite losing 20-14 in the last 36 seconds. This brings their record to 1-1 with many, many games to come. Not that I'm counting or anything.

Unfortunately, of those games (that I'm obviously not counting); only three are home games. Three. I'm not sure what scheduling genius came up with that plan but my gasoline budget would like to kick him squarely in the groin.

On the other hand, if it weren't for traveling to yesterday's game, we would have missed the chance to see the school bus carrying our Middle School girls' volleyball team as it drove by on it's way to a game in a town just beyond the town in which we were playing. Had we missed that; we would have missed seeing the girls waving out of the windows, whistling at our boys and cheering them on to a touchdown and I would have hated to miss that because it was kind of awesome. Also, kudos to that bus driver for actually slowing down so the girls could see the touchdown. 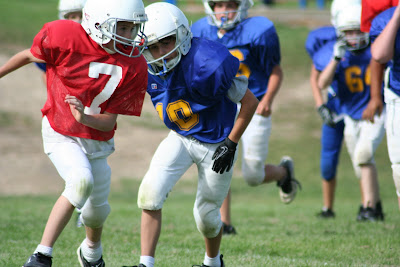 I should mention that, on that bus was the girl on whom the Man-Cub has a wicked crush, so; he was especially happy to see it go by although; I can't imagine why.... 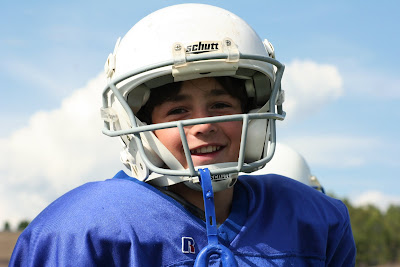 Puberty? I take back what I said; you cannot have your way with my son, after all.
Posted by Chelle at 9:49 AM