It's Homecoming week here in Petticoat Junction, also known as Spirit! Week and you can bet The Teenager is raring to go. Today, she donned board shorts, a rash guard and a colorful lei in honor of Beach Day 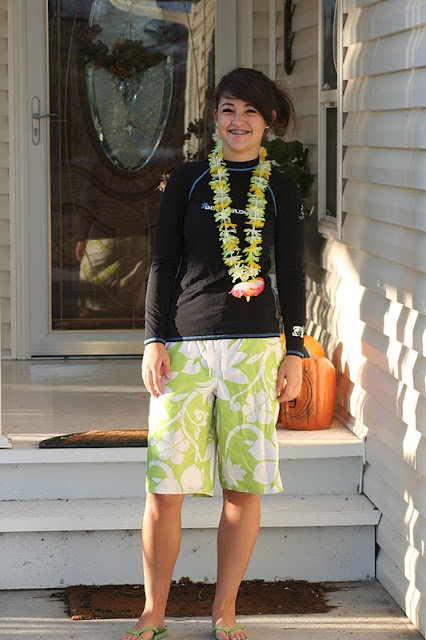 She looked precious and was just so excited; her delight almost made it possible for me to forgive her when she asked if she could raid my closet for tomorrow's theme which is Fashion Disaster Day. Almost.

The rest of Spirit! Week will see the kids dressed as twins for Twin Day (duh) as well as in assigned colors for Color Wars Day. The Teenager's class drew the short stick and will be wearing pink again this year, which makes for two years in a row. The Teenager is now threatening a boycott of the color if the class draws it again next year and I have volunteered to purchase logo tees declaring Pink? WTH?! in the event that they manage to make a clean sweep of it by drawing the color again as Seniors, I mean, what are the odds (Ha! Jinx!) Finally, on Friday, the kids will outfit themselves in traditional blue and gold for the parade and spirit assembly prior to the football game.

Speaking of football, The Teenager will be playing in the Powderpuff game on Tuesday night despite the fact that she really, really doesn't want to have to actually  touch the ball,  just like last year.

I can't blame her, really, I mean, what if she takes a ball to the face and ends up bruised for the Homecoming dance? That would be terrible, especially since she has a date for the dance. You heard me. A date. Apparently, The Crush wasn't nearly as intimidated by Hugh as we had hoped and he has invited The Teenager to accompany him to the dance. The teenager is, as you might have guessed, thrilled. And, I got to order the first Homecoming boutonniere that I have ever ordered in my life, having given that chore honor to my own mother several decades ago.

Please do feel free to burst into a rousing rendition of The Circle of Life.

Speaking of which, in addition to all the Homecoming festivities, the Man-Cub is having a birthday this week (Thirteen. Kill me. Kill me, now). He's already requested a sleep-over with four or five of his friends and, I'm completely fine with that because three-out-of-the-five boys who will be in attendance have massive school-boy crushes on The Teenager and I'm fairly certain they will give The Crush a tougher time than either Hugh or I ever dreamed of and; I'm going to find that quite entertaining.

Homecoming is fun for everyone!
Posted by Chelle at 8:40 AM