We were fortunate to have my parents visit this weekend; Dad is just a few weeks past shoulder surgery and I am amazed at how well he is doing. Actually, considering that he also had surgery on his neck back in August; I am doubly amazed and; was really happy to have them here.

They made the trip primarily to watch the Man-Cub play basketball, which he did on Thursday and Saturday but, while they were here, we also attended a jewelry store open house (well, Mom did, Dad's not so much into the jewelry open houses, who knew?) and my woman's club's annual holiday festival.

The Cub's team won three-out-of-four games and, aside from my Dad wanting to thump the coach on the head for not playing his grandson more; I think he and Mom had a good time. Plus, they got to see the Fearsome Foursome in action and, look at that; I finally got them all to hold still for a picture. 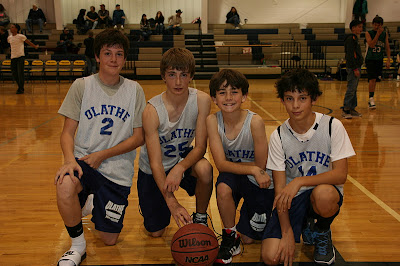 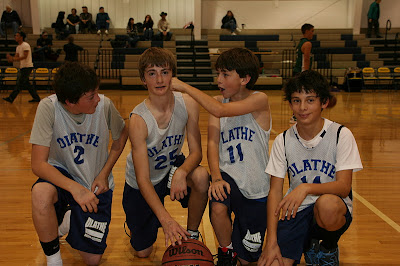 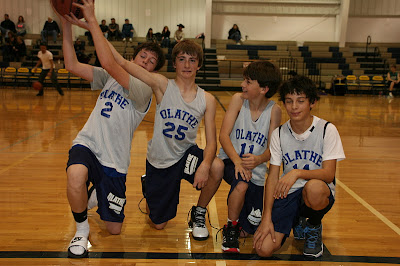 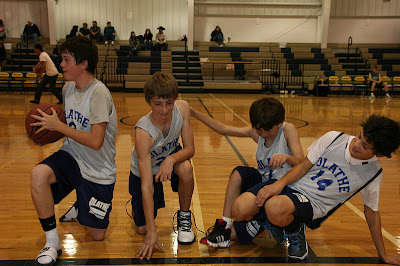 Friday night's holiday festival went well; it was the first time my parents had been here to attend so, I was hoping for a good turnout and the community did not disappoint. Unfortunately, my centerpiece was not the top-grossing centerpiece this year which is fine with me since my mother was the winning bidder on it despite my protestations that I could have made her the same centerpiece for far less than she spent on it.

Anyway, it was a nice visit and, as always, we were sorry to see them go. In an effort to salve our disappointment, The Teenager and I accompanied Jana and Kaley to the matinee showing of Breaking Dawn, yesterday. The movie followed the book fairly well and the scenes that you would expect to be gory certainly did not disappoint (as an aside, remind me never to give birth to a half-vampire demon spawn; that shit looks painful). Now, of course, we have to wait an entire year for Part Two to finish off the saga.

Hey, at least I have the rush to Christmas to occupy my time and, according to everything I am seeing on television, the rush is definitely on. Time to break out the cookie sheets and sprinkles.

Darn sweet tooth.
Posted by Chelle at 8:09 AM