I Don't Sweat, I Glow

It is a well-known fact in these parts that; once Stampede has passed, winter immediately follows. I'm thinking Mother Nature failed to get the memo this year because, Stampede ended days ago and, yet, it is HOT.

The high today was 89° which felt more like 189° because of a pressure front that is sitting directly over Petticoat Junction, threatening rain but never quite delivering, and; if I sweat much more, I am likely to float away on a river of my own bodily secretions (Awesome visual, no?).

I'm not really complaining, mind you; I actually prefer to be hot rather than cold, but, still, pit-stains are attractive on no one, I don't care who you are.

Also not complaining about the heat would be my garden, which has produced a massive crop of green beans, cucumbers, zucchini, tomatoes, bell peppers, and jalapenos in recent days. Since I am still drinking S(ass)y Water, the cucumbers are somewhat more welcome than they might have been in years past and I am always up for tomatoes, so; I am enjoying the bounty. I would, however, like to have seen a few more beets, as; that harvest is looking rather puny compared to the last two summer's production.

Anyway, we are enjoying the vegetables. Oh, except for the Cub, who is currently enjoying the junk food buffet provided for him by The Pod People. If Facebook photos are any indication, the couple (formerly known as my parents) are also encouraging the Cub to pursue dangerous hobbies that may-or may not-involve the handling of wild reptiles. 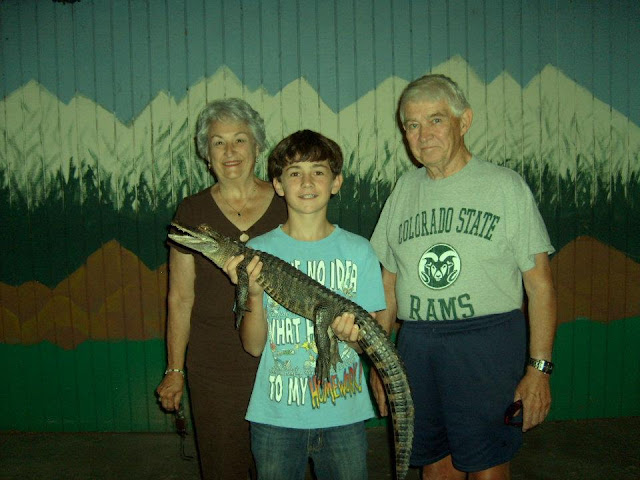 And, while I can't prove it; I suspect that he hasn't changed his shirt since I left him in Mayberry on Monday.

But, hey! No visible pit-stains, so; he's slightly ahead of his mother when it comes to personal hygiene.
Posted by Chelle at 6:15 PM