The More Things Change, The More They Stay the Same

Despite the fact that my dad is no longer a member of the Stampede Committee, we managed to conduct our weekend in much the same manner as we always have; yes, it cost a bit more, but, I can honestly say that the kids lacked none of the traditional experience.

Actually, in addition to all the usual activities; The Teenager got to experience some new things, like, the concert and meet-and-greet with Hunter Hayes... 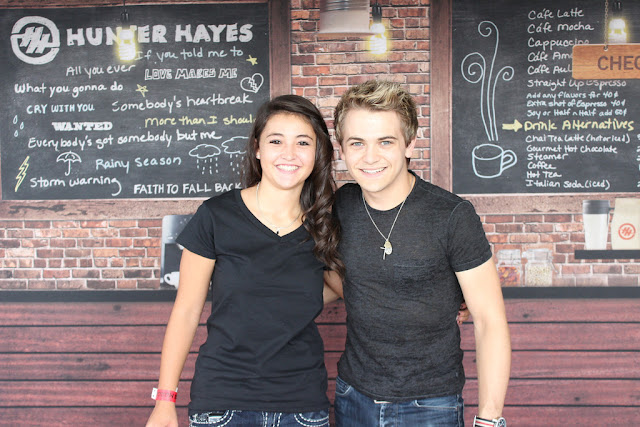 ...and her first Stampede dance, which she attended with Reese's daughter. Reese, Phoebe and I were in attendance as well and it was somewhat entertaining to watch the girls interact with one another, and, with the locals; while sipping drinks in the beer garden.

Wait, that sounded all sorts of wrong; what I meant to say was: Reese, Phoebe, and I were sipping drinks in the beer garden while watching the girls practice their avoidance techniques on randy teenage boys. And, by "avoidance techniques", I mostly mean that each girl, upon being approached by an undesirable suitor, would whip out her cell phone and proceed to text an S.O.S. to either myself or Reese, after which they simply waited to be rescued.

We were actually pretty busy with those rescues, and, on a couple of occasions, enlisted Phoebe to ride to the rescue in our place; an act we rationalized by claiming that it was good practice for when her own eight-year-old daughter is old enough to hit the dance floor (ten bucks says Phoebe just threw up in her mouth a little).

In yet another first, The Teenager wore her first pair of cowboy boots; I'm not even going to tell you how ridiculous the search for that particular pair of footwear was; suffice it to say: in the future I will check the Girls Shoe Department before paying twice as much money for a pair of identical shoes in the Ladies Shoe Department. Also, a little girl's size 5 is the same as a ladies size 6.5 and that shit's just wrong.

So, anyway; Stampede, the Usual: Saturday's parade was quite well attended. In addition to the usual crowd on my parent's front lawn, we got to meet fifty or so of my mother's high school classmates, who were in town to celebrate their 50th class reunion. Phoebe, Reese, and I made many, many jokes about how we were looking at our future, as one does. We also just enjoyed being together and watching the kids play, as usual. 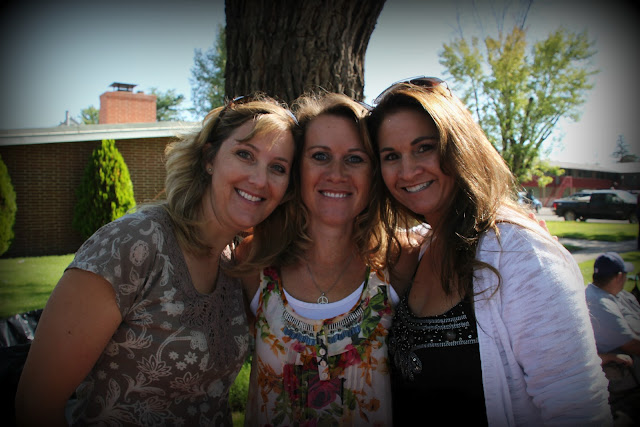 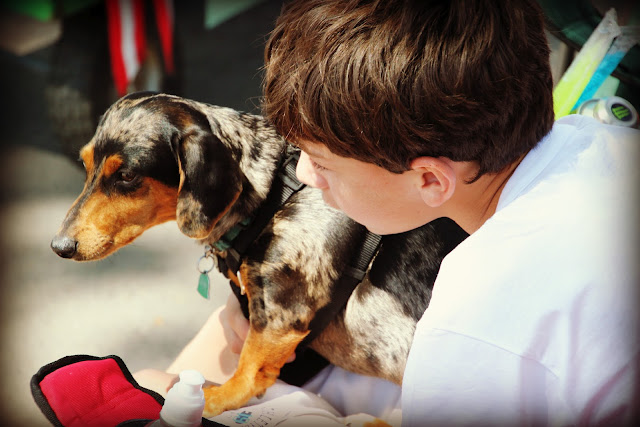 And, as usual, Smokin' Charlie sent shivers up my spine with his maniacal cackle, flashing eyes, and, tendency to stare directly at me with murderous intent (cue the usual nightmares; fucking Charlie). 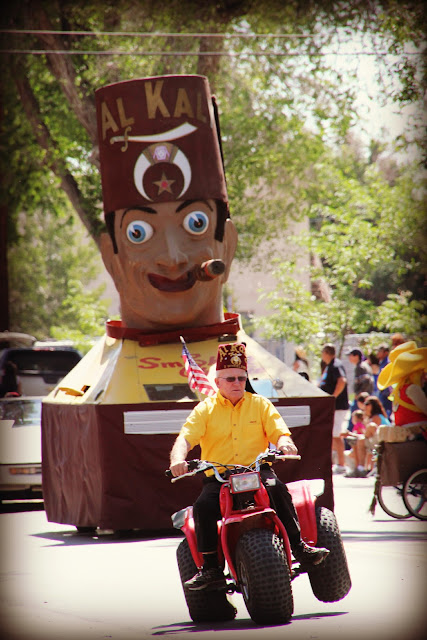 After the parade, the kids hit the carnival midway where The Teenager rode approximately two rides before becoming nauseous while the Man-Cub outlasted us all on ride after ride after ride. 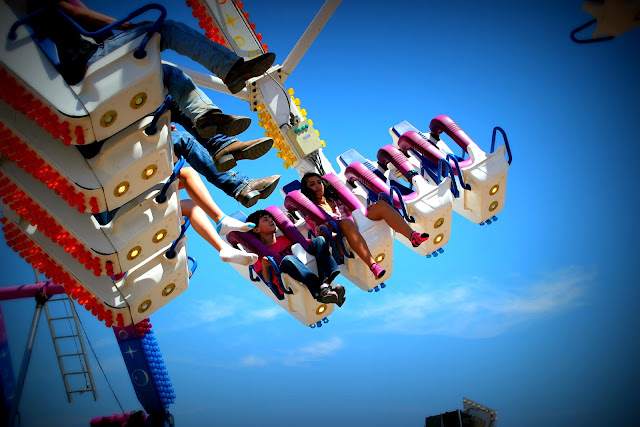 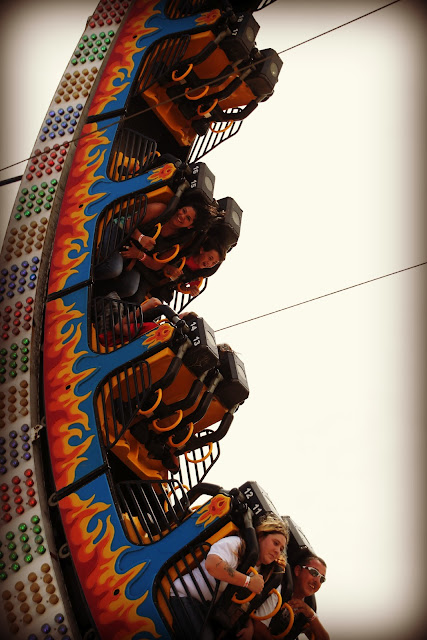 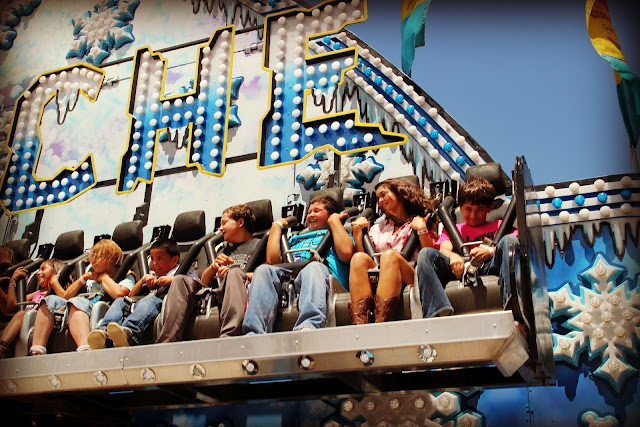 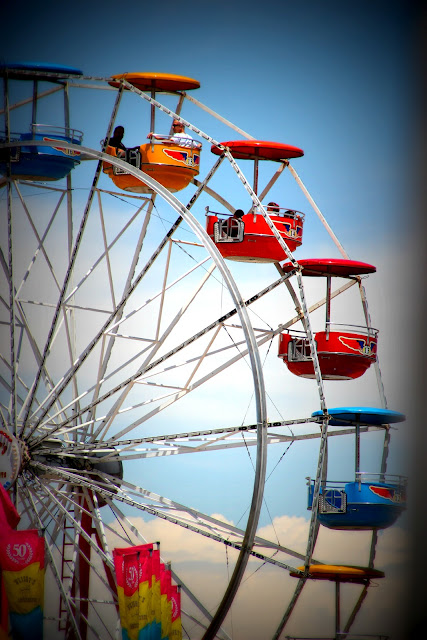 After the carnival, we went to the rodeo and then out to dinner and on to the dance I mentioned earlier.

Today, we capped off our weekend with one last rodeo performance and by indulging in our once-a-year treat... 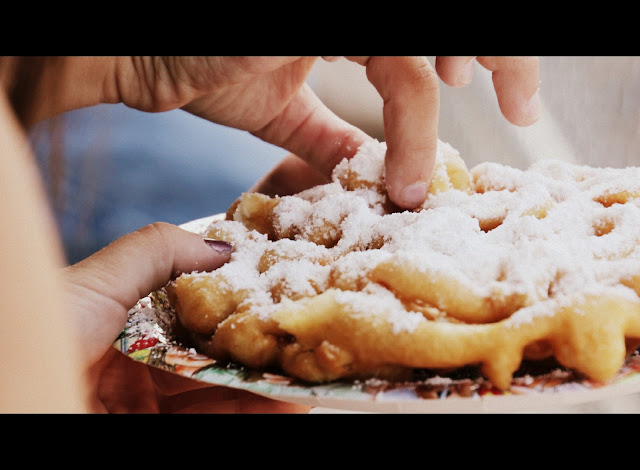 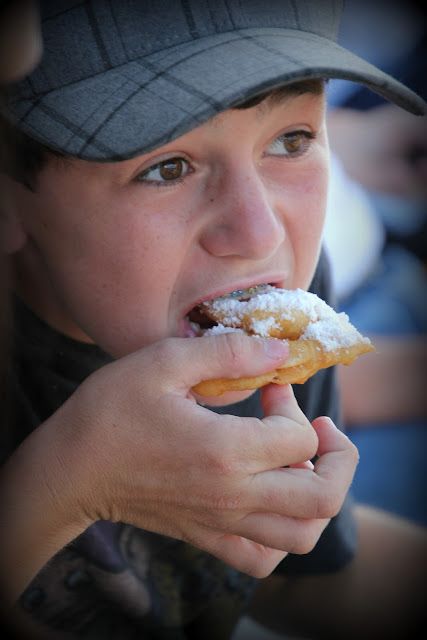 Tomorrow, The Teenager and I will head back home. The Cub will be staying with my parents until Friday, when they will bring him home just in time for Petticoat Junction's annual Corn Festival. And, while the corn festival will be fun, in it's own way; it doesn't compare to the fun that we always have at Stampede, and, I can say that now, just as truthfully as I said it when my dad offered a free ride to all the events.

Some things are just worth the price of admission.
Posted by Chelle at 10:58 PM