I Bet Cucumber Lowers Cholesterol. Too Bad I Hate Cucumber

I've admitted to being a less than stellar gardener this summer. Due to that fact, I fully expected less than stellar results in the produce department, so, the wealth of ginormous cucumbers that I have harvested over the past few days has come as a bit of a surprise.

I have mentioned that I don't like cucumbers, right?

In addition to the cucumbers, I harvested a large number of yellow pear tomatoes, which I plan to use in my favorite mock Caprese pasta salad this weekend. I was a bit disapointed in the number of red grape tomatoes that were ready to be picked, as I enjoy them in the pasta salad as well, but; maybe they will surprise me in the next day or two.

On a sad- and somewhat frustrating- note, I noticed the three or four tiny pumpkins nestled amongst the pumpkin vine. The discovery is sad and frustrating because I was really hopeful for sugar pumpkins with which to make my Thanksgiving pies, and, at this late in the season, there is no way that the tiny pumpkins will mature before they are killed off by frost. Insert sad face, here. 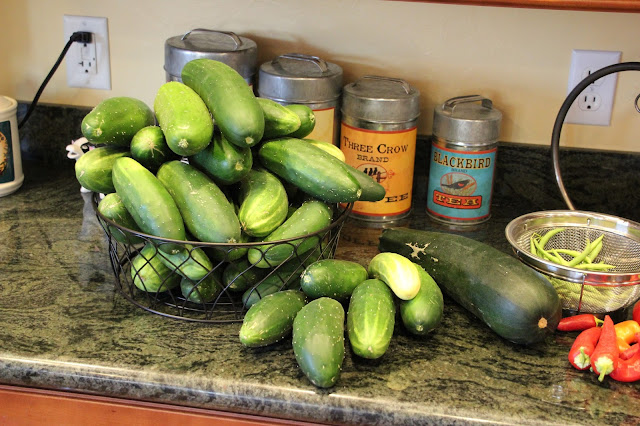 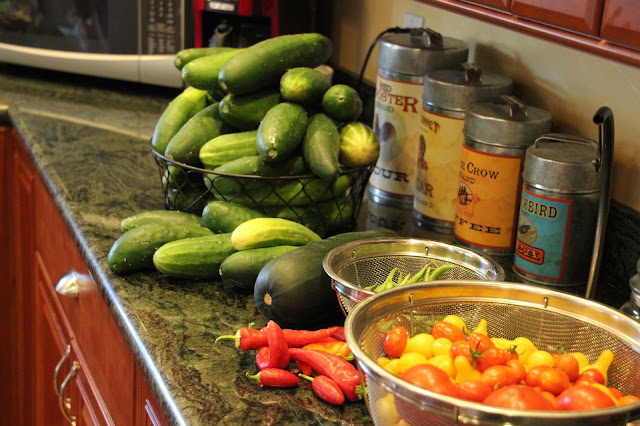 Changing topics, entirely; the Man-Cub's first High School football game is later today. He is technically playing on the Freshman team but has also been pulled up to play Junior Varsity, which is the team that will take the field this afternoon. He doesn't know how much he will play, but, I'm looking forward to attending the game to see.

I'm also looking forward to the long holiday weekend. The Teenager and several of her friends have requested that I take them to Neighboring City to shop for Homecoming dresses, so, that should be fun.

Hugh had hoped to pick up the pavers for our fire pit project, but, they have not come in yet, which, Hugh thinks is due to them not having actually been ordered by the business from which we had ordered, so; we may be looking for a different company and starting the entire process all over again. Insert angry face here.

If we have some time, we might try to take the boat out for one last float. Or, we might drive to a nearby town for a hike to a scenic lake. Or, we might sleep in and watch movies and catch up on scrapbooks while eating inappropriate and unhealthy snacks. We are undecided, is my point.

Speaking of unhealthy things; I got the results back from the blood draw that I had done at day job earlier this week. My results indicate high cholesterol and the marker for hypothyroidism. Yay, me!

Also, I suppose its time to schedule an appointment with my doctor. I wonder if he likes cucumber?
Posted by Chelle at 8:50 AM