It's been a little over a year since we brought Guinness into our home. He's come a long way from the skittish, scrawny lump of matted fur that he was when I first spied him in the cage at Petco. In fact, he has assimilated into the family like he was meant to be here, always.

He sleeps with me at night, curled up in a warm, snugly comma, perfectly fitting into the curve of my stomach. I have to be careful not to wake him when I reach for the alarm in the morning, although, when I do, he simply stretches and rolls onto his back for a tummy scratching before drifting back into a deep slumber. He is a big fan of the snooze feature, clearly.

He and Finnigan are the best of friends; they race around the house together like their tails are on fire, play aggressively with each other, and, when they are completely exhausted, they nap together, usually in a sunny spot on the rug in front of the French doors or on a windowsill, where they can catch the late summer breeze.

It goes without saying that he is a handsome boy, and, as I said, a perfect fit for the family. 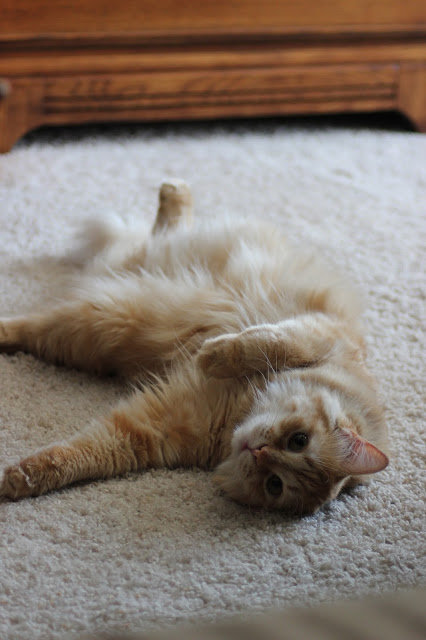 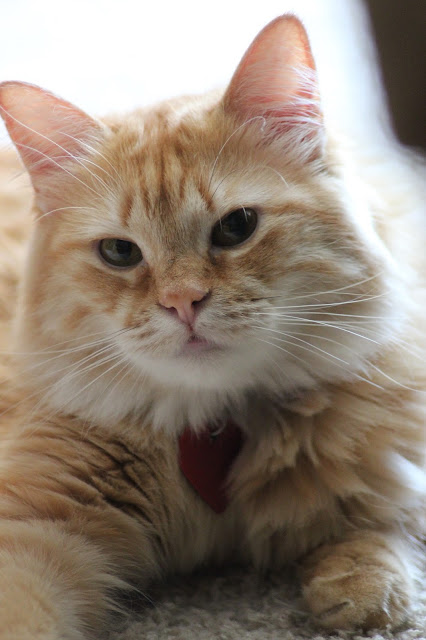 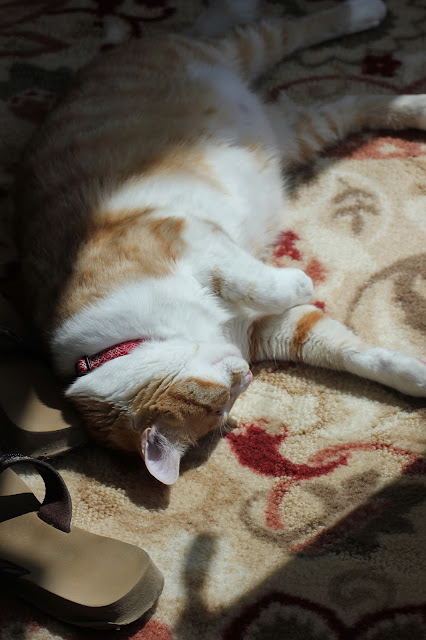 Finnigan, of course, continues to be his normal, aggressive, self. I'm pretty sure he thinks he's a dog. Every time the doorbell rings, he races to the door to show his dominance of the home by hissing and growling low in his throat. If our guests ignore him, he quickly determines that they hate cats and he must, therefor, rub against them and make them love him. If, however, a guest immediately coos over what a big boy he is, how handsome, etc., and tries to make nice; he smacks at them and does everything in his power to strike fear into their hearts. Several Porch Night ladies have experienced this behavior, first hand, and; I'm not sure they will venture from the porch into the house ever again.

On the one hand, that's disconcerting. On the other, sort of hilarious.

All in all, I would say we lucked out in the cat department. We got the best of both worlds: a love bug and a cat-dog.

It's all about balance, I suppose.
Posted by Chelle at 7:42 AM