Cherry-O and a Bottle of Wine, Mate!

Yesterday, I joined Jana, Granny, Kaley, and Kaley's boyfriend, Isaac on a cherry-picking excursion to an orchard just outside of Pixler. I had never been cherry picking before and I was almost more excited about the prospect of spending half as much as I have been spending on cherries in the grocery store than I was about the actual excursion itself, but, the excursion was AWESOME! It was also Isaac's first time, and, if you don't think that I made several raunchy jokes about being cherry-picking virgins out to pop our cherries, then we have never met before so; hello, my name is Chelle and I am grossly inappropriate in mixed company.

All crassness aside, it was an absolutely perfect morning for cherry picking-sunny, but not too hot, with a light refreshing breeze that acted as an air conditioner when we got a bit sweaty from our efforts. And, what did those efforts produce? 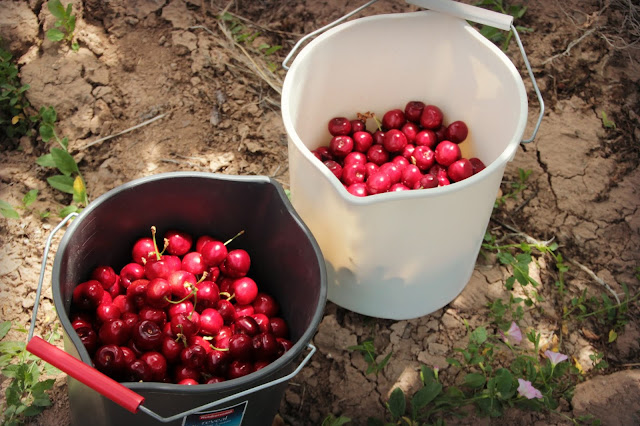 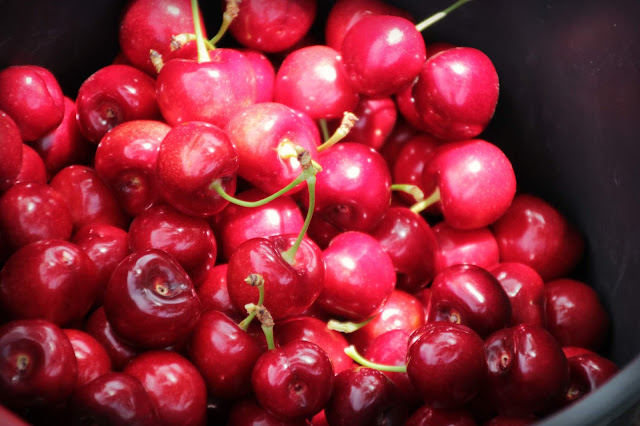 In the hour and a half that we were there, I managed to pick fifteen pounds of cherries. Fifteen pounds! People, I am going to have cherries for days! Actually, I picked way more than fifteen pounds, but, fifteen pounds made it into the bucket that I paid for (good thing they don't weigh the pickers on the way out; I ate at least another fifteen pounds in the name of "taste testing" each tree).

In the end, I paid $26, which, I am embarrassed to admit, is close to what I paid for two small bags of cherries at the Hellmouth just last week. As I said, I was really looking forward to economizing my cherry habit. And, I was with people I absolutely adore! I can think of no better company with whom to pop my cherry (see? The twelve-year old boy in me just cannot resist the locker room humor). 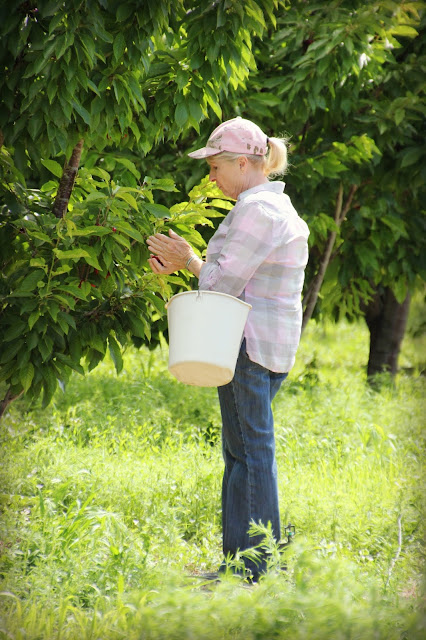 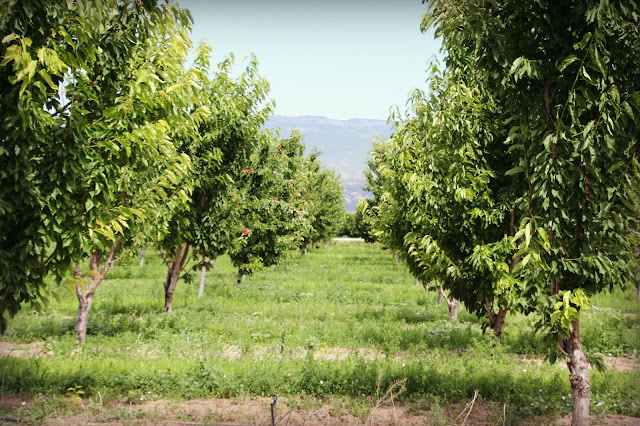 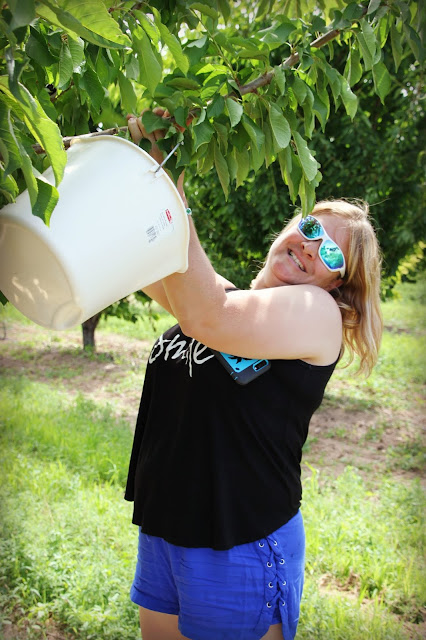 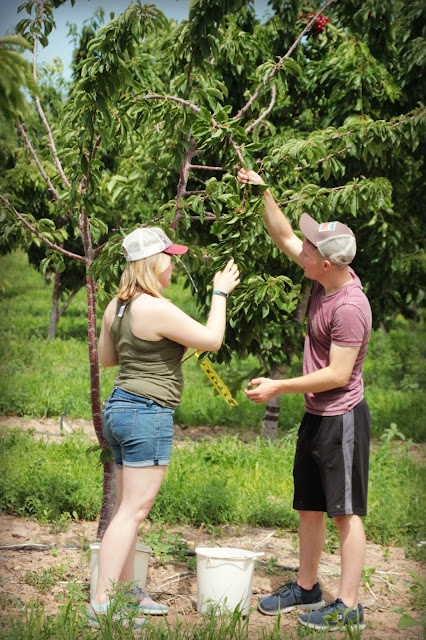 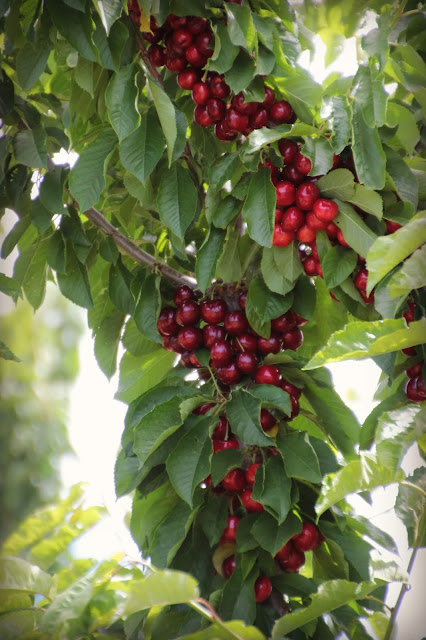 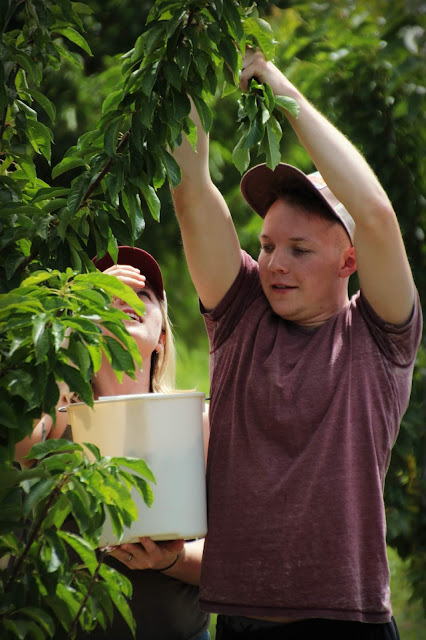 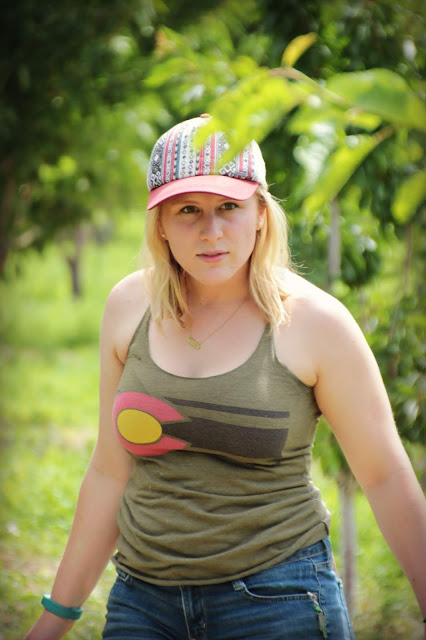 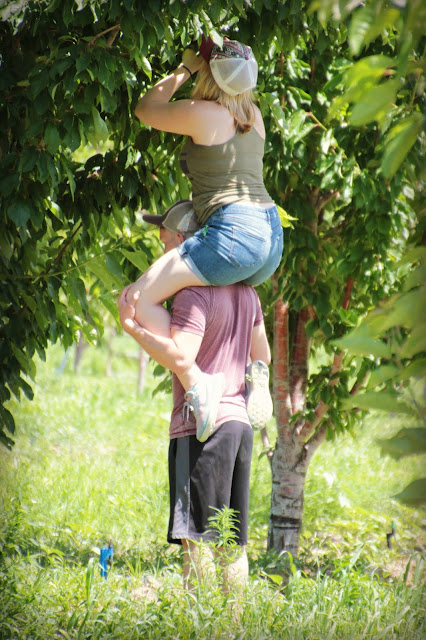 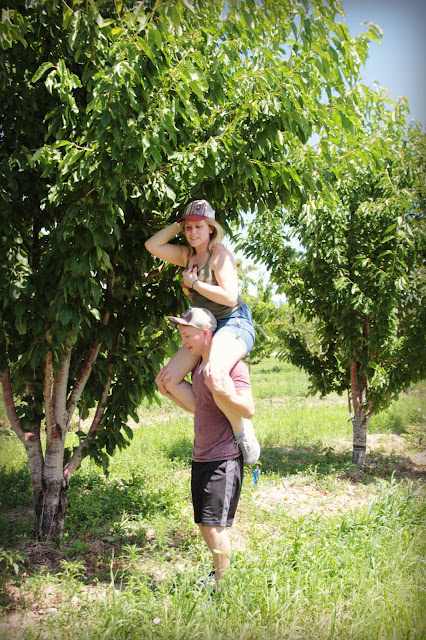 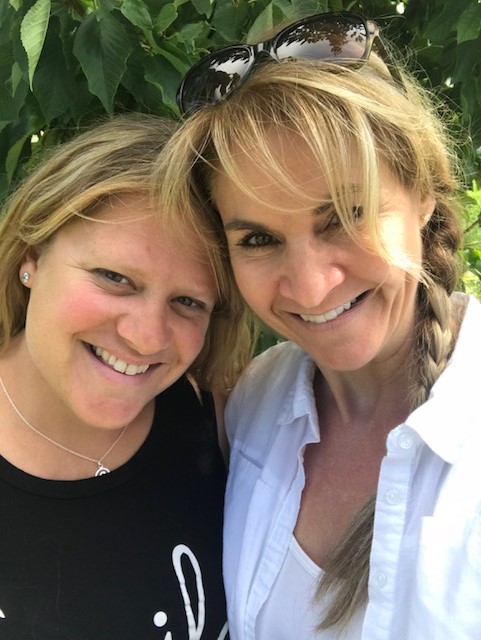 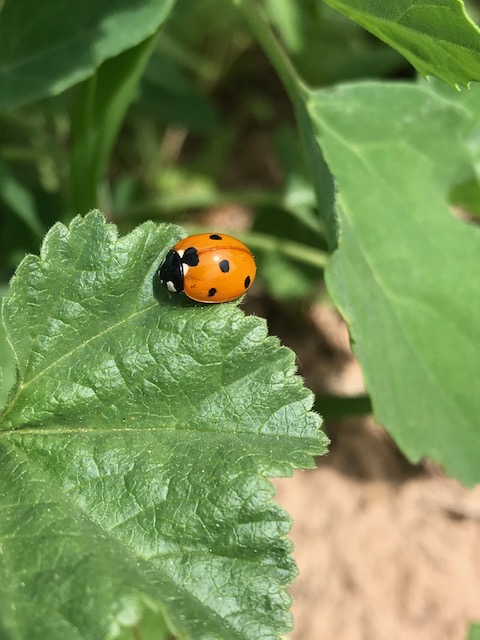 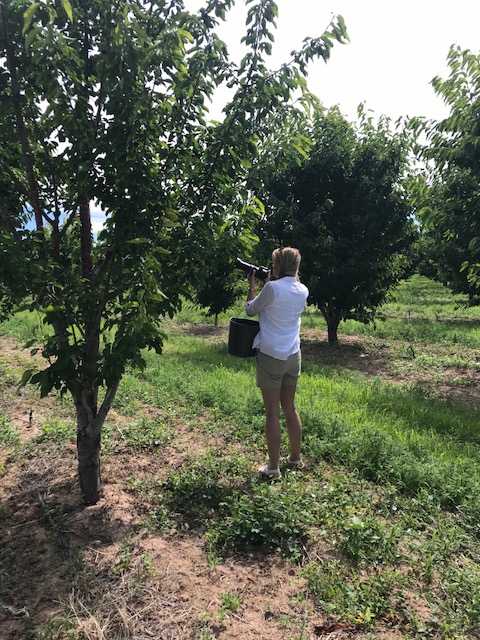 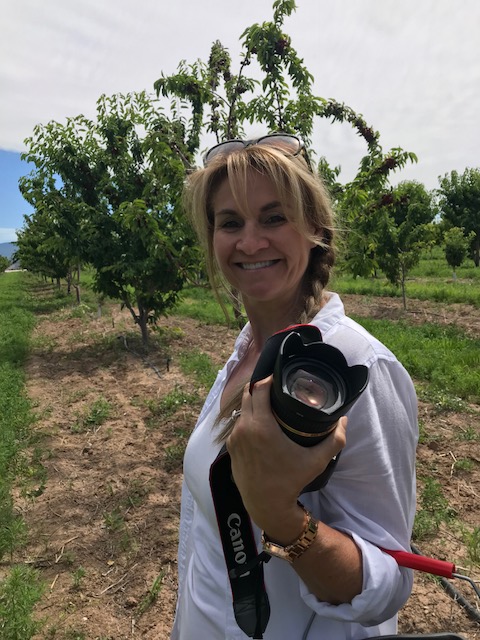 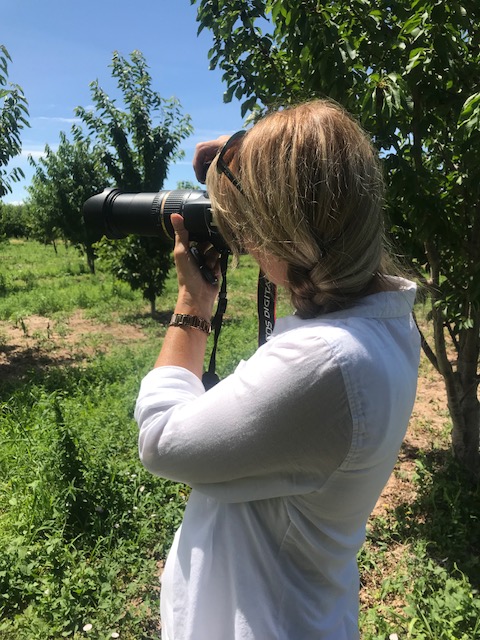 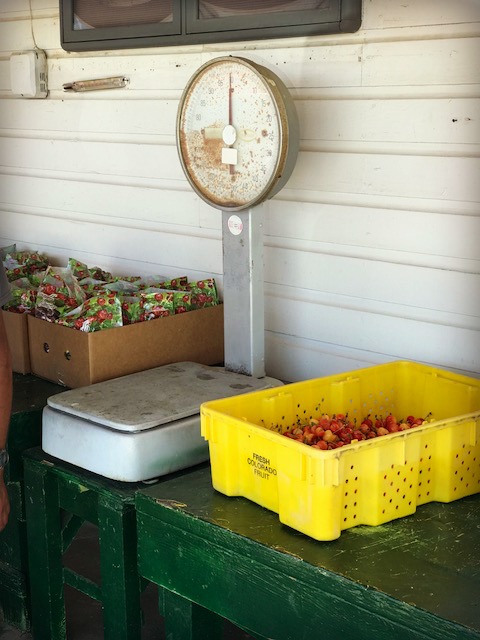 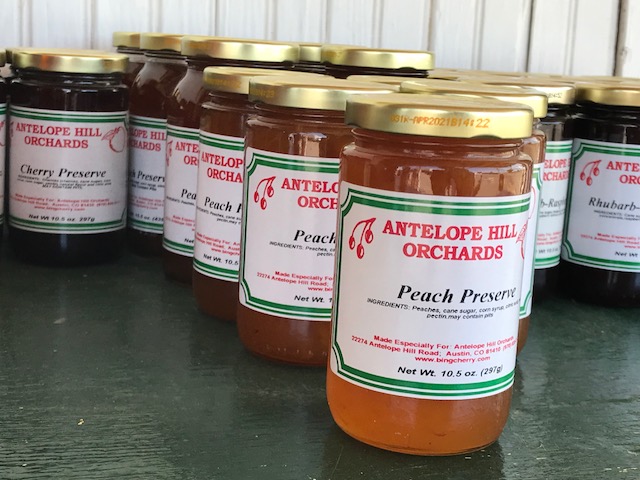 After we wrapped up our morning in the orchard, Jana and I said goodbye to Granny and company and we headed out on a road trip all Thelma and Louise style (minus a young Brad Pitt and tragic suicidal ending). We drove to wine country, where we visited Queen B at her winery. 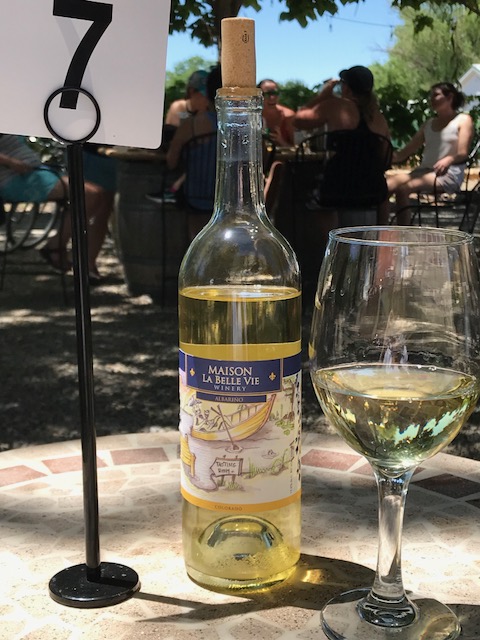 We had picked up a wine country brochure in a convenience store that we stopped at upon leaving the orchard; it included a fabulous tutorial on how to taste wine, so, naturally we made a quick video to help guide wine newbies through the process. We're super helpful like that.

Then, we sat back and enjoyed a bottle of white and a charcuterie board while soaking in the sunshine and reminiscing about all of the many adventures that we have had together and planning for the next one ; let's just say that that wine country brochure is about to become quite well-used.

I just love this friend of mine. 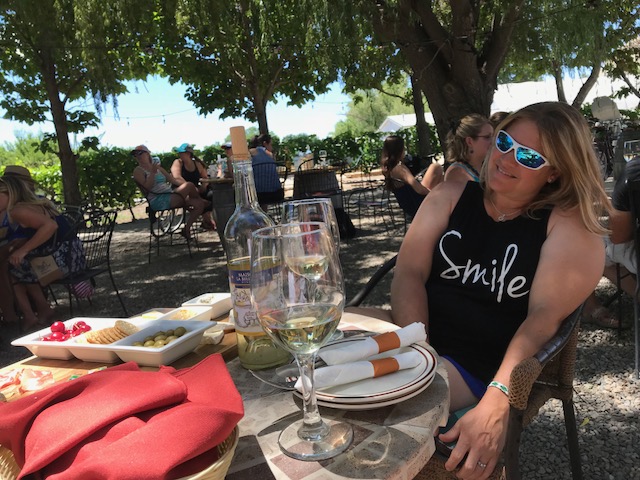 She certainly took what could have been a pretty crappy weekend (given that whole unfortunate incident on the highway) and turned it into a fabulous memory. Insert allll the heart emojis, here.
Posted by Chelle at 9:00 AM