It's finally springtime, y'all! And, in true Colorado bipolar fashion; we've had sunny days with temperatures in the 70's followed by snowstorms and freezes. As you may imagine; it makes dressing for the season quite the crapshoot.

Anyhoodle, as always, I am linking up with Sheaffer and Shay; thanks for coming along!

In my quest for a healthier diet, I have been consuming more vegetables and lean proteins and trying to limit my intake of carbohydrates; I have been mostly successful. I have been 100% successful at avoiding refined sugar, however. Not a single donut, cookie, piece of candy, etc., has passed these lips in over a month. Now, do I still occasionally crave a donut? Absofreakinglutely. Willpower for the win! 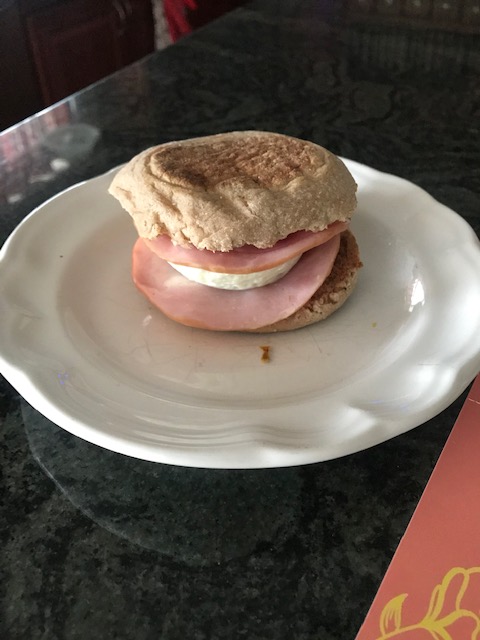 This breakfast sandwich is a go-to on the weekends. 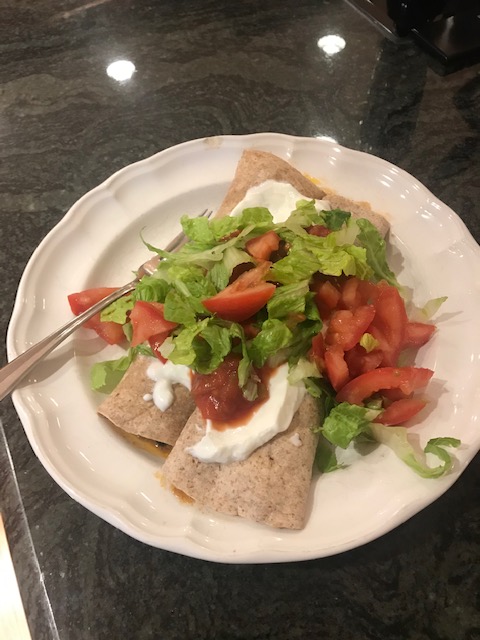 These burritos are made with low-carb, whole grain tortillas, filled with jalapeno black beans and topped with Greek yogurt, salsa, lettuce and tomatoes. They are one of my favorite dinners when I am watching what I eat. 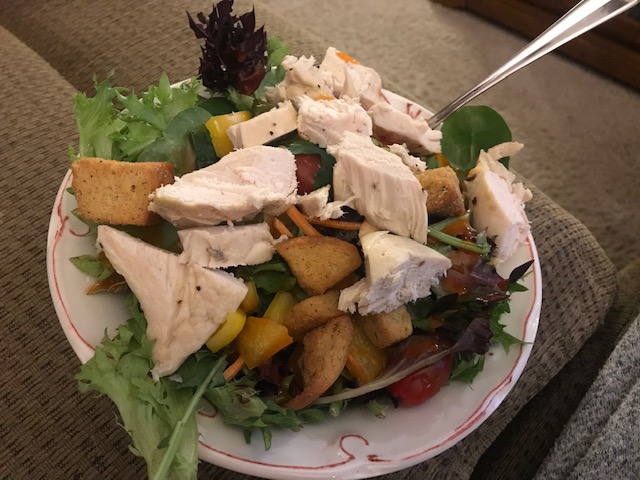 Salad topped with rotisserie chicken breast and dressed lightly with a low-sugar dressing has become a staple of my diet. 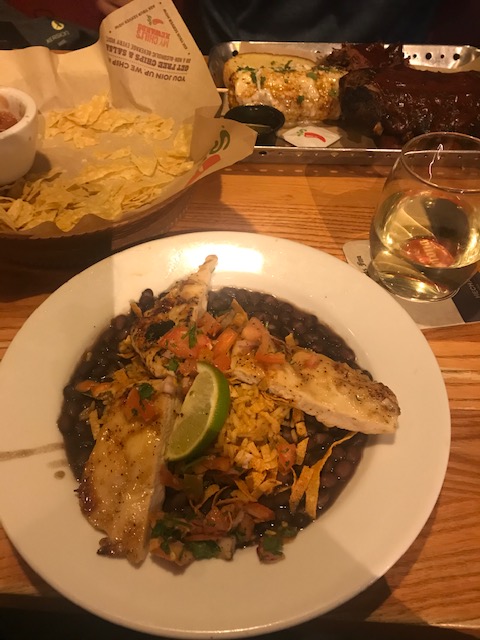 When I've eaten out, I've been really careful to stay within my calorie budget; the margarita grilled chicken from Chili's is perfect for that. Plus, it tastes really good; I am a huge fan of lime flavor on chicken.

Facebook keeps reminding me that we were vacationing in Maui in March of 2019. Since that is the last family vacation we took (and my, last trip, period), the memories are bittersweet, but; I would go back in a heartbeat. 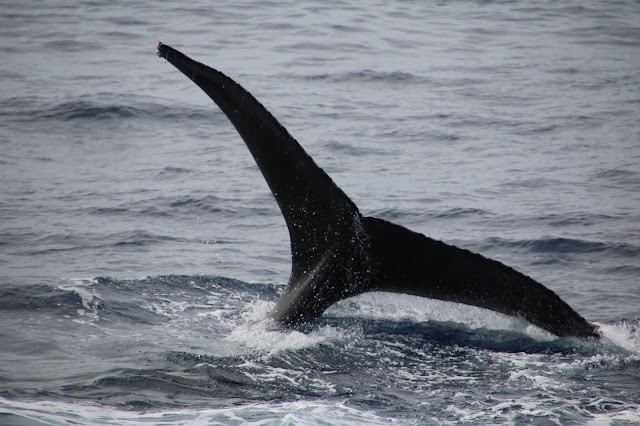 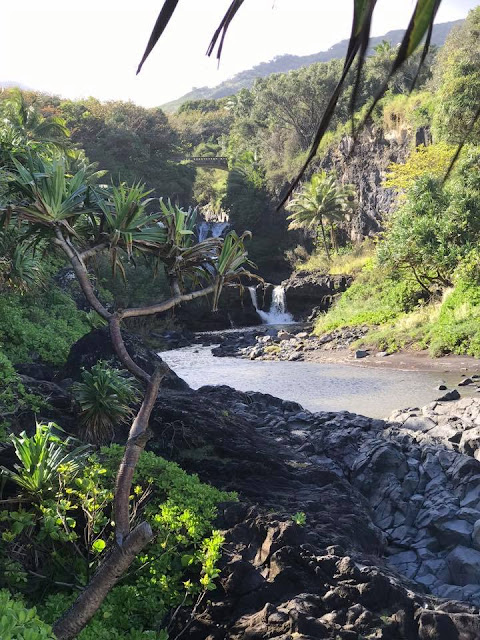 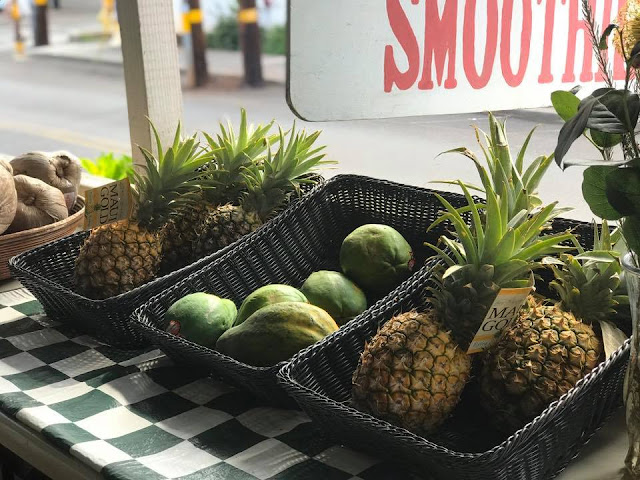 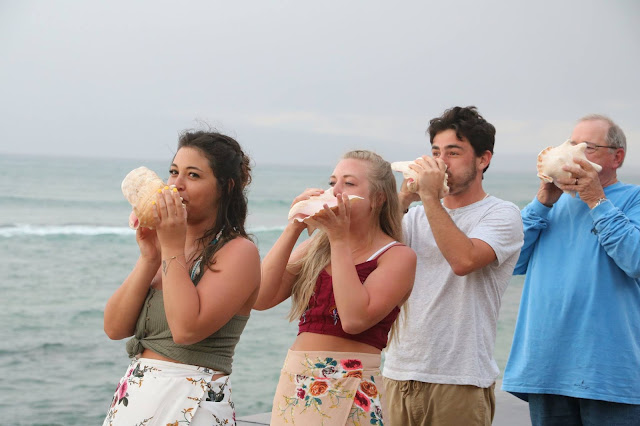 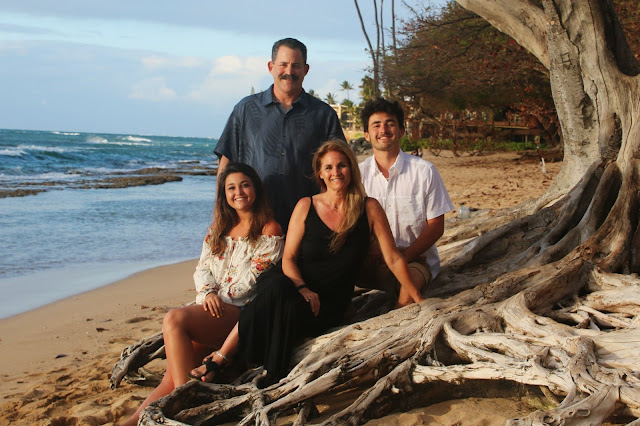 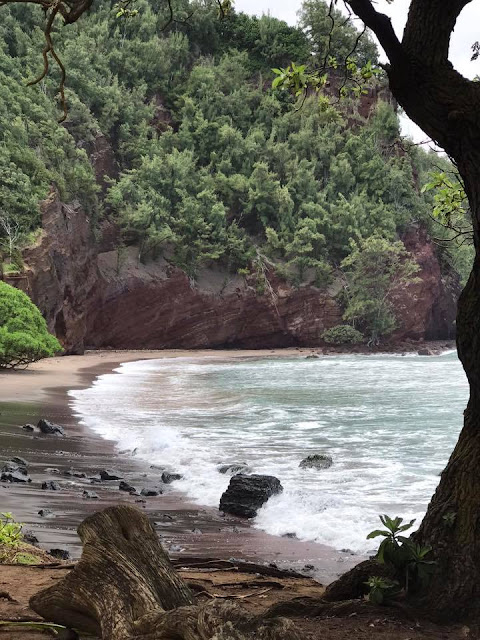 I recently purchased sealing wax and a few wax stamps, and; I am having fun using them on letters, cards, and other things (and, by other things, I mean anything I can find that looks like it could use a cute wax seal. I may have a problem).

I had a wax sealing kit when I was a kid; it was a gift from a friend who had moved from our small town in Colorado to a city far, far away, in Maryland. At the time, I thought that getting a package from someone who lived clear over on the other side of the country was the most sophisticated thing, ever; the fact that it contained something as unique as a wax sealing kit was a bonus. I loved that set and used it until the last of the wax was just a tiny stub. Mostly, I used it on letters to my friend, until we eventually lost touch; her name was Debbie Feiger and I still wonder what ever became of her. 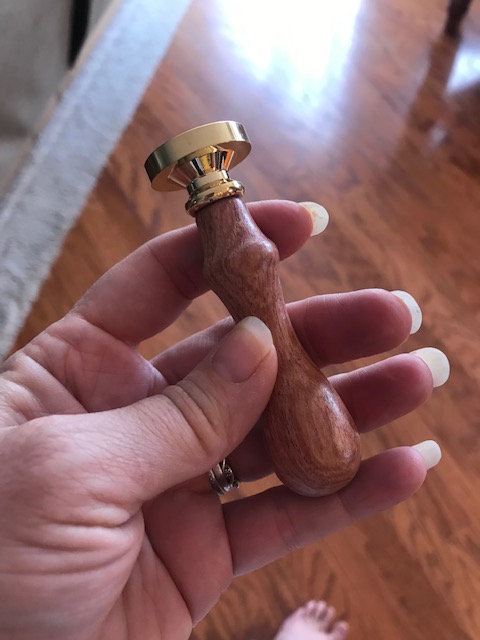 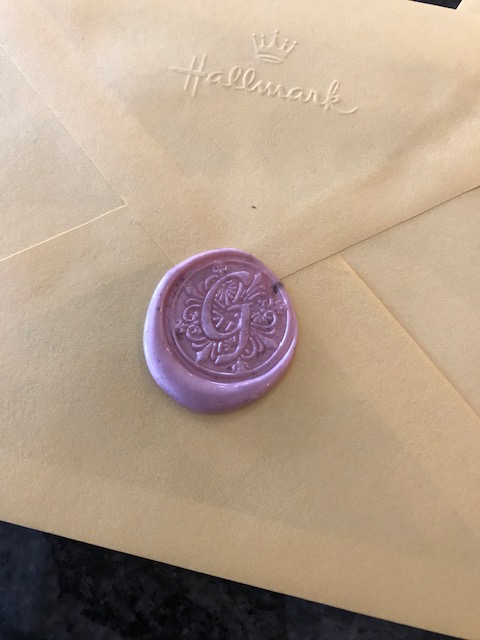 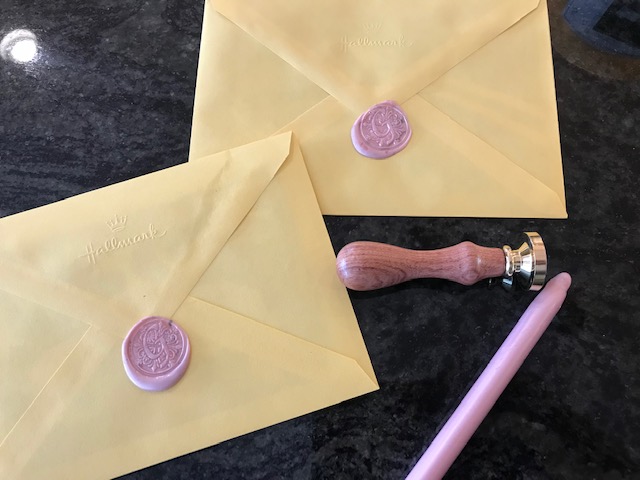 I'm also loving my Easter decorations. I put them up in late February to bring the illusion of Spring into the house; a goal they accomplished quite nicely, and, I'll be sad when it's time to put them back in storage next week. 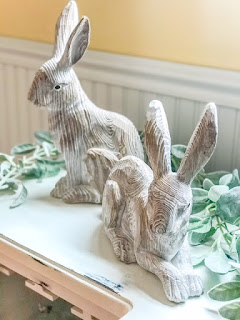 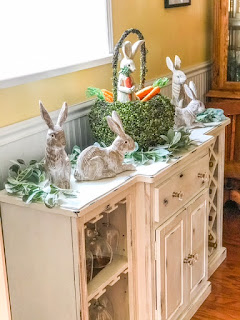 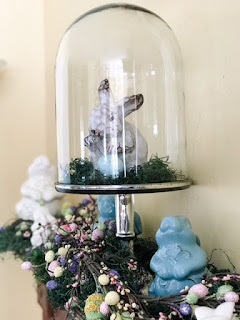 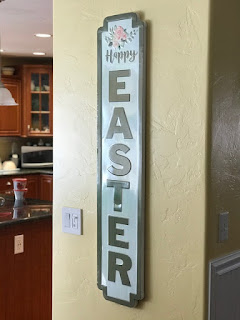 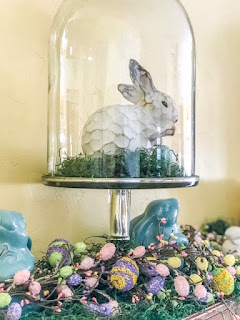 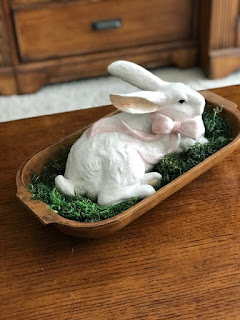 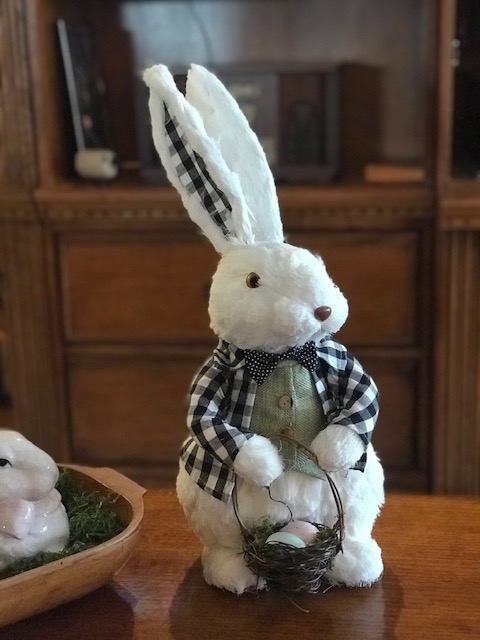 I recently sent the kids their Easter care packages. This time around, I included Mom's recipe for deviled eggs and the ingredients to make them, including electric egg cookers (minus the eggs, of course; doubtful that they would have made it to Hawaii and Texas intact). I also included egg dye kits and plenty of candy, along with puzzles, games, and other fun stuff that I knew the kids would like. Then, because the "kids" are actually adults, I threw in cash, because like all adults; they have bills to pay and paying the bills doesn't leave a lot left over for fun. I want them to have at least a little bit of fun. 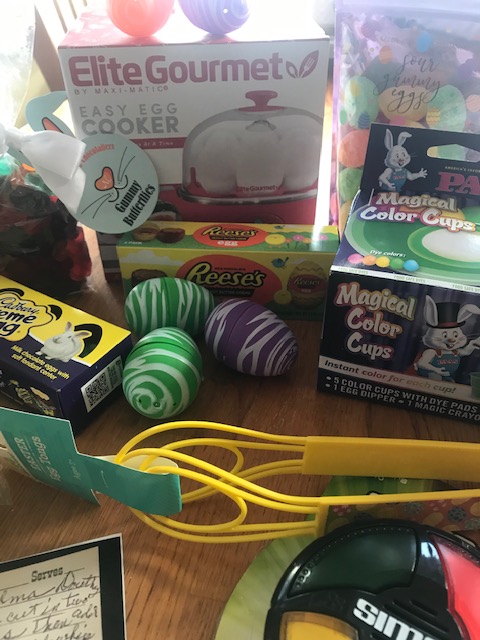 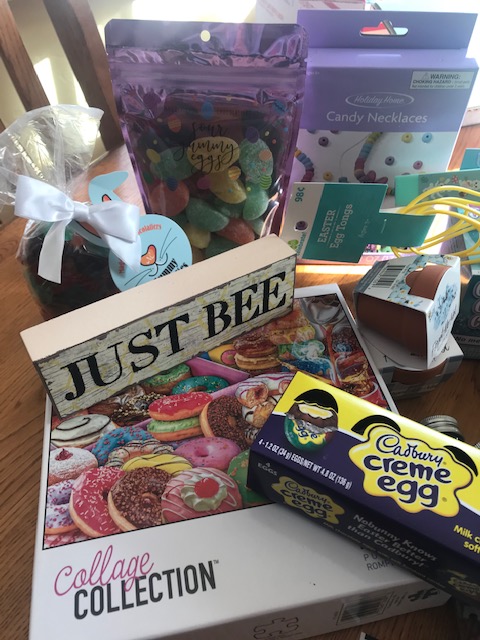 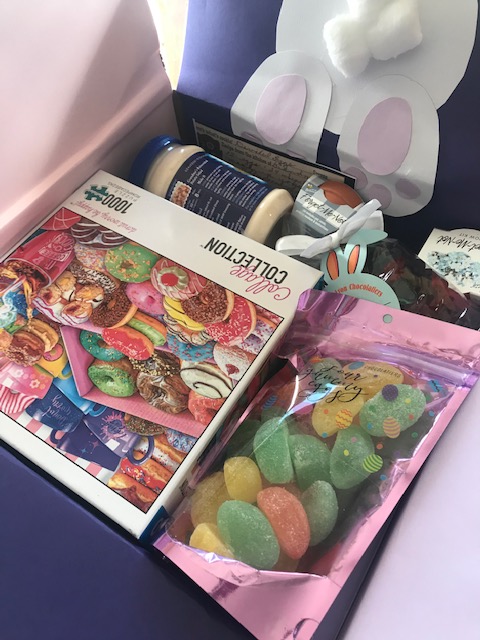 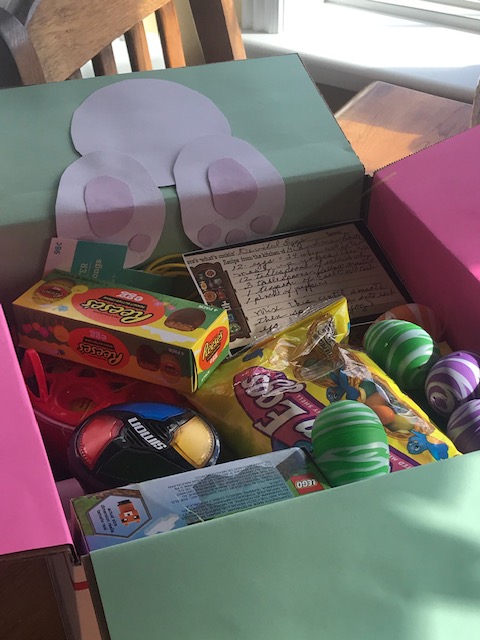 I'm still working on self-care. Last week, I visited a functional medicine practice for a consultation with a doctor who is an expert in hormone replacement therapy, utilizing bioidentical hormones. He ordered a number of blood tests (requiring the extraction of four vials of blood) and prescribed a cream containing both estrogen and progesterone, to begin with. I'm pretty nervous about side effects, but I'm more worried about the treatment not working at all; I really need to see some improvement. Fingers crossed (also, if anyone out there has any experience with bioidentical HRT; I would love to hear about it).

My wonky hormones leave me in a near-constant cycle of dread, despite having nothing specific over which to fret. I am very hopeful that the HRT I am have just embarked upon on will help to reduce, if not eliminate, the vague feeling of doom that I am currently harboring. It would be really nice not to walk around feeling like the other shoe is going to drop at any second.

Hugh and I closed on the sale of the house in Neighboring City yesterday! We got $5,000 over asking price (which was already $150,000+ over what we paid for the house six years ago) and the buyers paid our share of the closing costs, so; we made out like bandits. Our plan is to pay off Hugh's truck, put a chunk of money toward the principal on our house mortgage, set aside enough to fund our trip to Hawaii for the Cub's graduation in December, and then to save the rest (this is all after we pay what is expected to be a large tax bill, unfortunately).

I'm really excited about getting out from under that house, even though it came at the expense of having Queen B move several states away (she's doing great, by the way!).

I feel like I've exhausted Netflix's catalog of offerings and have moved on to Amazon Prime video, where I watched Eddie Murphy reprise his role from Coming to America. 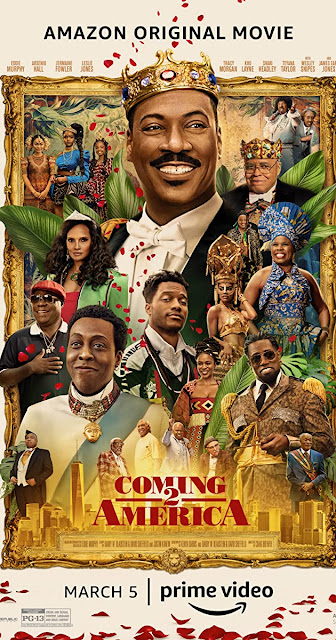 Coming 2 America was a really fun sequel to the original. I didn't even know Arsenio Hall was still alive, so that was a nice surprise.

I also watched The Map of Tiny Perfect Things, which was really good. 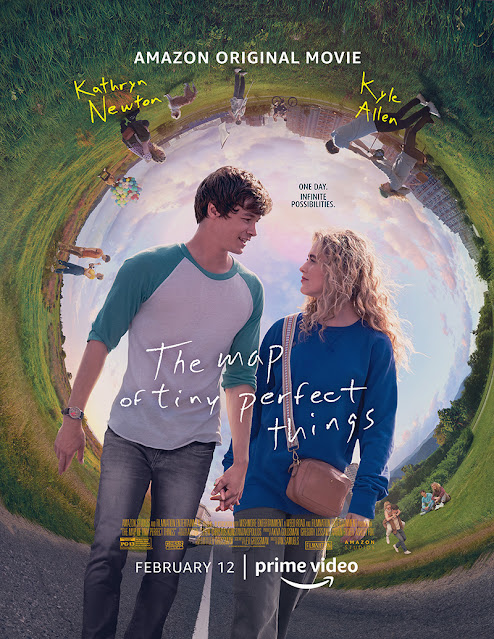 Then, just for fun, I rewatched an old favorite... 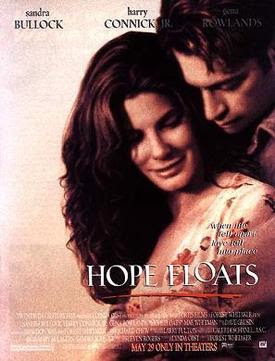 Unfortunately, I've been too busy to read again this month, unless you count journal articles that I am required to read for work, which, I don't.

Currently, I am listening to the sound of birds outside the window. That's another sign of spring that makes me happy.

Still in leggings and other comfortable attire. I did introduce white jeans to the rotation recently, however (progress!).

Kristi and Erin are getting married on Saturday! I'll be donning a lovely purple dress for the occasion, being that I am the Best Woman and all. I'm so happy for them and can't wait to stand up for them; both of their families are less than enthusiastic about the event so they need as much support as I can give. Spoiler: it's a lot. 100%, to be exact.

Sunday is Easter, of course. This year will look completely different than in any year past, since neither the kids nor Mom will be here to celebrate with us. I'm not planning to do to much in the way of cooking, so Hugh and I will probably look into going to one of Hooterville's nicer restaurants for brunch, assuming they are serving brunch. We'll see.

As the weather gets nicer, I am hoping to attend some outdoor antique sales with BCPE (that's Booster Club President Extraordinaire, for those of you who are new to this blog, although; since she is almost officially an empty-nester, and will be leaving her role with the Boosters in May; a new blog nickname may be in order).

I'm also hoping to bust out my new picnic basket for some Old School mountain picnics with Jana (we used to take the kids frequently, and, while they gathered pine cones and searched for bugs; Jana and I would relax while eating good cheese and sipping on wine. I see no reason why we can't recreate those days minus the children).

I know Hugh is looking forward to pulling the four wheelers out of the garage for some trail riding, so, I'll probably get to use the picnic basket for that as well. I am determined to make the most of my investment in it since it wasn't exactly cheap (nor were the four wheelers, which is why we also need to get the most use out of them).