Saturday morning I was up with the sun to see The Teenager off on her volleyball road trip. I wanted to go watch her play but, Hugh was working for the police department and I had to take the Man-Cub to his football game which was originally scheduled as a home game but which had been moved to a neighboring town.

Apparently, the reason for moving the game in the first place was the fact that our school had volunteered to let two opposing teams from opposite ends of the state meet in the middle to play their game on our field, a conflict that our activities director thought would tie up the field for our game. However, we were scheduled to play at 10:00 while the high school game was scheduled for 1:00, leaving plenty of time for us to play, had she just consulted the school athletics director. So, we hustled back to Petticoat Junction for the game only to discover that the activities director had cancelled the referees, leaving us with no officials and no way to play an official game. So, the boys scrimmaged the other team while the parents fumed in the stands. 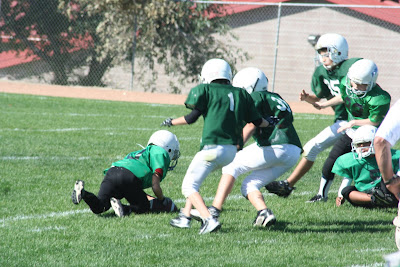 Which, doesn’t mean shit since there were no referees and therefore it was not an official game.

Boy would I love to be a fly on the wall of the activities director’s office when she starts listening to her voicemail messages this morning.

Anyhoodle, after that debacle, the Cub and I did some grocery shopping and then headed home where we spent the day cleaning the house and working in the yard while waiting to hear from The Teenager (they won! Both games! And, she got to start!!!).

Sunday, I was busy making candy monkeys for the Man-Cub’s upcoming birthday party. I’ve never crafted candy before and the process was a wee bit nerve-wracking for me but, in the end, it all worked out. 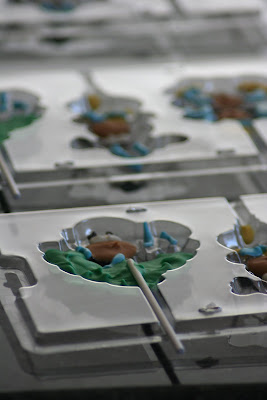 These bad boys will go on the cake that we are taking to the amusement park in Neighboring City. Later, since I was feeling so smug at the success of my craftiness, I made 42 invitations for a dinner that we are hosting for The Teenager’s volleyball team next week.

And, that pretty much used up every bit of energy that I had left which probably explains why I am dragging ass this morning.

I’m sure the fact that it’s Monday has nothing to do with it.