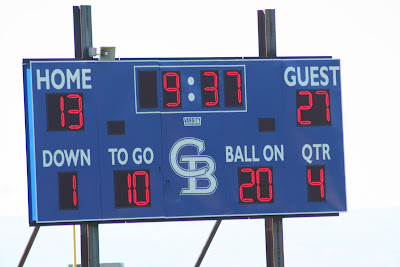 Except, when it does but, I’ll get to that in a minute.
After much bureaucratic bullpucky and nonsense, the boys finally got their official game jerseys at yesterday’s practice and, you never saw a team of kids more excited to take the field than this group was today. 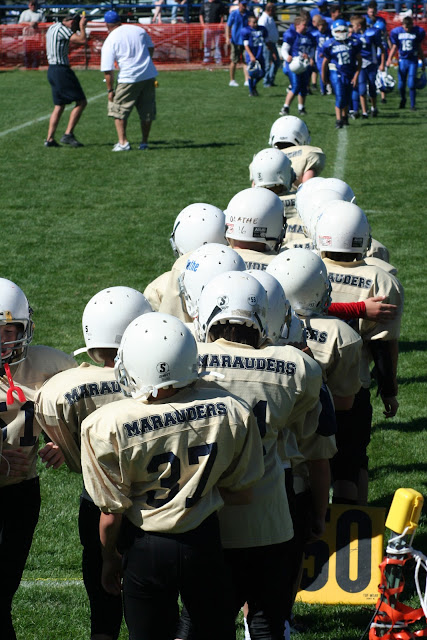 They looked stylin’ and they were pumped to win; it probably didn’t hurt that they were all still cranked up on sugar, courtesy of the football-shaped sugar cookies the Man-Cub insisted I provide at last night’s practice since, you know, it was his birthday (and, he’s a pre-teen, now, Mom! A pre-teen!). I argued that I shouldn't have to slave over cookies since his birthday had actually been on Thursday but, since they didn’t practice on Thursday and, since his party isn’t until Sunday; the Cub apparently decided to call it a birth week and, well, it’s hard to argue with someone demented enough to think that they deserve an entire week to celebrate the day on which they were born and, as usual, I totally digress.
Anywaaay, as I said, the boys were pumped. Unfortunately the other team hadn’t yet gotten the memo about this being the Marauders day to triumph and, they started the first quarter with back-to-back touchdowns. 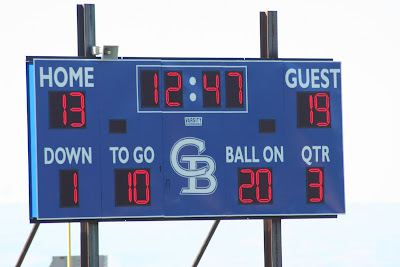 as there had been no additional scoring on our side, we were a bit confused. Our confusion only deepened when, a mere minute later the scoreboard magically read 13-20.
As we waited for the other team to notice the error, our boys made the point moot by scoring another touchdown, making the score 13-27 when, in actuality it should have been 13-20 which meant we still won the game but, um, an accurate accounting of the score might have been nice.
For the record, the other team never noticed the error. Not one spectator noticed it, not one coach, not one player so; maybe the Point Fairy visits there on a regular basis and nothing phases these people, whatever.
So, we won but, not without some sacrifice as, once they started to lose, the other team started playing rather dirty, going so far as to snap the wrist of our starting quarterback on a late hit. It was not a pleasant thing to witness but, he’s a tough kid and I’m sure the story of how he was carried off the football field in an ambulance will become legendary first-date fodder. Let’s just hope his parents have Aflac.
As for us, we got off lucky; while the Man-Cub was tackled numerous times, he managed to bounce back up in a most Gumby-like fashion and we have no injury to report unless you count a sprained elbow from patting himself on the back a little too aggressively. 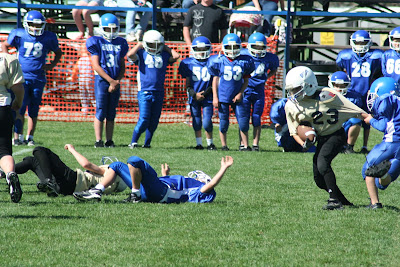 Eh, he earned it. 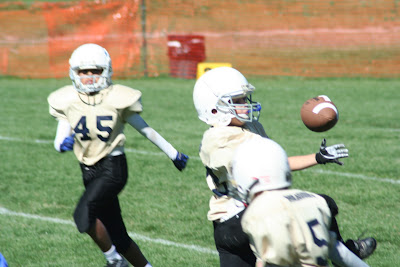 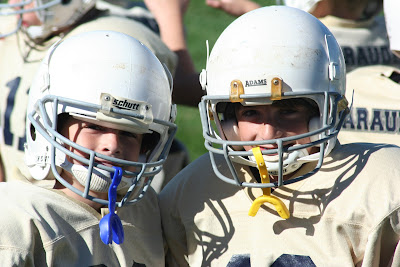